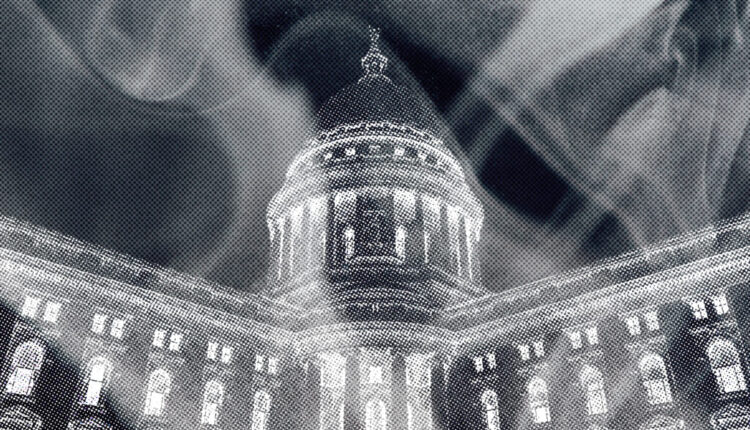 The arguments against Ald. Juliana Bennett’s proposed ban obscure the realities of this “less-lethal” weapon and its use.

In 2020, the Madison Common Council considered banning the Madison Police Department (MPD) from using tear gas, mace, and other less-lethal weapons. Alders requested a report on tear gas use from MPD, shrugged, and walked away. Thanks to District 8 Alder Juliana Bennett, the Common Council is considering the ban once more.

As I read through my neighbors’ takes on Nextdoor and articles about the ordinance Bennett has proposed, I noticed the current conversation is dominated by people who haven’t been harmed by so-called “less-lethal” weapons. Many protestors avoid speaking publicly about the kinds of protests where tear gas is used due to safety and privacy concerns—both for themselves and their fellow protestors. Anonymity is a shield against retaliation from the police and supremacist groups. It’s Protest Safety 101.

I have never spoken publicly, for that very reason, but the reality and compassion missing in armchair debates is too troubling for me to remain silent.

Before I jump into my story, I’ll note this discussion primarily centers tear gas (AKA CS gas) and summarize the main points I’ve heard from my neighbors who oppose this ban:

First of all, if tear gas is supposedly so rarely used, what’s the harm in banning it? The usage statistics from the report the MPD submitted to the Common Council in January 2021 are misleading on multiple levels and should not be stated like a mic drop in this debate.

MPD’s report only extends to August 1, 2020. In late August 2020, I was tear gassed in Madison while protesting the police shooting of Jacob Blake. I am not represented in MPD’s report, and I’m not the only one.

That night, the police gassed an entire crowd of nonviolent protestors despite having already swiftly apprehended the only people damaging property at that time. There was no warning or attempt at de-escalation, but then again, what was there to de-escalate? The crowd was standing still and did not pose a physical threat to the officers. It didn’t matter. Next thing I knew, everything was burning and I couldn’t see. I had been standing peacefully on the ally perimeter and another protestor had to pull me to safety.

It’s been almost two years since that night. I’m still horrified and I still question why police used that force. It wasn’t crowd control. It was cruelty. And my personal kicker? This happened right outside the apartment building where I lived at the time. (I can’t go into detail, but let’s just say The Law was more interested in treating me as a victim of the protestors than a victim of the police.) The response to property damage, which is not inherently violent and has been used as a method of civil resistance throughout history, should not be violence and indiscriminate use of force. Madison’s narratives about the 2020 protests tend to privilege downtown business owners dealing with smashed windows and stolen inventory, and tend to minimize the real harm police injured upon protestors.

If the ban doesn’t pass, it’s likely MPD will adopt the Quattrone Center Report’s recommendation of only allowing tear gas “cautiously, using it only when people are at risk of imminent physical harm or to prevent substantial property damage.” While these guidelines sound reasonable on paper, I don’t trust the MPD’s assessment of such subjective terms. While MPD’s current procedure for Demonstration and Assemblies includes “we protect people first and property second” as part of the “Madison Method” for crowd control, “Preventing substantial property damage” (language recommended by the Quattrone Report) was likely the justification for gassing the crowd I was in—despite the building in question being incredibly difficult to substantially damage. 99 times out of 100, I think they’d do it again. I’m also concerned MPD officers could interpret a BIPOC group as “a risk of imminent physical harm,” and I’m not willing to gamble on exactly how racist cops might be on any given day.

The omission of the August 2020 protest isn’t the only misleading aspect of MPD’s tear gas report. The report also counts the May/June 2020 protests as only one incident, even though the MPD reported throwing 53 CS canisters and firing nine CS projectiles over multiple days—a record high of 62 total compared to 77 total from 1990-2019. Only four canisters were used during the other reported crowd control incident, which was a rowdy Halloween weekend on State Street in 2002. For anyone who doesn’t look past the surface level, these two instances of “crowd control” look the same.

Truly, MPD used a shitload of tear gas in 2020. I can’t emphasize that enough. One of my friends had to crash with me during that first night of the May 2020 protests because there was too much tear gas on State Street for them to stay safely in their apartment. Tear gas is difficult to control and can easily harm unintended targets, including bystanders and people in their own homes. This can be true for other less-lethal weapons, as well, which is a driving reason behind Bennett’s push to ban them.

The report also doesn’t detail the adverse health effects of tear gas. Less-lethal doesn’t mean non-lethal or non-harmful. Tear gas is excruciatingly painful for one thing, but during the 2020 protests, it also forced protestors to remove masks and cough everywhere. It was an unnecessary health risk during a pre-vaccine pandemic with primarily respiratory effects and spread. The safety of our community clearly was not considered.

Ask anyone who has been tear gassed what it’s like and prepare for horror stories. They know exactly why it should be banned. Bennett experienced it firsthand, hence her proposal.

And yet, MPD Chief Shon Barnes claims, “Outright bans cut out an important and less lethal way of controlling crowds and violent situations… We are opposed to removing any option that would move us closer to physical force.”

I read this as: if we can’t use chemical weapons on you, we’re gonna use guns, batons, etc. instead. This is a false dichotomy. Public safety should not necessitate force.

In 2021, the MPD received two federal grants totaling over $250,000 to fund de-escalation and violence prevention initiatives. The first grant of $125,000 funded a pilot program with RISE Wisconsin to prevent crime and recidivism for at-risk youth. The second grant of $126,420 was put toward “continued” de-escalation training for officers and upgrading training equipment. The equipment in question? Virtual reality technology. MPD is investing substantial funds into what they consider de-escalation—more than actual community support initiatives—but claims tear gas is still a necessary tool in its arsenal. MPD can put expensive VR goggles on cops, but can’t come up with a better tear gas alternative. If MPD is committed to de-escalation, proving tension can be resolved without tear gas should be a high priority.

In the words of former Madison police chief David Couper, “If you start using tear gas or pepper spray, you’ve pretty well lost things.” I agree. There’s a remarkable energy shift in a protesting crowd when armed cops in riot gear show up. The threat or use of force—regardless of how potentially lethal it may be—can only escalate tension.

Similarly, Bennett noted the use of tear gas during the 2020 protests “…just [incited] more distrust of police and, at the end of the day, wasn’t an effective way of crowd control because we were still out there protesting.”

Tear gas escalates tension, harms protestors and bystanders alike, and isn’t even effective crowd control. There’s no reason to use it.

A better alternative to tear gas is addressing the material conditions that cause protesting, crime, and/or violence. If there aren’t systemic issues to protest and people are actually getting their needs met, voila, no more protesting and no excuse for using any kind of force on civilians. Less-lethal weapons and the police in general are not a cure for civil unrest. We need to invest in and transition into long term solutions that actually benefit our community.

Paige Fernandez, Policing Policy Advisor for the ACLU, suggests “By shrinking [police departments’] massive budgets, we can help end decades of racially driven social control and oppression as well as address social problems at their root instead of investing in an institution that further oppresses and terrorizes communities.”

I don’t want my tax dollars wasted on tear gas and other less-lethal weapons when they could be spent on social programs that provide food, housing, healthcare, education, etc. to community members in need. Other Madison residents agree—the city’s budget does not represent the needs of our community.

In 2020, Freedom Inc. asked Madison community members “What would make your community a great place to live?” and how they would allocate to an ideal city budget. According to the survey results published in 2021, “…Madisonians regularly chose housing, jobs, healthcare, and schools as the things that would most improve their lives. The infrastructure of policing and punishment through jails and law enforcement were overwhelmingly chosen as the least important parts of a safe community.”

To sum it all up, opponents of the ban believe tear gas isn’t a big deal, because that’s how a biased police force has presented the issue. Considering the Supreme Court’s recent overturning of Roe v. Wade and more potential future attacks on reproductive freedom and the LGBTQIA+ community (and probably interracial marriages too if Clarence Thomas wasn’t in one himself), it’s going to be more important than ever for us to be able to protest safely. If you care about these issues, you should consider how MPD’s use of force harms and silences the people who are most affected by them. If you love your community, fight for it.

I support this ban and hope no one ever gets tear gassed in our city again. I wouldn’t wish it upon my worst enemies, much less my neighbors.