Discourse Coffee is opening its cafe in downtown Milwaukee on Sunday 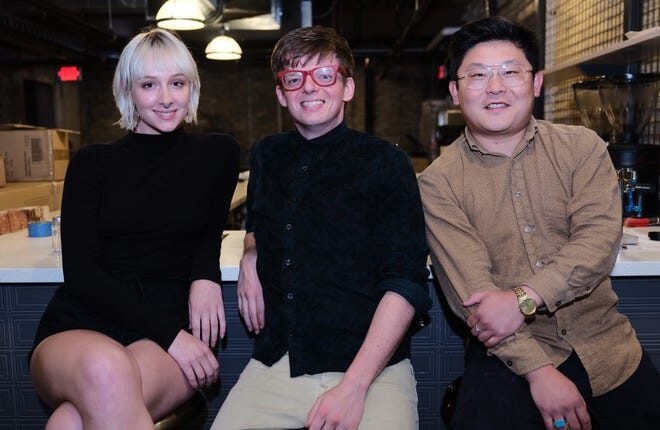 The modernist cafe Discourse is opening its third location, and the downtown spot will be its flagship cafe: besides a food menu and a stronger focus on seasonality and reduced waste, the new place will have vinyl records, books and furniture for lounging.

The cafe’s first day open to the public at 1020 N. Broadway is Sunday; regular hours will be 7:30 am to 4:30 pm daily. Hours could change to adapt to customers’ needs, Discourse founder Ryan Castelaz indicated.

“It’s been really amazing to have the space and the team to do the things we’ve wanted to do and explore forever,” he said.

The cafe will have the drinks it’s become known for, including sous vide coffee and creative flavor combinations for hot and cold caffeinated drinks as well as pour-over coffee and espresso drinks such as lattes.

Starting in November, Discourse will change its seasonal drinks menu monthly instead of quarterly. All three locations will serve three new experimental drinks every month instead of having seven or eight drinks for three months.

“It will enable us to dig deeper into what is ‘right now,’ ” Castelaz said.

One drink that Discourse offers in the fall is the Clyde: mango, tamarind, chai concentrate, oat milk, nutmeg and optional espresso.

An item on the food menu that’s new to Discourse at the downtown cafe is called the Bonnie bun, to pair with the Clyde (yes, they are named for the bank robbers). It’s a morning bun of turmeric and cardamom brioche dough rolled with mango-tamarind paste and glazed with Greek yogurt, honey and sumac.

The food menu will be brief to start, Castelaz said — cold items now, hot items to be added in winter.

Discourse also will have yogurt parfaits with layers including yuzu marmalade and blueberry granola.

“The food is interesting and thoughtful and complex. It goes hand in hand with our drinks,” Castelaz said.

Some baked goods will come from Matilda Bakehouse; others, like the Bonnie bun, are made by Discourse’s own bakers, Louis Byers and Frankie Hartmann. House-made baked goods will include goat cheese, dill and chile scones and balsalmic blackberry chocolate scones.

Having a kitchen as well as a coffee bar means discourse will be able to make gains in sustainability and reducing waste, Castelaz said.

For instance, excess steamed milk that won’t fit in a latte or cappuccino will be chilled instead of discarded, so the kitchen staff can make ricotta.

“All ricotta is twice-cooked milk. We’re just doing it once on a steam wand,” Castelaz said.

Castelaz started Discourse in Sister Bay in Door County in 2017. In 2021, he moved Discourse to Milwaukee, first operating it as a pop-up around the city and then settling in at Crossroads Collective food hall on the east side in February.

Discourse started a summer residency at the Milwaukee Art Museum in April, serving from the lakefront museum’s restaurant. Discourse’s stay there now is extended through Dec. 31. Hours for the Discourse museum cafe are 10 am to 4:30 pm Wednesday and Friday to Sunday; Thursdays, it’s open until 7:30 pm

The new location downtown is in the renovated building that houses Direct Supply’s Innovation and Technology Center. Owned by an arm of the Milwaukee School of Engineering, the structure was built from 1890 to 1892 for the German-English Academy, according to state historical records.

Discourse’s 1,600-square-foot space in the building on Broadway was always intended to be a cafe open to the public, Castelaz said.

Direct Supply initially approached him to open Discourse there more than three years ago, but the timing wasn’t right, he said; After a couple of other cafes fell through in the meantime, Direct Supply asked again this year, and this time Discourse was ready.

He refers to the new flagship cafe as “Discourse grown up.”

“It’s like the old space,” in Sister Bay, “but in every way better,” he said. “When I did Discourse the first time, I was 22 and broke and knew nothing.” To outfit his first cafe, he turned to thrift stores or Amazon.

“This space is just really, really grown up. This is what 23-year-old Ryan wanted to build but couldn’t.”

With Direct Supply having renovated the bones of the space, including supplying outlets to charge devices wherever customers might be sitting, Castelaz could focus on the equipment and the decor.

“The vibe is just exactly what I love in a coffee shop,” he said: cozy, where “you just want to nest in and be there all day.” For instance, the space’s bay windows will be outfitted with large pillows, to make a seating nook.

Like the original Door County site, Discourse on Broadway has vinyl records for customers to spin (the amplifier and turntable are vintage) and books to read.

He also calls the new flagship cafe “a space worthy of the caliber of talent we have on the team.” Castelaz, whose partners in Discourse are Olivia Molter and Sean Liu, said Discourse career baristas represent 60 years of experience.

“I honestly am maybe the fifth or sixth best barista on my team,” said Castelaz, whose book “The New Art of Coffee: From Morning Cup to Caffeine Cocktail” is being published by Rizzoli in April.

Related:A sphere that explodes in your mouth is just one of the wild drinks this experimental coffee shop is bringing to Milwaukee

More:A new bar, along with quick-service dining and coffee shop, are coming to a downtown Milwaukee office tower operated by Associated Bank.