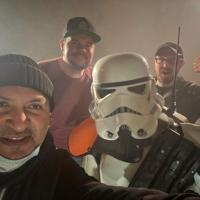 Many people begin personal projects, but few people see them to the end. That was not the case for a local film crew.

Of the 1,000 films submitted to be screened at the SMODCastle Film Festival, run by renowned director Kevin Smith, a team of Kenosha area creatives had its creation — “Behind the Bucket” — selected for the event. The film was screened Dec. 4.

The film team followed the Midwest Garrison for two of those four years and documented the volunteers visiting Gold Star meetings at Star Wars Celebration in Chicago, burn victim camps, and hospitals, to tell the story of the legion’s motto: “Bad Guys Doing Good. “

“At first I thought it was nerds playing dress up,” Determan said. “I was blown away by their stories of charity. The documentary tells a story through the charity of fandoms.”

The documentary was filmed in Wisconsin and Illinois.

“We didn’t know exactly what we would get,” Rosy said. “As we progressed with the film, lots of happy accidents happened with the direction of the story. It was daunting, but I loved it.”

Although the film centers around a Star Wars-themed group, the film crew said the audience does not need to be well versed in the movie series to understand the documentary.

“You don’t have to know or like Star Wars,” Determan said. “It’s not about Star Wars, it’s about the people.”

When it came time to submit the film for festivals, Haight said the group used Film Freeway, a common film submission platform for festivals.

When the crew learned its film was selected, they felt honored.

“Getting the film made and chosen for the festival is an honor,” Ramos said. “You win just by being there. It’s a combination of a lot of people’s work, and you should feel a sense of pride.”

Crew members felt a sense of pride in completing the film in general.

“It feels great that we’re done and to have that sense of accomplishment,” Rosy said. “Very few people follow through with projects and see completion.”

What’s next for “Behind the Bucket?” The crew said the film will likely be submitted to other festivals.

Determan said the group is also looking for other theaters to screen the film.

“We screened the film at a venue in Illinois,” Determan said. “The proceeds from that went to charity. We want to find and work with venues in Wisconsin where we can do the same thing.”