Drive to ‘build something special’ in her hometown leads Kenosha’s Carly Werwie-Swartz to leave coaching job at Loyola (Ill.) for UW-Parkside | NCAA Division 1 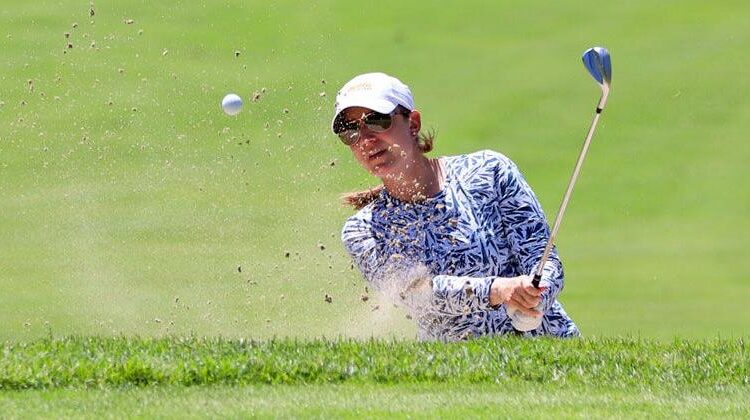 The part of her decision that made it easy to leave an NCAA Division I women’s golf program on the rise for a Division II start-up — and coach a men’s program at the same time — was the amount of road noise in Carly Werwie-Swartz’s life.

It was not uncommon for the former University of Wisconsin golfer to spend 90 minutes each way commuting from her home in Kenosha to the athletic offices at Loyola (Ill.) University, located just off Lake Michigan on Chicago’s far North Side. It wasn’t a problem for Werwie-Swartz to make that drive the last four years while she was taking the Ramblers to new heights, but she knew it would get a little bit more complicated in late October after she and husband AJ became parents for the first time. Then those 90 minutes would feel like an eternity.

The part of her decision to become the director of golf at UW-Parkside, the lone Division II school in Wisconsin that happens to be located 10 minutes from the home in which she grew up, that made it excruciating to leave Loyola? It was the Zoom call she held Thursday morning with Ramblers athletic director Steve Watson, deputy athletic director Holly Strauss-O’Brien and members of the Loyola women’s golf team who are about a month away from opening the 2022-23 season.

“I told my husband (Thursday) evening, that was the hardest meeting I ever had,” Werwie-Swartz said in a telephone interview Friday as her hire at UW-Parkside was announced on the school’s website. “I don’t know how coaches who change jobs frequently do it or move from one team to the next and the next. What made it even more difficult was when I started at Loyola (in 2018), it was a program that had potential , but was just missing a few things to really get it moving in the right direction and on the rise.

“Having the players buy into my philosophy and what we were doing as a program — from our practice schedule to our travel schedule to our team-bonding things we would do — that all made it hard. The golf is a big factor, but also seeing their development as young women.”

In the end, Werwie-Swartz’s decision to make a bold career move ahead of becoming a first-time mom came down to the strength of her roots. In other words, you can take the coach out of Kenosha, but you can’t take Kenosha out of the coach.

“I played at Wisconsin (and) traveled all over the country for those three years (on what is now the Epson Tour) so I have left (Kenosha), but it’s also like I never did leave,” said Werwie, who spent two years as a graduate assistant at Carthage College in Kenosha before landing the Loyola job. “(Parkside) being 10 to 15 minutes from my house is a pretty big difference. Both my family and my husband’s family live in Kenosha and Kenosha’s always been a real special place to me. I feel the opportunity to build something special in my hometown — the men’s team is starting to progress and then being able to add a women’s team — is a real special opportunity.”

Werwie-Swartz replaces Tyler Wollberg, who left in July after three seasons at the school to coach the men’s and women’s teams at Division III St. Lawrence University in Canton, NY Wollberg replaced Mark Olson, who spent 18 years in the position and remains as a volunteer assistant coach and had the program’s indoor practice facility (opened in January of 2021) named in his honor.

During the 2021-22 season, Wollberg coached the Rangers to victories at the MSOE Invitational and The Klash in Kentucky before finishing eighth out of 10 teams at the Great Lakes Intercollegiate Athletic Conference Championship. Parkside, who also shot his best single-round score in 12 years (285) in the final round of the Dan Salisbury Memorial in Springfield, Ill., in April, returns eight golfers from that team this fall, led by seniors Matt Unger of DeForst and twin brothers Steven and Danny Sanicki of Menomonee Falls.

The progress was similar to what Werwie-Swartz saw in her Loyola program last season.

“We’re thrilled to have Carly on board,” Parkside athletic director Andrew Gavin said, correcting his initial description of the hire from “home run” to “hole-in-one” by the end of a telephone interview. “She’s just the total package in a candidate you’d want to hire as a head coach. She competed, well, she still competes, at a high level as a college student-athlete and as a pro afterwards. She has coached at various levels, but certainly at a high level at Loyola, recruiting with scholarships.

“Obviously, her ties not only here in Kenosha but beyond throughout the state of Wisconsin and throughout our region, where we recruit most of our student-athletes from, Carly is a well-known name in the golf world. She’ll be able to hit the ground running, sustaining the men’s success — and building on what Coach Wollberg and Coach Olson have done with that program — and launching our women’s golf program.”

Gavin said adding a women’s golf program became a goal of his after arriving at Parkside five years ago this month. Division II schools are allowed 5.4 scholarship equivalents for its women’s golf programs and 3.6 for its men’s team. With the addition of women’s golf, Gavin said scholarship numbers for the two programs are still being finalized but he expects Werwie to be able to offer “between 3 and 3.5” for each team once the women’s program goes live at the start of the 2023- 24 school year.

“College and college athletics departments are places of opportunity and (women’s golf) is not an opportunity we’ve been providing, historically, here at Parkside,” Gavin said. “Creating that opportunity for talented young women to come to Parkside and potentially get some athletic scholarship money to help pay for college and play at a high level is exciting to have that now. As we celebrate the 50th anniversary of Title IX, we want to provide those experiences for young girls and young boys (coming out of high school).

“Beyond that, golf matters in Wisconsin. It’s a sport that a lot of people love in this state.”

No one more so than Werwie-Swartz, who is still fiercely competitive as a golfer, as evidenced by her T-3 finish at the Wisconsin State Women’s Open in June where she competed despite being five months pregnant. While her drive to get to work will be significantly shorter when she officially begins her new position Aug. 15, the drive once she gets there will be as strong as ever.

“I’m definitely excited,” Werwie-Swartz said. “It’s a unique transition period right now with making sure that the women’s team at Loyola is set up for a smooth transition and everything is still being planned out as if I’m still running it for the fall. Between our administration and our men’s coach (Erik Hoops), I feel real confident that there will be a smooth transition.

“There is a great support system not only in the staff, but also from the athletic training and sport performance staff, there are a lot of really great resources from them. And if there are questions they need answered, it’s like I told them, it’s not like the door is shut. I want them to still achieve all the success and I absolutely will still be cheering for them because there are a lot of great, young women on that team and seeing them succeed is great.

“You want the start date for Parkside, but then you’re like ‘Oh, that’s the end date for Loyola.’ I know when it happens, it’ll be like ‘Oh, wow, what a crazy week going from one program to the other.’ I know I’m not the first coach to go through that transition… It’s unique with the timing and I do think it will work out for us.But it will be fun to sort of put my mark on a program and build what I think can be strong men’s and women’s programs (at Parkside).”