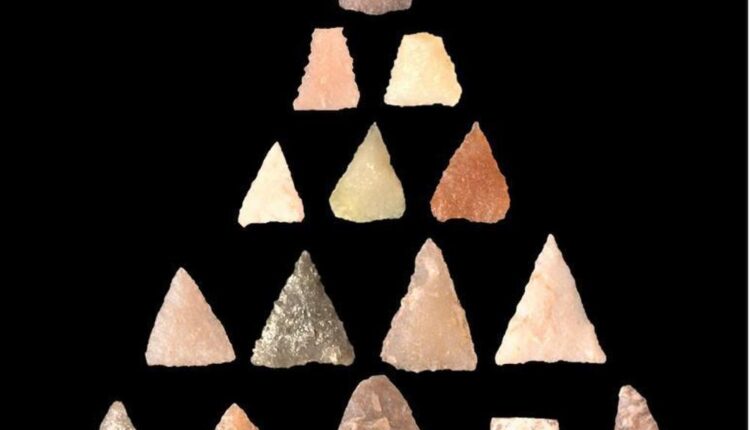 Small stone arrow heads, known to archaeologists as “Madison Triangular Points,” and frequently referred to as “bird points” by artifact collectors, are common at Fort McCoy archaeological sites and throughout the Midwest.

Edward G. Scully initially named this point type as Mississippi Triangular, but later changed its name to Madison Triangular in 1951 after Madison County, Ill., where these arrowheads were first identified by archaeologists.

These arrowheads first appear in the archaeological record about 1,200 years ago (AD 800) during the Late Woodland cultural time period and were the main hunting weapon used by Native Americans in the Fort McCoy, Wis., area until 300 years ago, although use did continue in some areas beyond the introduction of European goods during the European Contact period (ca. AD 1650-1700).

The use of Madison Triangular points signifies the transition from spear points to “true arrowheads” and the introduction of the bow and arrow to the Fort McCoy area during the Late Woodland period.

Madison Triangular points are described as small, unnotched triangular points. They are generally 1-2.4 inches long and 0.6-1.2 inches wide. The blade edges and base tend to be straight but may be slightly concave (curves inward) or convex (curves outward). The blade edges may have serrations present, but there are many debates as to whether serrations have a functional or symbolic purpose.

It’s known from experimental studies that they were likely designed to detach within the wound, making them expendable, while the arrow shaft which took a long time to produce was retrieved and retipped.
Madison Triangular points were in use for at least 800 years and span multiple cultural time periods (Late Woodland, Mississippian (AD 900-1100), Oneota (AD 1200-1650), and European Contact), which makes dating a site to one specific time period difficult if only these stone arrowheads are present.

If Native American pottery is recovered from the site with Madison Triangular points, it might be possible to refine the date because pottery production methods changed over time and the presence of European trade goods also serves as a post AD 1650 time marker.

It has also been observed that late Oneota points in the La Crosse area are generally larger. Size differences have been noted within Oneota sites in Iowa where long and narrow triangular points are associated with burials while short and wide triangular points are recovered from village settings.

Another hypothesis to explain the difference in point sizes is that some of the shorter points might have something to do with re-use and re-sharpening, and that the longer points might have been the template.
Although these observations are not definitive for dating the specific time period of its use, they are a starting point.

More data needs to be collected to determine if there is a way to differentiate which time period a serrated Madison Triangular point belongs to and whether or not serrations have a functional or symbolic purpose.

The use of bow and arrow hunting technology was so simple and effective that it’s no surprise that its use continued despite socio-cultural changes among many pre-contact Native American peoples.

So, most of the time Madison Triangular points, when found, are broadly categorized as Late Woodland/Oneota (c. AD 800-AD 1650) in age due to a lack of other data to refine the date.

All archaeological work conducted at Fort McCoy was sponsored by the Directorate of Public Works Environmental Division Natural Resources Branch.