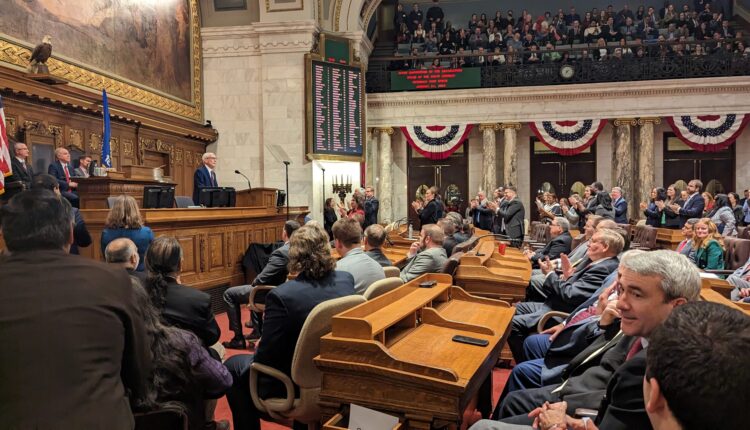 Democratic Gov. Tony Evers pitched his vision for Wisconsin’s next biennial budget — including proposals for how to spend the state’s $6.6 billion budget surplus — during the first State of the State address of his second term with Democratic lawmakers jumping to their feet repeatedly to applaud, while Republicans remained seated.

Evers laid out an expansive list of budget proposals Tuesday night to the Republican-led Legislature, with whom he’ll need to work in order to succeed in passing any of the policies. Evers emphasized the importance of finding compromise on certain issues, while proposing investments in public education, child care, the mental health crisis, environmental issues and the economy.

“[The surplus] means we can continue our progress making the wise investments we’ve long needed to — and not because anyone wants to make government bigger — but because Wisconsinites want a government that works, and works better,” Evers said during the address.

Evers announced a plan to address local communities’ funding shortages by changing Wisconsin’s shared revenue system, suggesting he is supportive of an idea publicly supported by Republicans. He said he would include a budget provision that would divert as much as a total of 20% of the state’s sales tax to shared revenue to help fund local governments.

“As we keep working together on a plan, let’s find common ground,” Evers said from the podium in the Assembly chamber.

Evers said the plan would direct more than $500 million each year for communities to invest in emergency medical services, fire and law enforcement services, transportation, local health and human services. He added that the plan would ensure communities would see growth in shared revenue in the future after years of the state not keeping up with the needs of counties, cities, villages and towns in Wisconsin.

Assembly Speaker Robin Vos previously said he was considering a plan that would replace the shared revenue system with 1% of the state sales tax. The idea, according to Vos, is that as revenue from the sales tax grows it could be shared with local governments.

“Spending billions on a flat tax isn’t a workforce plan or an economic development plan. We need to bolster the middle class; we need to maintain our economy’s momentum; and we need to reduce barriers to work and recruit and retain talent to address our state’s workforce challenges.”

Senate Majority Leader Devin LeMahieu and Vos have both said they support implementing a flat income tax system, as opposed to the current progressive tax system, which increases residents’ tax rate as their income rises.

A proposal introduced by LeMahieu would transition Wisconsin to a 3.25% flat income tax. The highest earners in Wisconsin would save the most from the plan as their tax rates — currently 7.65% — would be cut by over half. Once fully implemented, the tax cut would cost the state around $5 billion in revenue every year.

“When we deliver tax relief — and we will deliver tax relief — we’re going to do it responsibly by ensuring we can keep taxes low now and into the future,” Evers said. “And we’ll do it without driving our state into debt or causing devastating cuts to priorities like public schools and public safety.”

After the address, LeMahieu said it’s important to have historic tax reform in Wisconsin, and that neighbors like Illinois and Michigan have a flat tax, making them more attractive than Wisconsin to potential workers and employers.

“We must continue to lift up our working and middle class by enacting sustainable, targeted tax relief, investing in good-paying quality jobs, and ensuring that our communities have the necessary resources to lift up ordinary Wisconsinites, that is exactly what Wisconsin Democrats intend to do over the next four years,” Agard said in a statement. “It’s time to put the economic needs of ordinary Wisconsinites first, from birth through retirement.

During the address, Evers promised to follow through on his commitment to use a portion of the $6.6 billion budget surplus to invest in Wisconsin’s children and public education system.

Evers said Wisconsin’s current school funding system is unsustainable, pointing to the large number of communities that have increased their taxes through referendum in order to fund schools and local governments.

“While some school districts have successfully passed referenda to help keep the school lights on, many have tried and failed. This system means drastic differences in outcomes for our kids — creating winners and losers, haves and have-nots,” Evers said.

Evers plans to use funds to help improve Wisconsin’s reading and literacy outcomes and expand financial literacy curriculum by devoting $20 million. He also wants to invest $20 million in recruiting, developing and retaining teachers and student teachers.

Evers also committed to addressing the “quiet, burgeoning” mental health crisis in Wisconsin and declared 2023 the “Year of Mental Health.” He said he plans to dedicate $500 million to expanding mental health resources, including $270 million to develop a permanent program to help with school-based mental health services. 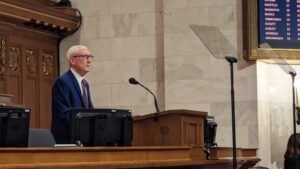 Environmental issues were also a key priority as Evers’ proposed investing $100 million for  addressing pollution in Wisconsin’s water from “forever chemicals” called PFAS. The money would go towards testing, sampling, and monitoring statewide.

“Partisan politics cannot keep getting in the way of this work while Wisconsinites worry about the water coming from their tap,” Evers said. “Clean water must be a top priority for us, from PFAS to lead to nitrates, folks — and it will be in my executive budget I’ll announce next month.”

Vos said Evers is proposing “throwing a bunch of money at the problem” and said he wouldn’t support anything that would grow the size of the government.

“Pretty much everything he proposed today was a government expansion,” Vos told reporters. “So I would assume that most of those are DOA.”

Evers will present his full budget proposal to the GOP-led Legislature next month. Then, the Legislature will spend the following months writing its own version of the budget. Vos said it’s likely Evers’ whole budget will get thrown out.

“All of Gov. Evers’ ideas will probably be tossed aside, like we always do and we’ll start over,” Vos said. “If he has creative ideas, he should probably reach out and talk to us about it because that’s the way that we’re going to find some kind of consensus.”