Examining the power of Latino voters 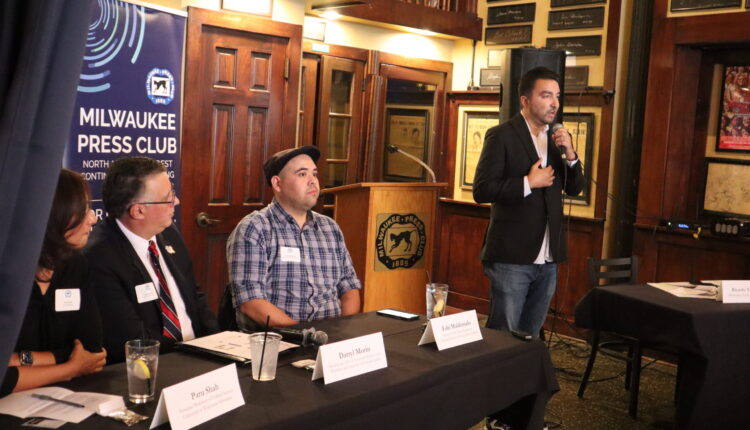 The power Latino voters could demonstrate in the Nov. 8 midterm elections was the  topic of a panel discussion at a Milwaukee Press Club on Wednesday. But the subject is a complex. Increasing economic prosperity, immigration reform and access to education are issues that  continue to motivate Latino communities in Milwaukee. Yet there’s also what some panelists called “the myth of the monolithic Latino voter.” A reductionist idea that casts one of the city’s most influential voting blocks in a one dimensional light.

For panelist Paru Shah, an associate professor of political science at UW-Milwaukee, the complexity of Latino voters was showcased in 2020. “I think that what we’re seeing this year nationwide, including in Milwaukee, is that there are a lot of issues that are not party-specific,” said Shah. “Talking about immigration, the economy, education … there’s going to be a lot of looking at specific candidates and seeing what they’re saying. Like what are candidates here in Milwaukee talking about in terms of the economy? What are they saying about jobs and inflation?”

The labor of Latino and immigrant families is crucial to many industries in Wisconsin. Many issues that motivate Latino and immigrant voters are ultimately connected to work and the economy. These include  raising wages in Wisconsin, where the hourly minimum wage rests at $7.25, and restoring drivers’ licenses to undocumented residents so they may travel easily and safely to work or the store.

Yet, another issue that Latino voters face is being treated as if they were all the same. “Latinos get pushed into one big category,” said panelist Fabi Maldonado, a Racine County board supervisor and political director of Voces de la Frontera Action. While doing neighborhood outreach, Maldonado and others at Voces de la Frontera Action hear a set of recurring themes come up: “Education, health care and the economy,” he said, in addition to immigration reform, and addressing asylum. Another concern coming up more and more, however, is the rise of political extremism.

“Every time we have an election cycle, we start to get more calls from victims of hate crimes,” said panelist Darryl Morin, president & CEO of Advanced Wireless Inc. and chairman of Forward Latino. “And that’s because of extremist rhetoric that people are using trying to get their constituents to go out and vote. So, if there’s one call I want to put out to elected officials, it is to be very careful with your words.” Latino and immigrant families have long been used as political scapegoats.

Former President Donald Trump got elected on a platform that demonized Latino immigrants. Trump campaigned on building a wall across the southern border, and referred to migrants and Mexican immigrants  as criminals, rapists, and gang members. Again, during the 2022 election cycle, political ads describing immigrants as an invading force are commonplace.

It’s something that Morin condemns. “When you say there are open borders, allowing all these criminals and drug dealers to come into the country, people who have a difficult grasp on reality will take that in a literal sense, and will act on it. And they don’t stop to ask a person with a Hispanic sounding last name or with Hispanic physical characteristics, ‘Well what’s your immigration status?’”

One incident Morin is aware of involved a Latino individual who was a U.S. citizen, but was told to go back to his country and stop invading. “And he had acid thrown in his face, right here in Milwaukee,” said Morin. “We’ve had numerous calls and this election cycle we knew it would happen again. It’s continuing to happen.”

Racist incidents targeting minority communities or citizens have been on the rise in Wisconsin over the last two years, in Waukesha, Wauwatosa, West Allis, Greendale, Pleasant Prairie and Kenosha. Morin noted that many Latinos who experience these attacks keep it to themselves. “Most of these folks you won’t hear about,” he said during the luncheon, “because they’re terrified that either that person who did it, or their families, or associates, will go back to finish the job.”

Nevertheless, Latino voters aren’t ramping down their participation. In fact, Morin has seen turnout rates for Latinos increase. “Wisconsin actually leads the nation in many ways in regards to the turnout,” said Morin. “In the last national election, more than 50% of Latinos turned out to vote. And that was very, very exciting for us because traditionally we’ve had very low rates. We’re expecting this election, once again, to probably have 70%-plus of eligible Latino voters to come out.” Morin said, however, “it means nothing to be the largest demographic vote if you’re not the largest demographic group that goes out and votes. To have your voice heard, you have to vote.” 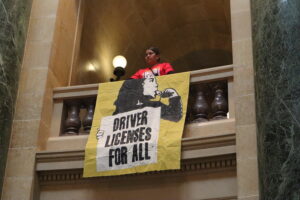 Voces de la Frontera and allied organizations hold a lobby day at the Capitol. This was part of a two day call to action. (Photo | Isiah Holmes)

Shah stressed that, “I think it would be a mistake, I think as both parties have learned, to assume that there are voter blocs that you can just ignore, and that they will vote for you no matter what.” She added, “people know now that their vote matters.” Shah said Latino voters played a pivotal role in President Joe Biden’s victory in Milwaukee against Trump. “So if that’s the case, then waiting until this year to have a Latino kind of voter outreach person seems to be, like, not a great idea.” 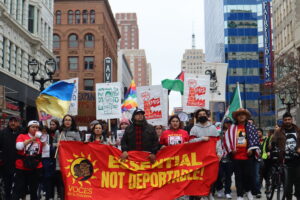 Over 4,000 people gather for the Voces de la Frontera march for immigrant rights on May Day, 2022. This was part of a two-day action. (Photo | Isiah Holmes)

People are also fatigued, however. Especially those who have been out in the streets for years, yet reforms including  like immigration reform remain elusive. There’s additional anxiety that some voters may not vote Democratic again since certain policies which were campaign cornerstones have yet to pass. Others are turned off by the Republican Party and much of the rhetoric in recent political advertisements, as well as  the Trump legacy. Maldonado said he regularly hears people say, “It’s like one party is actively against us, and the other one is fumbling the ball. People are demoralized.”

Young voters are often an overlooked voting bloc. Professor Shah noted that while Latino voting numbers have increased, many of those may be young voters. “I would say both parties have done a poor job of really reaching that age group,” she said, particularly voters who are 18-24 years old. Yet, these are often the age groups who drive street-level political activism and are motivated by issues like health care, increasing wages and more recently, reproductive rights. Hard-to-reach voting blocs are even more obscured due to databases which both parties use to drive which neighborhoods and doors they should knock on for the greatest result.

Abortion is an issue which may split Latino voters. Still, among Latinas, the elimination of reproductive health procedures wasn’t popular. Misinformation and combating misinformation is also something on the minds of many voters. Especially those who find themselves on the receiving end of some of that rhetoric. Ultimately the panelists were optimistic about what turnout for Latino voters may be in November. Despite midterms traditionally having less turnout, there’s a sense throughout communities that a lot is on the line.