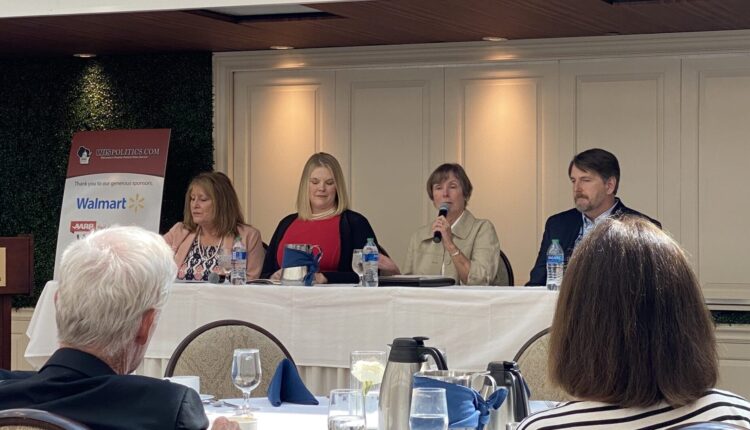 Four experts in Wisconsin election administration discussed the current state of Wisconsin’s elections as they plan for the November election in the face of proposed changes to the law, conspiracy theories and unprecedented interest in the inner workings of the state’s voting system.

The four experts agreed that the best way election administrators in Wisconsin can combat misinformation about the state’s election processes is to keep trying to share accurate facts about elections and the checks and balances in place to prevent wrongdoing.

“I will talk to people that are in support of us and I will talk to people that are just vehemently against us and what we do as election administrators because I want to make sure people have access to good information about elections,” Wolfe said. “I think here in the state of Wisconsin we’re so lucky because we have 1,850 [clerks] … in every single community in Wisconsin, you have an election expert, you have a clerk, even in the smallest township in the state of Wisconsin. So just continuing to encourage people to engage with those folks, to seek out those opportunities to learn the facts about elections.”

But, the panelists said that being dedicated to the work of making sure accurate information about the election system is disseminated can be frustrating in the face of ceaseless conspiracy theories and allegations that county and municipal clerks, and the staff of the WEC, are secretly putting  their thumbs on the scale and creating fraudulent results.

“That’s been the definition of the last couple years, is the misinformation,” McDonell said. “The frustrating thing is we’ve been trying to do a lot of voter education and [Wolfe] mentioned how hard it is to keep up with it. The other problem is that they’re not listening to the same channels you’re broadcasting on, and if they actually heard it they wouldn’t believe it because they’ve been told ‘that’s fake news.’ That is probably the hardest thing because often I’ll show people, here’s how that can’t happen, but I feel like I’m talking to one grain of sand on a beach that’s miles long.”

Bernier, a former county clerk and one of the few Republicans in the Legislature who has stood up against conspiracy theories of fraud in the 2020 presidential election, said she’s been working hard, but often fruitlessly, to educate the conservative voters in her Chippewa County district.

“You cannot do anything with ‘I don’t believe you,’” Bernier said of her conversations with voters. “I keep at it, explaining the system and where the checks and balances are. So I just want to pull my hair out, and it’s probably why I’ve made a lot of national news, because I wanted to speak the truth and go against some of the things the Republicans have been saying.”

At one point, the panelists were asked if any of them had faced threats for trying to counter conspiracy theories about the election. Only McDonell raised his hand, but while he was answering, Bernier put her arm around Wolfe and said, “Yes you have.” McDonell said there’s often little that can be done because the legal bar for a threat to be prosecutable is high.

“There’s two kinds of threats, the ‘I hope you die’ threat, — those aren’t the problem really,” McDonell said. “There are more specific threats. The hard ones are like, ‘You committed sedition, you should die, you should watch out.’ You tell law enforcement about those, it’s frustrating for clerks because what do you say? It’s like a game of Clue, do they have to tell you it’s going to be in the billiards room with a wrench at 4 p.m.? But the more serious threats seem to be launched against the elections commission, and [Wolfe] and the Milwaukee and Madison clerks.”

The panel also discussed specific questions about changes to election laws and actions in the court system over how the laws should be interpreted. Specifically, they talked about the practice of correcting address errors made by absentee ballot witnesses, absentee ballot drop boxes and assistance for voters with disabilities.

Bernier, the outgoing chair of the Senate elections committee, said a number of bills were passed during the most recent legislative session that would have cleaned up a number of concerns — including defining more specifically what counts as an address on the absentee ballot certificates and allowing local clerks to begin counting absentee ballots prior to polls closing at 8 p.m. on Election Day — but that Democratic Gov. Tony Evers had vetoed the measures.

“The governor didn’t sign it,” Bernier said. “We had a bill that said if the zip [code] was missing, [an absentee ballot] couldn’t be accepted. So I think the Legislature will pass the bill again.”

McDonell said he agrees that  there were a number of good ideas within the package of elections bills passed by Republicans, but that the problem is the good ideas were coupled with measures that Democrats viewed as disenfranchising.

“I would like a law that just said that, that was two sentences long, and you do 20 of them,” he said. “What happens is they get bundled together and then the whole bill goes out. Decouple everything, pass the election bills and we’ll get something through.”

With just eight weeks before the 2022 midterm elections, the future of the state’s current election system is at stake. Several Republicans running for statewide office have included in their platforms promises to disband the WEC and move the responsibility of running elections to the secretary of state’s office. Despite these plans, the panelists defended the current system — even if they agreed it could use some tweaks and improvements.

“I certainly won’t take an opinion on what the legislative process may yield in terms of changes to the election administrative system, but what I will point out is there are so many checks on our system, so many things that have to go a particular way in order for an election to be certified,” Wolfe said. “A lot of times there’s this tendency to feel like the sky is falling … that thing happened so everything is falling apart. I’m going to stay on the side of optimism here and say there are so many people with integrity that are involved in elections, that I feel confident we’re going to be okay.”