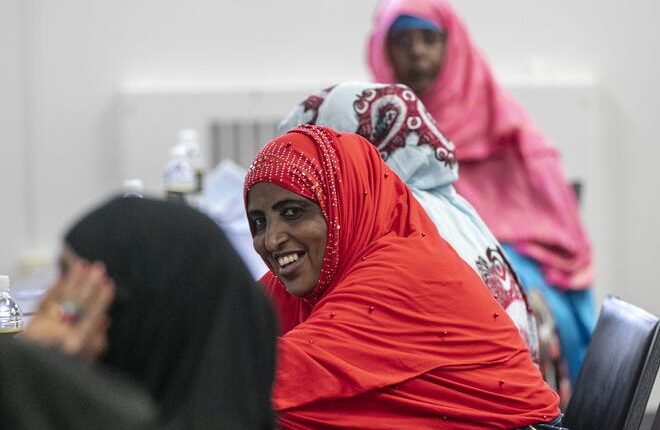 With the majority of the state considering a child care desert, many families struggled to find regulated care for their children. But for Somali immigrants and refugees, culturally appropriate care in the Green Bay area doesn’t exist.

This means over 300 Somali families living in Green Bay — and about 1,500 young children — are left without regulated child care that meets their cultural and language needs, such as serving food permitted by Islam.

For years, Community Services Agency Inc., a nonprofit that works with Somali immigrant and refugee populations, has been brainstorming ways to fill this gap with Family and Child Care Resources of Northeast Wisconsin.

Now, they’re seeing the first step in the process come to fruition. Each Sunday, 27 Somali women meet above the FCRNEW office for three hours, taking a translated version of an entry-level class that’s part of the requirements to work with young children in a child care setting. It’s free for the women.

“We’re able to bring as many Somali mothers together as possible to teach them how to take care of children in their homes or maybe they’ll open a center together. I don’t know what the final shape would be,” said Adan Hurre, a community health navigator with Bellin Health who works with COMSA clients.

The class is phase one of the Culturally Responsive Child Care Partnership, a joint venture of the Brown County United Way, COMSA and FCRNEW to increase the number of culturally appropriate child care options in the county.

Brown County United Way has committed $50,000 to the Partnership. Part of it covers the cost of one of the class trainers, as well as other costs including translation services and the child care FCRNEW staff provides while the women are in class. The funding also will help establish a support network through FCRNEW for unregulated providers, some who are culturally diverse, to help them along the path to regulation.

“With child care in particular, these needs have been persistent for years, but due to the pandemic and other factors going on in our country, our state and our nation right now, those needs are exacerbated,” said Sarah Inman, Brown County United Way vice president of community investment.

MORE: Child care providers struggling with food costs and inflation got some federal help. Is it enough to stem rising costs of care?

MORE: Children under 5 can now be vaccinated against COVID. Here’s what it means to Wisconsin’s child care and early education providers

“We can’t address every need all at once, (so we consider) ‘What are those needs that help individuals and households thrive rather than just survive?’ In this case, it’s making sure children are cared for in a high-quality environment that’s best suited to what the family is looking for.”

The pilot of the partnership is considered a huge success. All 27 class slots have been filled and more women are on a waitlist. It far exceeds the interest in the other entry-level classes FCRNEW leads.

“When we first started this, COMSA said, ‘I think we could get five to eight women to take this class,” said Jamie Tramte Brassfield, FCRNEW early childhood manager. “Then we got it going and we set up a date and time, and the week before, they said, ‘We have 20 women signed up.’ So I was expecting people to come, but I wasn’t expecting 27 women to come.”

There are several hallmarks of culturally appropriate child care that Green Bay providers are missing, local advocates say. Without Somali staff, it can be hard for parents to communicate with child care providers. It also can be a struggle for children new to the US who don’t yet know English.

Because Somali people practice Islam, they can only eat Halal meat, or that slaughtered according to Islamic law. The religion also prohibits eating pork.

“If you are a Somali parent, you want to leave your child with someone that you trust,” Hurre said. “Not only are you worried about what they eat, but what environment are they in? Is there a disparity between how your child is treated and how the other children are treated? If they’re infants, are they getting the services they need, like diapers being changed on time? So the parents are concerned that the center they’re sending their children to is responsive to their needs, and then they also have to serve the food they need.”

Because these needs are often not met at child care centers, Somali families often rely on each other so they can work and make a living. Hurre explained that, for families who come to the US together, parents often choose to work shifts opposite of each other. It might not be ideal for family time, but it guarantees an adult will always be with the children.

When only one parent immigrates to the US, often older siblings assume the role of caregivers. Hurre recalled hearing from a mother who had no other choice but to rely on her eldest son.

“He’s a young boy. He wants to go be with his friends. He wants to play sports,” Hurre said. “He doesn’t want to be child care for his siblings, but he doesn’t have a choice so he has to do it.”

But for an increasing number of Somali families, relying on family isn’t always possible. This causes them to move to areas with Somali-run centers, most commonly Minnesota.

It’s a lost opportunity for Green Bay in a variety of ways, according to Said Hassan, COMSA program support director.

“If refugees come and get child care, they’ll work for companies, pay their taxes, pay their rent, so it will be good for the city because they’ll contribute to its economy,” he said.

“Those kids are the future of Wisconsin employment, and those children we’re not going to get back,” he said. “So, we’re losing a lot of potential employees when Somali families are moving out of the state because they’re not receiving the services that they need to survive. I think the quality of life is better here, but they have a lot of child care services that we can’t find here.”

That’s why Kosar Hassan, who worked at a Somali-owned day care when she lived in Minnesota, is taking the class and wants to become a regulated child care provider in Wisconsin.

“If we open a daycare here, maybe they’ll stay,” she said. “As long as the owner is Somali, they’ll bring them.”

Farhia Ahmed, another student in the class, is hoping not only to meet the needs of the Somali population in opening her own daycare, but also those of manufacturing workers.

She said that when working as a manufacturing supervisor, employees frequently came to work late or not at all because daycares weren’t open during their nontraditional shift times.

“I would open a place that keeps their kids safe and opens early enough,” Ahmed said.

Not all the women in the class are taking it in hopes of starting a business, though. Kadra Nimale, who also worked at a child care center in Minnesota, is taking the class so she can first volunteer at daycares in Wisconsin and eventually be hired by one.

FCRNEW and COMSA are evaluating the next steps they’ll take after this weekend’s final class session. If they offer the next classes the first cohort of Somali students needs to become regulated providers, the costs will continue to be funded through the partnership, Tramte Brassfield said.

Said Hassan said the current cohort of Somali women has shown interest in continuing down the path of becoming regulated providers.

“All of them were saying, ‘When I finish this class, I want to continue with the other classes,'” he said.

The partners also are also learning how to address the long wait lists of Somali women not in the current class.

In the future, Inman said the Partnership hopes to expand to ensure other diverse populations in Brown County can find culturally appropriate care.

Madison Lammert is a Report for America corps member who covers child care and early education in Wisconsin at The Post-Crescent. Contact her at [email protected] or 920-993-7108. Follow on Twitter @MadisonLammert0.

You can directly support her work with a tax-deductible donation online at http://bit.ly/Appleton_RFA or by check made out to The GroundTruth Project with subject line Report for America Post Crescent Campaign. Address: The GroundTruth Project, Lockbox Services, 9450 SW Gemini Dr, PMB 46837, Beaverton, Oregon 97008-7105.

Newborns Get Routine Heel Blood Tests, but Should States Keep Those Samples?