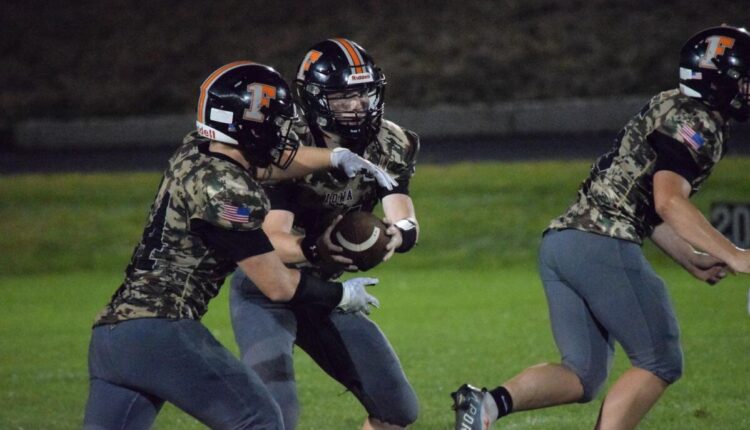 FAIRFIELD — Fairfield football had its chances to pick up a win over Fort Madison on Thursday night, but a turnover and field goal by the Bloodhounds in the final minute propelled Fort Madison to victory 16-13.

The loss marks the second straight for the Trojans, who fell the week before in a comeback victory by Ottumwa.

Friday nights game was started just how the Trojans planned it as thier first drive of the game ended with six points and the lead.

As Fairfield marched down the field, quarterback Tate Allen and tight end Max Weaton were clicking on all cylinders.

Fairfield’s Max Weaton celebrates with Terrance Craig after Craig made a tackle for a loss against Fort Madison on Friday, Sept. 9, 2022. (Hunter Moeller/The Union)

Allen found Weaton a total of three times on the drive, with the third completion ending in third and inches.

On the next play, the Trojans fumbled for a two-yard loss, making it fourth and two.

They lined up in punt formation, with Weaton taking the kick, but instead of booting the ball downfield Weaton slung the ball to Allen down the right sideline for a 17 yard gain and a new set of downs.

One play later, Allen hit running back Miles McEntee for a 23 yard touchdown and the first score of the game. After the extra point, Fairfield took a 7-0 lead.

That would be the Trojans final time touching the end zone until the final quarter of play.

Fairfield did well holding the Bloodhounds on their first drive of the game, causing a turnover on downs, but the Trojan offense couldn’t find a way to score.

Fairfield’s Tate Allen looks for a pass downfield on Friday, Sept. 9, 2022 against Fort Madison. The Trojans lost in the matchup 16-13. (Hunter Moeller/The Union)

On their second drive of the game, Fairfield converted two first downs, which included a 20 yard deficit, but the Trojans ended up having to try for a field goal that was ultimately blocked.

Fort Madison took the momentum down the field and capped off the drive with a touchdown through the air with Aidan Boyer finding Nathaniel Swigart. With the extra point through the upright, it was all knotted up 7-7.

Fairfield had a chance to put a halt on the drive with a fourth and eight, but the Bloodhounds converted.

The score would be the final of the first half as the Trojans were forced to punt and the Bloodhounds were halted as time expired.

The Trojans stunted the Bloodhounds out of the locker room, forcing them to punt.

On the ensuing drive, Fairfield marched the ball down to the Fort Madison 22 yard line after a pair of McEntee rushes, but Allen was picked off at the five yard line giving the ball back to the Bloodhounds.

“McEntee really ran hard coming into the second half,” Fairfield head coach Nate Weaton said. “We were getting a good push up front. We had a guy end up down field that wasn’t supposed to be. That kills momentum.”

Neither team would score in the third quarter as the next three drives ended with punts.

To start the fourth quarter, Fairfield had the ball at third and nine.

The Trojans would get the score they needed.

Allen was able find Tate Richardson for a 24 yard gain, which set up a pass to Weaton for an 11 yard touchdown. The Trojans missed the extra point making it 13-7.

Fort Madison wasted no time to answer back as the Bloodhound’s Kane Williams returned the kickoff for 52 yards all the way down to the Fairfield 28.

After a Trojan face-mask and no gain, Boyer found Swigart for their second touchdown of the evening. The extra point was missed, tying the game at 13.

Fairfield followed with a four and out after a sack and holding penalty on its next drive, setting up Fort Madison to take the lead.

The Trojans were prepared though as they answer with one of the biggest defensive stops of the game.

Fort Madison drove the ball all the way down to the Fairfield one yard line, but the Trojan held strong.

After standing the Bloodhounds up three times in a row including a tackle for a loss, Fort Madison fumbled on fourth and three to give the Trojans the ball with just over a minute to go.

Maybe it wasn’t meant to be though as the Trojans fumbled on their first play from scrimmage at their own 14 yard line giving the Bloodhounds the ball inside the 10.

Fort Madison ran three plays, running the clock down to 17 seconds. They were able to put the field goal through the upright making it a 16-13 ballgame.

“We just didn’t execute the way we needed,” Weaton said. “We made really basic mistakes. We had five or six holding penalties. We told the guys we didn’t control the controllables and that’s what wins football games.”

The Trojans had 14 seconds on the clock, but time wasn’t on their side in the end.

“We told them, this is a great opportunity for us to learn and really hit stride when we need to hit stride,” Weaton said. “We still got six football games left and that’s a lot of football. We’ve got so much confidence in these guys and we know what their abilities are.”

Look: Aaron Rodgers Is Furious On The Sideline Today