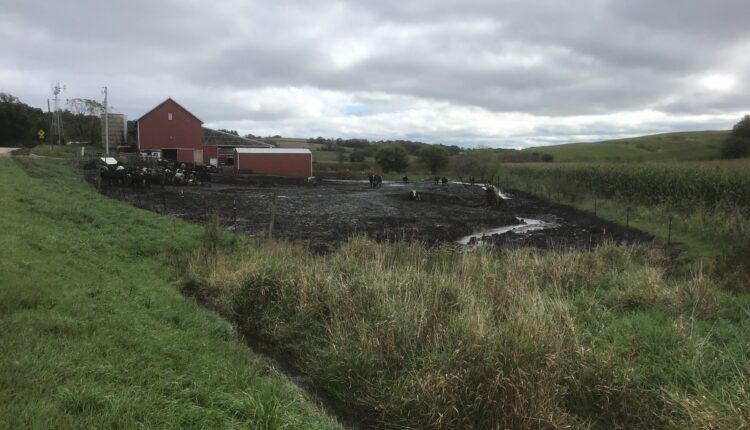 The Aeschbach farm in Primrose where regulators have been attempting to institute better runoff controls while a nearby village gets pollution credits. (Dane County Land and Water Resources Division)

At the Aeschbach farm in Primrose, the Dane County Land and Water Resources Department has been trying since 2019 to get the property owner Wayne Aeschbach to install a fence preventing the farm’s 80 or so dairy and beef cattle from entering the nearby stream and to increase vegetation to prevent runoff.

While Aeschbach has resisted that effort, at the same time, the nearby village of Belleville has made a deal with the farm through the state Department of Natural Resources’ water quality trading program, which allows the village to exceed limits on harmful chemicals it dumps into the water by working to reduce the chemicals entering the water at the farm.

The small farm in the rural Dane County town of Primrose, part of the property has been the subject of numerous environmental enforcement actions from county regulators attempting to prevent runoff from the barnyard from entering a nearby stream.

But another part of the property is enrolled in a state program meant to improve water quality and reduce the amount of contaminants entering a watershed.

The program functions like a carbon credit system, but for harmful chemicals such as phosphorus. A source of pollution, usually from a so-called point source such as a municipal wastewater treatment plant in which the contaminants enter the water from one determined place, has a permit with the DNR outlining the contaminant limit the permit holder can release into the water. At a certain point, it becomes increasingly difficult and more expensive for the permit holder to reduce the pollution through upgrades to the system. Instead, the permit holder can enter into a trade agreement with another entity, often a non-point source of pollution such as a farm, on the same watershed.

The two entities then work together to reduce the pollution from the farm through practices such as turning a field back into grassland or regrading a stream bank to prevent erosion. The pollution reductions achieved at the farm are then applied to the point source polluter, allowing it to meet the terms of its permit.

Yet the agreement between Belleville and the Aeschbach farm shows there can be flaws in a system that creates incentives to target the “lowest hanging fruit” —  farms not currently applying best practices for pollution and runoff management. As a result, a program meant to improve water quality can ultimately have a negligible effect at best.

“Let’s presume that the trade involved management of cropland such as manure, fertilizer applications on cropland and that the county is having problems with the farmer plowing too close to the stream or allowing cattle in the stream,” says Jim Baumann, a retired DNR employee who worked on the program and now works with the environmental group Wisconsin Green Fire. He adds that the agency does a broad review of the cropland involved in the trade, but there aren’t any rules against a trade involving a farm not following the state performance standards.

“It’s entirely possible that you could have a situation where the credit generator is generating credits on one part of the farm and not meeting requirements on another part of the farm, I see it as possible and I don’t see anything in regulation that says it can’t be done,” he says.

The DNR recommends that permit holders looking for trades seek out the heaviest polluting sites on the watershed first.

“You may be aware of a number of significant pollution-generating sites in your watershed; while in other watersheds, you may need to actively seek out these locations,” the agency’s guidance on the trading program states. “If you have several potential sites to choose from, it is recommended to work first with the most significant contributing sites in your watershed. The most significant contributors will likely be able to generate the most cost-effective credits possible.”

The trades can also be lucrative. An agreement between Belleville and a different Primrose farm, according to documents obtained by the Wisconsin Examiner, is set to pay the property owners $200,000 over ten years.

“Often, when you’re siting projects, you’re looking for the biggest bang for your buck,” says Scott Laeser, the water program director at Clean Wisconsin. “Generally speaking you’re going to find those big reductions in places where a mentality of conservation or conservation farming approaches have not been utilized. In some cases that’s lack of awareness; in some cases it’s lack of resources. It is fair to say that there is a broad diversity in the way the farming community has approached managing nutrient runoff.”

Looking for the properties that can achieve a lot of phosphorus reduction without much work, because the current practices result in a lot of runoff, are attractive for permit holders looking to find a trade for cheap, Laeser adds.

“Those projects can be really impactful and offer the best opportunity to reduce a lot of phosphorus with less financial outlay and fewer projects,” he says. “If you’re a point source and you can work with ten landowners on ten projects or two landowners on two projects, you’re probably going to take the latter.”

Rob Michaels, a senior attorney at the Environmental Law and Policy Center, has concerns about trading programs in general. Reducing the phosphorus output from a wastewater treatment plant is definitive and measurable, he says. But the trades are made using advanced modeling systems that deal in hypotheticals involving a non-permitted entity that isn’t supposed to be polluting in the first place. What you end up with is a program that aims to improve water quality but with varying reliability.

“You’re allowing pollution that would have to be reduced under a permit for hypothetical or theoretical reductions for varying levels of reliability,” he says.

The DNR uses a modeling program created by UW-Madison, known as Snap+, to estimate the levels of pollution coming from a given field. Michaels says that even though Snap+ is highly technical, it doesn’t involve direct measuring of nutrient runoff in a water system. Because of the use of the model, he’s concerned about the oversight of a program in which the benefits are only measured by a computer.

The models also have some flaws, according to Baumann. The modeling is only done to the edge of the field, but of course the runoff into a neighboring stream is happening beyond that edge, which can cause miscalculations. 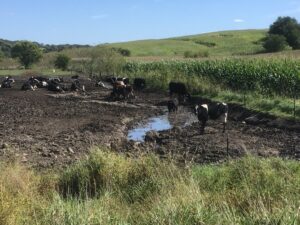 Cows in the trout stream during one of Dane County’s first visits to the property. (Dane County Land and Water Resources Department)

“If you wanted to do a trade between a wastewater treatment plant and control pollutants on crop land, in Wisconsin the estimate of pollutants controlled is done through modeling. And modeling isn’t necessarily bad but the load reduction is modeled to the edge of the field. That doesn’t necessarily mean you’re going to get that load reduction all the way to the stream,” he says. “Some may guess that often the model load estimates are two, three, maybe even four times higher than that actually reaches the stream … I think on the ag crop land situations, you don’t necessarily get a pound for a pound. You get something less.”

The DNR does conduct oversight of the trades, according to Matthew Claucherty, a DNR water resources specialist. The agency reviews and approves each proposed trade, though he says the agreements themselves aren’t submitted for approval. After the trade is in place, the permit holder has an annual self-reporting requirement that involves inspections of its practices and a monthly requirement to submit its discharge monitoring reports to the DNR.

The agency also does site visits to conduct audits of the trades, but there isn’t enough staff to do every trade, every year, so Claucherty says those are done on a revolving basis. He adds that if a permit holder submits poor annual inspection reports, it would be moved up the list to be audited.

Yet Michaels still believes there are questions surrounding the actual reductions that are being achieved.

“It’s a very complicated, clever sounding approach that has some appeal in the abstract and we wouldn’t categorically oppose these things in all circumstances,” he says. “But the issues about how good, how reliable are the reductions that you’re trading for and to what degree are they enforceable, verifiable, to what degree is there actual testing going on … those are the open questions.”

At the Aeschbach farm, the county has spent years trying to get the property in compliance with local ordinances. Yet in some cases, the existence of the trade agreement with Belleville has actually caused more delays to improving the water quality.

“We have been working with noncompliance issues with [Aeschbach] for a number of years,” Amy Piaget, the Dane County conservationist, wrote in an email to the engineer working on Belleville’s trading program. “Our understanding is that the landowner has signed an agreement with the village to implement practices to address barnyard runoff and streambank stabilization. In May of 2020, we issued a notice to the landowner that these practices need to be in place by December 31, 2022. Is the Village still working with this landowner and are the practices expected to be completed by December 31, 2022?”

Aeschbach did not respond to a request for comment. After initially returning an email and phone call, the Belleville village administrator said he was sick and unavailable to comment ahead of publication.

Our stories may be republished online or in print under Creative Commons license CC BY-NC-ND 4.0. We ask that you edit only for style or to shorten, provide proper attribution and link to our web site.