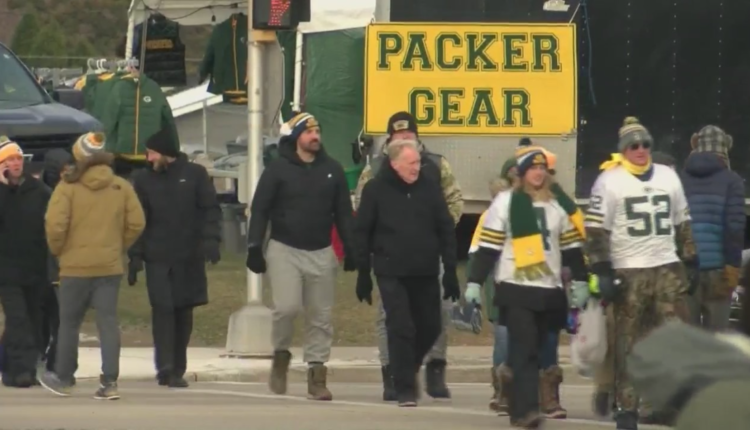 That’s how long it takes to get from New York City to Lambeau Field. It’s a trip that Donna and Steven made in order to see their beloved Green Bay Packers play in person for the first time.

They said they even drove through snow squalls along Lake Michigan so they can be here.

“I said if we’re going to watch an outdoor Packers game, God I hope it snows,” Donna and Steven told Local Five News.

They say they have been overcome with emotion being in Titletown for the first time.

“I cried I called my cousin Brian and he said when you walk into the stadium expect to cry,” said Donna and Steven. “It’s beautiful. You feel how everyone is a Packers fan, it’s family.”

The trip to Lambeau is stop one on a special trip for Steven and Donna. They are heading to Notre Dame to take in a football game this weekend and it’s all part of a late birthday present trip for Donna.

Other fans came from the other side of the country to watch the Packers at Lambeau. Jannina Lopez and Colin Hoff traveled to Lambeau all the way from Orange County, California.

They were prepared for the cold weather.

“We got the warmest stuff we could possibly get, layered up, gloves, parkas, just lots of layers, just making sure we stay warm and cozy just lots of layers,” they told Local Five News. “We were in Milwaukee last night and were outside all night so we were kind of ready for it.”

They told Local Five News this is actually their second time at Lambeau, but it’s their first cold weather game.

“It’s great coming out here,” they told Local Five News. “It has been a dream to come to Lambeau since I became a fan. Last year a guy told us that you are never going to experience Lambeau unless you come during a winter game. So we were like we have to go.”

The Packers lost to the Tennessee Titans 27-17 dropping to 4-7 for the season. A bright point of the evening for fans disappointed about the result was the Packers adding Leroy Butler’s name to their ring of honor on the Lambeau Field facade.

Butler thanked the fans, said they were a big reason he stayed with the Packers his whole career, and even got to do one last Lambeau Leap.

One year after acquittal of Kyle Rittenhouse, battle to define his public image rages on