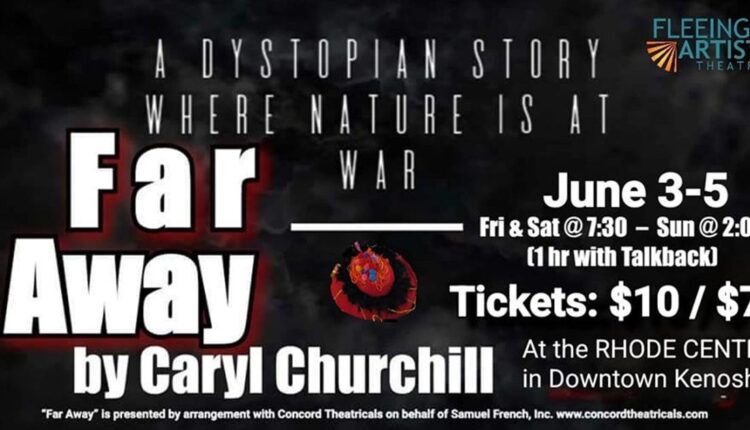 KENOSHA — The Fleeing Artists Theatre, founded in 2018 by Kenneth Montley, Kevin Duffy and Alex Metalsky, wraps up its fourth season with “Far Away.”

The troupe describes the play as “a dystopian drama that’s like ‘Hunger Games’ meets ‘Fahrenheit 451,’ with the British wit and charm of Caryl Churchill.”

British playwright Churchill’s play, which debuted in 2000, has four characters — Harper, Young Joan, Joan and Todd — and is based on the premise of a world in which everything in nature is at war.

The main theme of “Far Away” is fear — more specifically, the fear imposed by a government upon its citizens.

This fear permeates the work done by the characters, from the smuggling of people by Joan’s uncle to the public march of death for prisoners of the government.

The theme is brought to its climax in Joan’s final monologue where she describes being so afraid of the duality created by the propaganda of this new world that she has trouble walking home because she can’t tell whose side a stream is on, or the grass , or the flies, etc., since everything is at war.

The play runs just 45 minutes, but theater critics have described it as being powerful.

After each performance, the cast will host a talkback with the audience.

Performances are one weekend only, with shows at 7:30 pm Friday and Saturday and 2 pm Sunday, June 3-5, at the Rhode Center for the Arts, 514 56th St. in Downtown Kenosha.

Tickets are $10 general admission or $7 for senior citizens, students, educators, first responders and members of the military. (Please bring an ID to the box office for discounted tickets.)

Tickets can be purchased at the door or online at fleeingartists.org.

For first time since ’78, a Racine County woman will be Alice in Dairyland | Local News