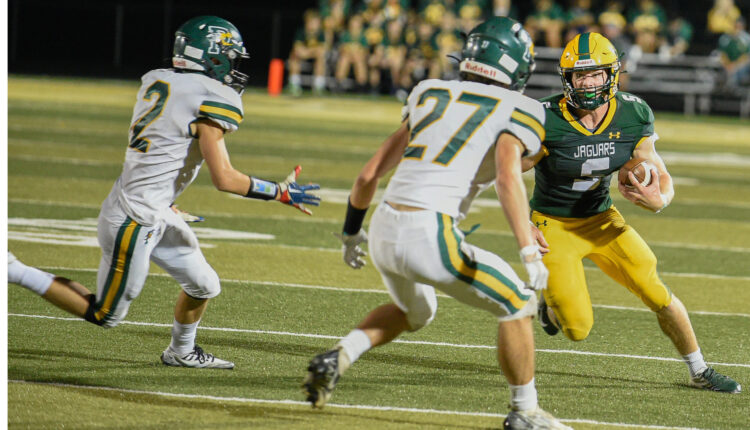 Green Bay Preble, Green Bay East, Green Bay West, Seymour and NEW Lutheran United are all still in search of their first win of the season.

Quarterback Boone Kirst was 14-for-19 through the air for 187 yards and one touchdown.

Jacob McVane added 91 yards on the ground on five attempts and a score. As a team, Ashwaubenon ran the ball 20 times for 299 yards and four touchdowns.

Bay Port quarterback Cole Bensen had another solid week. He ran for 112 yards on 16 carries with three touchdowns and threw for 103 yards and a touchdown.

Blake Buchinger added 132 yards on the ground on 15 attempts. He had three total touchdowns, two via rushing.

During that 17-minute stretch, Bensen had three straight rushing touchdowns (6, 14 and 2 yards). He then hit Buchinger for a 45-yard score and then Buchinger had TD runs of 3 and 2 yards.

After starting the season 0-2, Notre Dame Academy has pulled off three straight wins, the latest a 35-7 drubbing of visiting Sheboygan North.

Ian Blom ran for 170 yards in a week 4, and he topped himself this game. He ran for a whopping 230 yards on 27 carries and three touchdowns.

Triton quarterback Joe Otradovec opened the scoring with a 4-yard run and then Blom ripped off three straight TD runs of 50, 11 and 2 yards.

Christian Collins had a 21-yard touchdown run in the fourth quarter to account for Notre Dame’s final score.

Otradovec was 6-for-13 through the air for 78 yards. James Flanigan had three catches for 51 yards.

Isaiah Lyons had 14 rushes for 26 yards to lead the Red Devils.

Menasha quarterbacks were a combined 28-for-31 through the air for 347 yards.

Jalen Brown had a team-leading 41 yards on 14 carries; he also had 16 tackles on defense.

Bell and Ronald Schmocker combined for 61 yards on 3-for-14 passing.

The Hawks led 42-0 before the Thunder could get on the board as Xavier won 49-6 on the road.

Keanu Chinana had the lone touchdown for Seymour, a 10-yard run in the third quarter.

Mason Bunnell led the way for the Thunder with 16 carries for 80 yards.

Sevastopol scored lone touchdowns in the first, third and fourth quarters to pull away for an 18-0 victory over the NEW Lutheran/Oneida Nation United co-op.

Stats for United were unavailable.