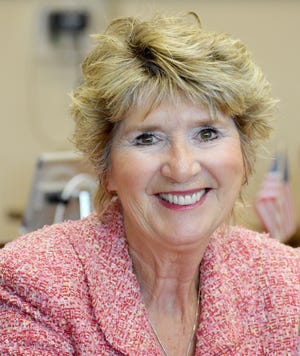 One of Wisconsin’s strangest and longest running open-records lawsuits lurched a bit closer to resolution Wednesday.

The Court of Appeals ruled a PowerPoint presentation about former Racine alderperson Sandy Weidner prepared by the city attorney was not subject to attorney-client privilege, and must be turned over.

Weidner sued to obtain the record in 2017, a lawsuit city officials and a judge kept secret until the Journal Sentinel reported it in 2018. She was found in contempt, before later being named Whistleblower of the Year by an open government group.

Weidner, who retired from council in 2020, said she was pleased by the court’s ruling, but was still concerned.

“There are still some things hanging out there, like the contempt order, and the gag order,” which she said have never been officially respinded. At one point, the city asked a judge to order Weidner pay its claimed costs of $18,000 to seek the contempt order.

“I would never have paid. I’d have sat in jail first,” she said. “The only way I was in contempt was because of the gag, and I should never have been gagged.”

RELATED:In Racine County, a court dispute over access to public records is fought in secrecy

She also concern about getting her attorney’s fees covered. Weidner says she’s spent about $40,000 on the case, and thinks the city has spent about five times that amount.

A Supreme Court decision the same day about when requesters of public records could recoup attorney fees could come to bear on Weidner’s case. Technically, her public records case has been dismissed, but the Court of Appeals ruled the PowerPoint be produced, which would tend to meet the high court’s new narrower limits on when attorney’s fees are valid.

In August 2017, while Weidner was running for mayor, City Attorney Scott Letteney called all 15 members of the City Council to a closed session meeting of the Executive Committee and gave a 72-slide PowerPoint presentation.

Weidner says most of the content was emails she sent under her city account, which Letteney suggested inappropriately shared confidential city information and should be reviewed by the city’s board of ethics.

RELATED:Open-records lawsuit against Racine should not have been secret or been dismissed, rules Wisconsin appeals court

Weidner felt the meeting was meant to embarrass her, damage her campaign and scare other aldermen into communicating less with constituents. She said she did not believe the emails were improper. When she was later denied a copy of the PowerPoint, she sued under Wisconsin’s open records law.

The city persuaded Racine County Circuit Judge Eugene Gasiorkiewicz to seal the entire matter, so it did not appear on the state’s online court records index, before he dismissed Weidner’s petition and refused to accept her amended petition a few months later.

In 2018, while the case was before the Court of Appeals — but still secret — the Milwaukee Journal Sentinel reported on the existence of the case. At the city’s request, Gasiorkiewicz found her in contempt.

After the case was exposed, the Wisconsin Freedom of Information Council and news media groups sued to have it opened.

In 2020, the Court of Appeals ruled the case should not have been completely erased from the public record, nor should it have been dismissed, and sent it back earlier this year.

It wounded up with Kenosha Circuit Judge Chad Kerkman, who dismissed it without a written order, denied attorney fees to Weidner, and allowed some new pleadings to be filed under seal.

In Thursday’s ruling, the Court of Appeals said attorney-client privilege should always be construed narrowly, and even more so when government relationships are involved.

Even if the PowerPoint was privilege, the court found the city waived the privilege when Letteney voluntarily presented it to meeting of council members, that included Weidner.

The city also argued a copy of the presentation differed from showing it to council members. The court noted, “The City provides no case law ratifying the view that once attorney-client privilege is waived as to a particular document regarding a particular viewer, the City can then reclaim the privilege when the viewer asks for a copy of the same document . Wisconsin law provides the opposite.”

Could be a “Long Training Camp” for Green Bay Packers Offense