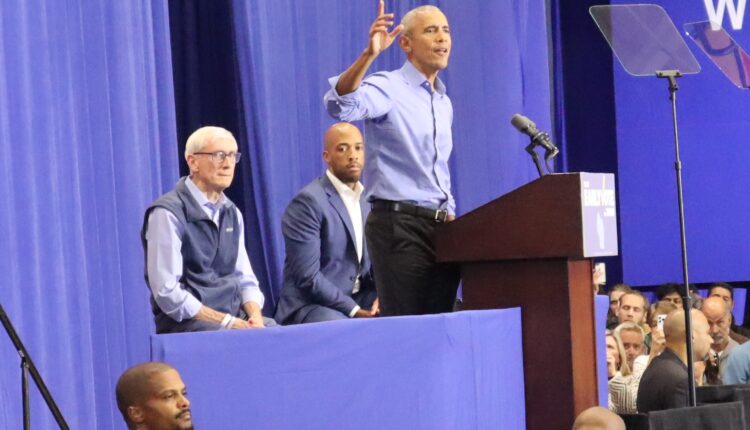 If energy has been building in recent weeks ahead of the November election, it reached a peak in Milwaukee over the weekend. Hundreds of Wisconsinites gathered at Milwaukee’s North Division High School on Saturday to see former President Barack Obama, who appeared on stage alongside Gov. Tony Evers and Lt. Gov. Mandela Barnes, two candidates in tight races, for the governor’s office and U.S. Senate.

North Division High School is located on 10th and Center Street, in Milwaukee’s predominately African American North Side. During elections, the high school serves as a neighborhood polling site. Students and staff who have moved through its halls include people who now serve in elected office, including Congresswoman Gwen Moore, one of the speakers at the rally and the former president of North Division’s student council. Moore delivered her remarks in her trademark fiery yet humorous style, mentioning that she is both a member of Congress and a great grandmother.

“It’s really hard not to be reminded of what is at stake,” Moore said of the coming election, referring specifically to Wisconsin’s 1849 abortion ban, which went into effect when the U.S. Supreme Court overturned Roe v. Wade, and which Republicans have refused to amend. Moore recalled hearing from her son, Rep. Supreme Moore Omokunde (D-Milwaukee) who was there when Evers called a special session to take up a constitutional amendment process that would allow voters to weigh in on the state’s Civil War-era abortion law.

Attorney General Josh Kaul brought up the case of a Wisconsin woman who suffered an incomplete miscarriage. She was left to bleed for 10 days as her doctors worried that they might be charged with criminal penalties under the 19th century ban if they treated her. “The idea that parents now have to worry that if they get pregnant, their kids at home may be left without a parent because of a draconian backwards 19 century law — it’s wrong,” said Kaul. 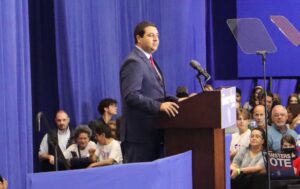 Four days after the Supreme Court’s decision, Kaul joined the Evers administration in filing a lawsuit to block enforcement of that law. Kaul’s Republican opponent, Eric Toney, supports enforcement of the abortion ban. Republican candidate for governor Tim Michels has stated he personally supports bans in cases of rape or incest. However, at in a recent speech to the Milwaukee Rotary Club, he said he’d be open to signing a bill banning abortion with rape and incest exceptions if he were elected.

Lt. Gov. candidate Sara Rodriguez, a public health nurse, also highlighted the abortion ban as an important issue in the upcoming eleciton. “I’m on the Health Committee in the Assembly,” Rodriguez said. “When all of these anti-abortion bills came and all these men, they were all men who testified, I asked simple, clinical, medical questions. And what did the chair of that committee do? He gaveled me so I could stop asking questions, and called me ‘a nasty woman.’” Rodriguez said she resolved not to stay silent in such moments to a loud cheer from the crowd. Sen. Tammy Baldwin also spoke during the rally, referencing many of the same issues. At one point the crowd chanted “Tammy” “Tammy” in one of the loudest moments of the evening. 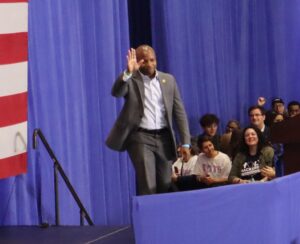 Michels has stated he supports breaking up the Department of Natural Resources into two parts, with each serving either businesses or  hunters. The department has a key role in managing climate change programs, wildlife conservation, and implementing drinking water testing and remediation in cases where water is contaminated. Milwaukee County Executive David Crowley stressed the importance of the November election to future elections. “This election will reverberate for many generations,” said Crowley. “Too often that is true, but it seems that every election we seem to be fighting against forces who oppose democracy. They actually want fewer citizens to vote.” Crowley said he feels as though the country has gone back a half century and that rights are being debated which were “won long ago.”

Barnes told the crowd, “This is a fight for freedom, a fight for fairness. This is a fight for our future.” Evers, who was well received despite admitting to not being “the flashiest guy in the room,” touted the accomplishments of his administration including investing in Wisconsin schools, infrastructure, and supporting clean water programs.

Then came the moment the crowd had been waiting for. America’s first Black president, took the stage smiling broadly and waving to the cheering crowd, then described his dismay at how the political environment has changed since he was in office. Pointing to “the breakdown of basic civility and basic neighborliness,” Obama said,  “nowhere do you see it more than in our politics where you had politicians doing their best deliberately to stir up division, to make us angry and afraid of each other, just for their own advantage.” Often, the former president noted, those feelings are amplified by media and social media which “finds its profitable to promote controversy and conflict instead of facts and truth.” 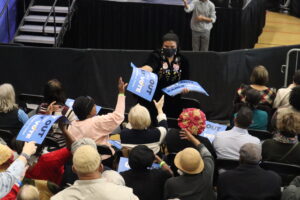 Obama referenced the recent attack on Paul Polosi, the husband of House Speaker Nancy Polosi. The Polosi home was invaded by an individual looking for the speaker, who attacked her husband with a hammer instead. Obama condemned “this habit of saying the worst about other people, demonizing people. That creates a dangerous climate. And if elected officials don’t do more to reject this sort of over-the-top crazy rhetoric and they keep on ignoring it, or tacitly supporting it, or in some cases encouraging it …if they’re telling supporters, ‘You have to stand outside of polling places armed with guns and dressed in tactical gear,’ you know that’s the kind of thing that ends up getting people hurt. And just as significantly it violates the basic spirit of who we’re supposed to be as a democracy.”

Obama looked told the  crowd he understands the urge to tune out and not pay attention to politics. “But I’m here to tell you, Milwaukee, that is not an option. Just hoping is not an option. Because the only way to make this economy fair, to make it work for everybody, is if we all fight for it. The only way for us to make our democracy stronger is if we nurture it, and work for it. And that starts with electing people who know you. Who see you. Who care about you. Who know what you’re going through.” 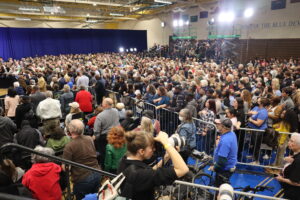 A view of the crowd that gathered at North Division High School for the rally with former President Barack Obama. (Photo | Isiah Holmes)

Obama brought up  a slew of issues, including book banning, the potential reversal of equal marriage rights for same-sex couples and ongoing attacks on the LGBTQ community. As a constitutional lawyer Obama reflected on the far-reaching implications of overturning Roe v. Wade. “If there’s no right to privacy, then same-sex marriage should be at risk,” said Obama. “That this same idea of a right to privacy that was the basis for saying that states couldn’t ban inter-racial marriage.”

Obama also addressed Sen. Ron Johnson’s campaign and record, including racist ads that darken his opponent Barnes’ complexion and seek to connect him with violent criminals.Looking over and pointing at Barnes affirmatively, Obama denounced the notion that Barnes is somehow “different,” as some of the advertisements have said. Jokingly, Obama warned Barnes to make sure he has his birth certificate at the ready,  a reference to the attacks on Obama by people, including former President Donald Trump, who falsely claimed he wasn’t born in this country.As Obama listed the threats posed by Republican politicians, the crowd booed. Booing doesn’t do anything, the former president declared. Rather, he implored, “Don’t boo, vote.”

Over 8,700 vote in-person absentee in Madison in first five days