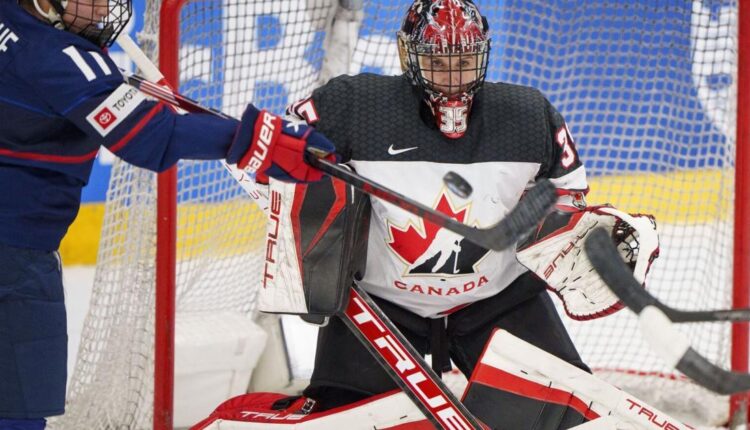 The former University of Wisconsin women’s hockey goaltender made 20 saves in Canada’s 2-1 victory against the United States for the World Championship crown on Sunday in Herning, Denmark.

The victory completed a hat trick of Canadian triumphs over the US in women’s hockey championship games 2022. Canada won gold in the Olympics in Beijing in February and at the under-18 tournament in Madison in June.

Desbiens, the 2017 Patty Kazmaier Award winner as top player in women’s college hockey, was in goal for the Olympic victory as well. She was one of six former Badgers players who earned gold Sunday. The others: forwards Sarah Nurse, Emily Clark and Blayre Turnbull, defender Meaghan Mikkelson and backup goalie Kristen Campbell.

Former UW forward Abby Roque scored the only goal for the US to cut Canada’s lead to 2-1 late in the second period. She earned silver along with former Badgers forward Hilary Knight and three members of the UW team that will start school this week: forwards Lacey Eden and Jesse Compher and defender Caroline Harvey.

Kristen Campbell, a goalie who played at UW from 2017 to 2020, is making her first appearance at a World Championship. She was part of Canada’s gold medal-winning Olympic team in 2022.

Forward Jesse Compher, who’s joining the Badgers for the 2022-23 season after playing at Boston University from 2017 to 2021, is on the US roster for the World Championship for the third time. She played in the 2022 Olympics.

Goalie Ann-Renée Desbiens backed Canada’s run to the 2022 Olympic gold medal and is playing in her third World Championship. She played at UW from 2013 to 2017 and won the Patty Kazmaier Award in her senior season.

Forward Lacey Eden is playing in her second World Championship; she earned silver in 2021. She joined the Badgers midway through the 2020-21 season and missed the 2021-22 season while in the USA Hockey Olympic residency program.

Caroline Harvey, who’s due to start her Badgers career this fall, is making her second World Championship appearance. The defender has silver medals from the 2021 event as well as the 2022 Olympics.

Four-time Olympian Hilary Knight is on the US roster for a World Championship for the 12th time. She scored the overtime goal that gave the Americans the gold medal in 2017. She played for the Badgers from 2007 to 2009 and 2010 to 2012, finishing as UW’s all-time leading scorer.

Defender Meaghan Mikkelson is playing in her third World Championship but first since 2017. She was part of Canada’s 2018 Olympic team but wasn’t selected for the 2022 roster while she returned from an injury. She played for the Badgers from 2003 to 2007.

Sarah Nurse set an Olympic tournament record with 18 points as Canada won gold in 2022. A Badgers forward from 2013 to 2017, she is playing in her third World Championship.

Forward Abby Roque, a Badgers player from 2016 to 2022, is playing in the World Championship for the second time. She was selected for the 2020 tournament that was canceled because of the pandemic and won silver in 2021. She also was on the US Olympic team that won silver in 2022.

Forward Blayre Turnbull, who skated for the Badgers from 2011 to 2015, is playing in her fifth World Championship and won gold in 2021. She broke her right leg in the team’s celebration and received her gold medal while on a stretcher. She returned to be part of her second Olympics in 2022.