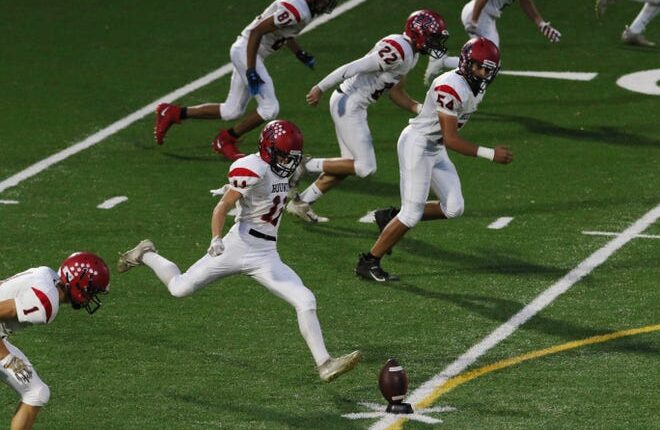 Wellman wanted to show why he is considered one of the top kickers in the nation. He wanted to be on the field with his teammates, sharing every experience, helping the Bloodhounds push for a playoff berth for the first time since 1989.

Instead, Wellman had to watch from the sideline, lead at practices, cheer on his teammates.

A torn anterior cruciate ligament in his right (kicking) leg last spring not only ended his soccer season, but his senior season of football, as well.

Instead of moping and pouting, Wellman has found a role on the team, both in practices and in games.

Fort Madison (7-2) will play third-ranked Waverly-Shell Rock (9-0) in a Class 3A first-round playoff game at 7 pm Friday at Waverly.

While Wellman won’t be out there with his friends and teammates, he will be on the sideline doing his part to help try to bring home a playoff win. It’s what a good teammate and leader does.

“It’s definitely a character builder going from last spring sitting on the soccer bench. That was an eye-opener,” Wellman said. “Going into this football season knowing I had no opportunity to play. Before the season I was really trying to find myself who I wanted to be on the team. Once I showed up at that first practice, seeing all my teammates who I had been putting in all the work in in the weight room since sixth grade, I knew I couldn’t just hang them out to dry, so at practice I have a whistle in my hand.I am hoping they understand the potential that they have. “

All was going well last year for Wellman before the injury. He went to a Kohl’s Kicking Camp last December where he made a strong showing. He also participated in the a Future Stars camp in Florida and was receiving invitations from numerous other camps before the injury.

“Last December I went to Kohl’s kicking camp over in Chicago. I did really well there and got nationally ranked. I got a couple stars,” Wellman said. “I got invited to the Future Stars camp down in Florida. I went down there in January. Then I started to get all these college camps starting to roll in — Oregon State, Minnesota, Iowa State, TCU, Mississippi State, Missouri. Unfortunately I tore my ACL so I had to cancel all of those.”

As the son of Fort Madison boys soccer coach Kevin Wellman, Xander holds himself to a higher standard than most. He knows if he doesn’t lead by example, the train could quickly derail.

“It’s always that coach’s kid mentality where everyone is going to point you out if you aren’t the one working hard. You’ve got that name for yourself. I was never able to line up on a line to do sprints and not give everything I have. I definitely feel like my dad being my coach has led me to be a fierce competitor,” Xander Wellman said. “It’s difficult, but it’s also super rewarding. There are practices where I want to goof around with my teammates and you can’t necessarily. I’ve had to find my own way to have fun and form those connections with my friends on the team. My dad is a very smart man, a really good coach. He really understands the family atmosphere that is important on a team. He’s helped my build those connections with my teammates and lead that way. But ultimately having someone there every practice to push you is big. Even outside of practice he tells me I can’t be the worst out there. I have to give the most effort. It’s really built who I am.”

This year, he has worked with sophomore Henry Graham, who looks to be the kicker of the future for the Bloodhounds.

“He is a new kicker on the football team this year. We’re working a lot on field goals for him maybe to take that position next year, although Leif is doing a fantastic job this year. I worked with Leif a lot last year When I was kicking with him. I helped him a lot. We worked a little bit over the summer with me just telling him and helping him fix his form a little bit,” Wellman said. “Henry came in from never playing football before and he’s kicking butt. He’s had a couple tackles on kickoff, which makes me proud. And he’s got a few touchbacks, too, as a sophomore. I definitely see him following in my footsteps. He has the chance to play in college, too, if he chooses.”

Wellman plans to be back in time for his senior season of soccer with the Bloodhounds. He already is starting to do some physical activity.

“My trajectory to be back is late January or February. I’ll be back before March, which is really pushing it for soccer, which starts early March,” Wellman said. “I’m going to rely on my dad to put me on a leash there. If you know competitors at all, it’s hard to put yourself on a leash and pull the reins back.”

Wellman, who plans to attend the University of Northern Iowa to major in business management and finance with a minor in entrepreneurship and plans to try to walk onto the football team, is doing what he can to help the Bloodhounds succeed. While he can’t be on the field playing with his teammates, he still wants to be a good teammate.

Matt Levins is a sports reporter for the USA Today Network in Burlington, Iowa, who has covered local sports for 32 years at The Hawk Eye. Reach him at [email protected]