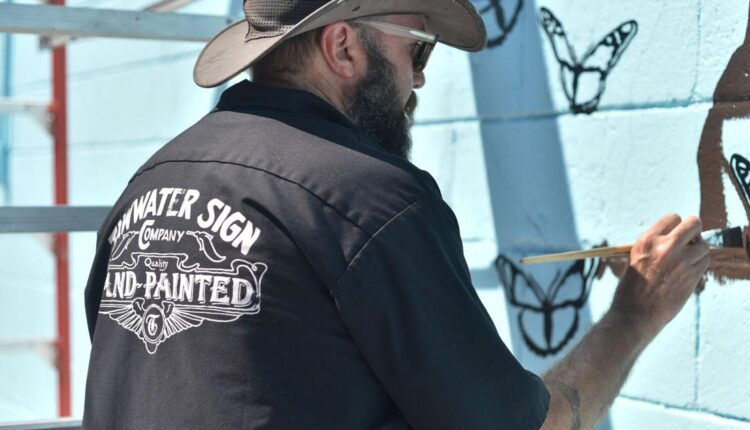 Adwoa Asentu stands in the Muse33 gallery in West Allis during an art show in which some of her work — including the two portraits at right — was displayed.


RACINE — Adwoa Asentu began writing poetry in middle school as a way to express her feelings that could not be expressed in everyday conversations.

Inspired by her grandmother, a published poet and playwright, and her mom, who encouraged her to stay true to her gift, Asentu continued communicating through her poetry.

The fourth Wall Poems of Racine will feature an excerpt of Asentu’s work. The mural is currently being added to a wall at 814 Memorial Drive, which can be seen from the intersection of Memorial and Ninth streets.

Asentu, a Racine native who went to Gilmore Middle School and Horlick High School, said it meant a lot to be included in the project that places her work in the public space for as long as the wall stands.

“Racine is a big part of who I am,” she said. “I think that legacy is so important … Being able to leave something behind that people can remember me by is very special, and I am grateful that I was selected to be a part of this project.”

Painter Dean Tawwater was at the wall on Tuesday, painting the mural of branches and butterflies that will soon accompany the poem by Asentu.

The project is inspired by The Wall Poems of Charlotte in North Carolina. Unlike the Charlotte version, Racine’s project focuses exclusively on the rich and diverse local community of poets. The murals combine both visual and literary art, much like a poetry broadside.

Local artist Dean Tawwater is shown painting the latest mural from ArtRoots Wall Poems of Racine. ArtRoot describes itself as a committee of artists and arts advocates who are determined to reinvigorate Racine through the arts.

Asentu learned from her grandmother and mother the importance of writers being authentic.

She spoke of two writers in particular who were an example to her: Maya Angelou, Toni Morrison and Zora Neale Hurston.

In particular, she appreciated how unapologetic Morrison was in her life and works.

“She’s very specific and intentional about creating literary works that speak to Black people and our experience and our culture,” Asentu said.

She also admired the way Hurston was able to capture the voice of Black men and women of the South—though she was criticized in literary circles for her use of dialect. “That was special,” she said of Hurston’s work, which portrayed Black men and women authentically and did not tailor the language to make it acceptable for others.

For so long, Black artists — with special reference to writers — were expected to edit or tailor themselves and their work to fit into literary spaces dominated by white writers.

In addition to the example set by these influential Black authors, Asentu carries with her the advice from her mother: your gift will make room for you, so don’t be afraid to walk in your purpose, and don’t be afraid to do what you were meant to do.

Asentu has followed that advice and intends to craft a website that features her poetry. Additionally, she intends to collect some of her poems for a published book.

She sent her gratitude to Nick Ramsey and the others in ArtRoot for their “effort to find and include Black female artists to lift us up and lift our works up. I really appreciate that.”

Asentu said her hope for the future was the continuation of Wall Poems of Racine, so that other Racine artists could be highlighted for the positive things they do for the city.

Wall Poems of Racine is an effort of ArtRoot, which describes itself as “a committee of artists and arts advocates who are determined to reinvigorate Racine through the arts.”

The first mural in the Wall of Poems Racine project was completed in summer 2020, visible on the south side of the Great Lakes Warehousing building in the 1400 block of 16th Street.


The third of the first three Wall Poems of Racine is shown here in Uptown Racine.


The project’s fourth mural was the design of Janet Arriaga, who was a student at the University of Wisconsin-Parkside.

According to the Wall Poems of Racine website, artroot.org/wallpoems, each year a poetry selection committee made up of local writers selects several poetry excerpts from Racine poets and provides them to the UW-Parkside graphic design students.

Each student chooses an excerpt to incorporate into a design, which are then presented to a design review committee, who provides feedback to the students.

Kelsey Marie Harris pauses Oct. 23 in front of an Uptown mural depicting her poem, “When I Die, Bury Me A Tree,” which has become the second mural presented by the Wall Poems of Racine group.


Ramsey, of ArtRoot, thanked the building’s owners: Dean Paros, who was instrumental in moving the project forward; Jamie Anderson and Jerry Boehme.

While ArtRoot has had some private donations to the project over the years, the organization especially appreciated the $5,000 grant from the Wisconsin Arts Board, which provides grant funding through the Creative Communities Grant

The mural will be officially unveiled in late September.

Lanterns in The Branch

Since Friday, community-painted lanterns have been lighting up Uptown.

Homemade lanterns hang in a walkway along Washington Avenue in Uptown.


People walk underneath lanterns in Uptown


Community-made lanterns at The Branch at 1501

A Friday party at The Branch at 1501, 1501 Washington Ave., celebrates the lighting of community-made lanterns, the second such neighborhood project in Uptown. For more photos from the party and of the lanterns hanging in Uptown, visit JournalTimes.com/gallery


Lanterns in the night

In 2021, homemade lanterns hang in a walkway along Washington Avenue in Uptown

In 2021, homemade lanterns hang in a walkway along Washington Avenue in Uptown