Free Thanksgiving dinner will be back next week at Festival Hall 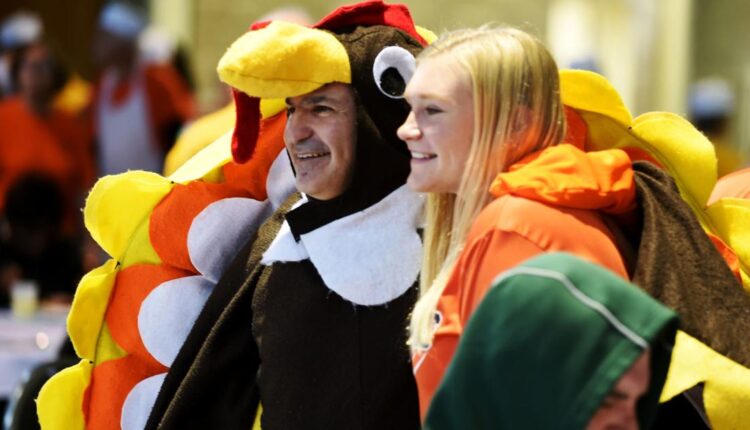 RACINE — Dan & Ray’s Rendering Thanks free Thanksgiving Day feast will be held from 10 am to 2 pm Thursday, Nov. 24, at Festival Hall, 5 Fifth St.

The organizers are still seeking sponsors for this year’s 13th annual event.

Thursday, Nov. 25, 2021, meals were marked by another packed house at Dan & Ray’s Rendering Thanks at Festival Hall, the annual tradition led by Ray Stibeck of Route 20 and Danny Johnson of Danny’s Meats & Catering where traditional Thanksgiving are served to all .That year’s was the 12th annual.


Dan Johnson of Danny’s Meats/Catering by Danny at Hickory Hall and Ray Stibeck of Route 20 will again host the annual dinner.

A traditional Thanksgiving buffet style meal will be served along with beverages and an assortment of desserts. Carryouts and a sit-down meal will be provided.

Entertainment featured throughout the day will include singer Cheryl McCrary, Dan the One Man Band, dance teams, various special guests and football on the big screen.

Nonperishable food items will be accepted at the door to benefit the Racine County Food Bank.

Scan this QR code with a smartphone to donate via Venmo to Dan & Ray’s Rendering Thanks, or search for @route20cares on the Venmo phone application

More than 300 volunteers made the ninth annual Dan & Ray Rendering Thanks free Thanksgiving meal at Festival Hall possible on Thanksgiving 2018.


Sponsor names will be listed on the placemats, but the deadline is Thursday to get sponsorships confirmed.

Cash donations will also be accepted at the door.

Go to facebook.com/renderingthanksracine for more information.

IN PHOTOS: Dan and Ray’s Rendering Thanks community meal 2020

Racine Police Department Lt. Adam Malaraca keeps an eye on Downtown Racine traffic heading for Festival Hall on Thursday morning for the 11th Annual Dan & Ray’s Rendering Thanksgiving Dinner. Huge crowds, lined up as early as 7 am for the 10 am opening of the drive-through event, spurred traffic backup east on Sixth Street and South on Pershing Drive to the entrance to Pershing Park, and west on Sixth and south on Lake Avenue to Ninth Street.

Among the masked community volunteers boxing up complete Thanksgiving dinners in the Festival Hall kitchen on Thursday morning were, from left, event co-founder and namesake Ray Stibeck, Jodie Hoffman Ruffalo of Mount Pleasant, and Festival Hall general manager Ricki Ghani. The 11th annual Dan and Ray’s Rendering Thanks free Thanksgiving meal shifted to drive-thru only due to the COVID-19 pandemic.

Manuel Gallardo of Racine, a 20-year chef with Danny’s Meats and Catering in Caledonia, prepares turkey meat in the Festival Hall kitchen on Thursday morning.