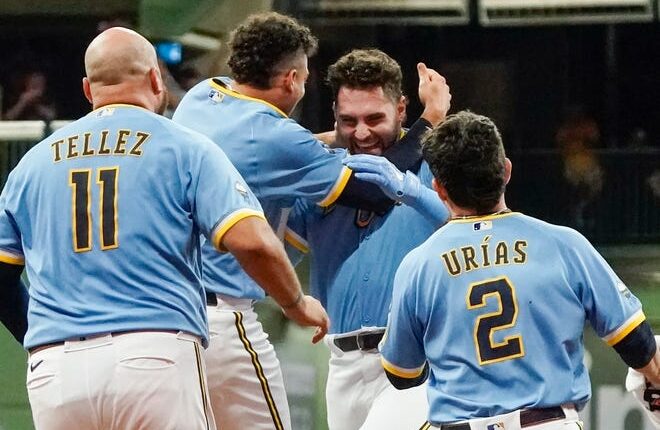 What a way to open an all-New York homestand.

Garrett Mitchell lined the game-winning single to center field with two outs in the ninth inning, and the Milwaukee Brewers outlasted the Yankees, 7-6, in a 4-hour, 10-minute grinder of a game Friday night at American Family Field .

Willy Adames did much of the heavy lifting early, driving in four runs with three coming on his 29th home run in the second inning, a blast that tied him with Robin Yount for the single-season franchise record by a shortstop with 29.

Seven Milwaukee pitchers also combined to keep Aaron Judge from adding to his homer total of 57 as he chases Roger Maris for the single-season American League record.

With the San Diego Padres also beating the Arizona Diamondbacks, the Brewers remained 1 ½ games out of the third and final wild-card spot in the National League.

There was plenty of positive momentum to be gained from this one, however, as Milwaukee overcame a five-run deficit for its largest come-from-behind victory of the season.

“Look, it’s a really good win,” manager Craig Counsell said. “To come back from that, any time of the year, it takes a big effort from a lot of people and a lot of people doing a great job the rest of the game.

“That’s what we got – we got a whole bunch of people doing really good stuff, and it led to a really good win.”

With the game tied at five, Counsell called on closer Devin Williams to pitch the eighth, and the move turned out to be a success with Williams inducing a groundout from Judge and then striking out Giancarlo Stanton and Gleyber Torres.

Milwaukee then got runners on the corners with two outs in the bottom of the eighth against Jonathan Loáisiga before Adames pulled a grounder deep into the hole at shortstop that Isiah Kiner-Falefa got a glove on but couldn’t field cleanly.

Keston Hiura scored as Adames crossed first base pounding his chest, with the Brewers taking the lead courtesy a walk, an infield single, an overturned call at first base and then the boot by Kiner-Falefa.

The good feelings were short lived, however.

Rather than sending Williams out to the mound to face the right-handed-hitting Josh Donaldson to start the ninth, Counsell went with left-hander Taylor Rogers.

Donaldson responded by hitting a 1-2 slider off the foul pole down the left-field line for the tying homer.

“I thought about it and decided not to do it,” Counsell said when asked about having Williams face Donaldson. “I just didn’t want to put Devin out there for multiples in this spot.”

Then Oswaldo Cabrera – a .198 hitter coming into the game – doubled to right-center to reach base for the fifth time in as many plate appearances. Rogers (4-7) eventually recovered to strand Cabrera at third.

But Garrett Mitchell gets the game-winning, walk-off hit for the Brewers

Yankees manager Aaron Boone was ejected while Clay Holmes warmed up and Hunter Renfroe greeted Holmes with a first-pitch double to left-center.

Renfroe, on the move, eventually made it to third on a Kolten Wong ground out.

The Yankees went with a five-man infield and Andrew McCutchen walked to put runners on the corners. Jace Peterson struck out, then Victor Caratini walked to load the bases for Mitchell.

Down in the count, 1-2, Mitchell smoked a slider back through the box to give Milwaukee its ninth walk-off victory of the season and the centerfielder his biggest moment to date since being called up from Class AAA Nashville on Aug. 27.

“It’s pretty cool. It’s pretty special,” said Mitchell, who upped his season average to .182 with the hit. “To be in that situation, that opportunity, I’m thankful to God. Something like that, those types of moments, are things you’ve been working for your whole entire life as a kid.

“I’m just thankful to be in that moment and to have that opportunity to help the team win.”

Milwaukee, which has the majors’ best record in interleague play this season at 14-4, had previously come back from a four-run deficit to beat the Atlanta Braves, 7-6, on May 18.

Brewers were in a big hole early as Adrian Houser struggled

What turned out to be a 35-pitch first inning started innocently enough, with Judge dribbling an infield single to third base.

The Yankees parlayed that into four more baserunners, getting onto the scoreboard on a Donaldson sacrifice fly that scored judge and then extending their lead on RBI singles by Kiner-Falefa and Marwin González.

It was an opening frame reminiscent of the one Houser produced at Colorado last Monday, when the Rockies scored three times in the first only to see Houser bounce back to retire the next 15 batters he faced in an eventual victory.

No such luck in this one for the right-hander, however, as New York loaded the bases with nobody out in the second – including a Judge check-swing single – and went on to score a couple more on a groundout by Donaldson and a throwing error by Kolten Wong, who tried in vain to turn a double play.

Willy Adames gets team back in game with a three-run home run, ties Robin Yount record

A two-out, three-run homer by Adames in the bottom of the second got the Brewers back into it and Houser worked around a pair of baserunners in the third to keep the Yankees from scoring for the first time on the night.

“There’s never a bad time for a three-run homer,” quipped Counsell. “Look, 5-0 and 5-3, it’s totally different energy. Say what you want, but it’s different energy. The second it was 5-3, you’re in the game. A baserunner and a base hit and it’s a tie game.

“We tied it up pretty quick there and both bullpens did some solid work and it went from there.”

In an interesting twist, the homer came on the same day Yount celebrated his 67th birthday. Yount set the franchise mark with 29 homers in 1982.

Having thrown 85 pitches to get to that point, Houser was replaced by Peter Strzelecki for the fourth. Houser allowed seven hits, the five runs (four earned) and four walks with a strikeout.

Houser deserved credit for battling to get through the third inning with the Brewers in a tough spot with their pitching staff. But overall the performance was a letdown, considering the positive momentum he’d generated coming into the game.

After a scoreless fourth from Strzelecki, Montas faced two batters in the bottom half – walking Mitchell – before Boone brought in left-hander Lucas Luetge.

Christian Yelich foiled that strategy by singling, then Adames lined a ground-rule double to right that scored Mitchell. Rowdy Tellez followed with a sacrifice fly to left that scored Yelich, and Milwaukee was back to even at 5-5.

Justin Topa, Hoby Milner and Brad Boxberger bridged the game from Strzelecki to Williams and did yeoman’s work.

“Every one of them did a heck of a job,” Counsell said. “They got big outs, some quick innings. I thought Box had a really good inning. I thought Justin Topa’s outs were big in the middle of the game to put the game in order a little bit and get us farther along.

“And the other thing is, I don’t think we taxed anybody too bad. We should be in a pretty good spot tomorrow to keep going. To only get three innings from your starter tonight, I think we’re in pretty good shape .”

The Yankees are visiting Milwaukee for the first time since May 9-11, 2014.

5 key matchups to watch in Green Bay Packers vs Bears