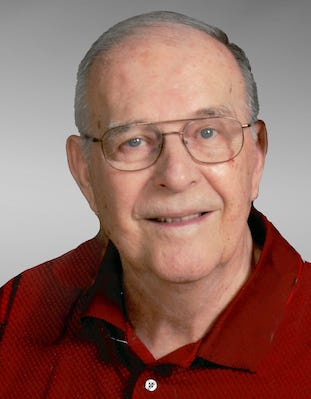 Gerald J. “Jerry” Clabots, 87, Green Bay, passed away on Thursday, January 12, 2023. The son of the late Thomas F. and Henrietta (Blackford) Clabots was born on September 10, 1935. Jerry was a graduate of Central Catholic High School. After graduation, he was enlisted in the US Navy, where he served in the Korean Conflict. Upon his return he met LoAnn Heyrman. They were united in marriage on June 7, 1957. Together they had three sons. LoAnn preceded Jerry in death on March 12, 1998. On May 18 2002, Jerry married the former Mary Geniesse. He enjoyed playing cards, especially cribbage. Above all else, Jerry loved spending time with his wife, Mary. Whether they were enjoying a meal at River’s Bend or dancing at the Holiday Inn, Jerry cherished the time they spent together. He is survived by his wife of 20 years, Mary; Jerry’s sons, Scott Clabots (partner Julie Goodletson), Stephen Clabots, Christopher (Ann) Clabots; step-sons, Brian Saunders (partner Joy), Steve Saunders; grandchildren, Jessica (Mike) Cloutier, Nicole Clabots, Laura (Justin) Forster, Andrew Clabots (partner Cora Fietzer), David (Stephanie) Clabots; great grandchildren, Jordan, Thomas, Brooklyn, Liam, Logan, Adelyn, and Ryan; sister-in-law, Mary Jane Clabots; as well as nieces, nephews, other relatives, and friends. Jerry was preceded in death by his wife, LoAnn; his parents; as well as his siblings, Thomas Clabots, Anita (Walter) Barbu, Mary Peterson, Rev. James “Finnian” Clabots. Friends and family will gather at SS. Edward and Isidore Catholic Church, 3667 Flintville Road on Wednesday, January 18 from 9:30 – 11:00 am The Mass of Christian Burial will be celebrated at 11:00 am, with Rev. David J .Hoffman officiating. Burial will be in the church cemetery. To send online condolences, please visit www.BlaneyFuneralHome.com. In lieu of flowers, a memorial fund has been established in Jerry’s name.

Spring school board election candidates filed for 2023 across Kenosha County