Getting past toxic partisanship: Dairy farmers and undocumented workers 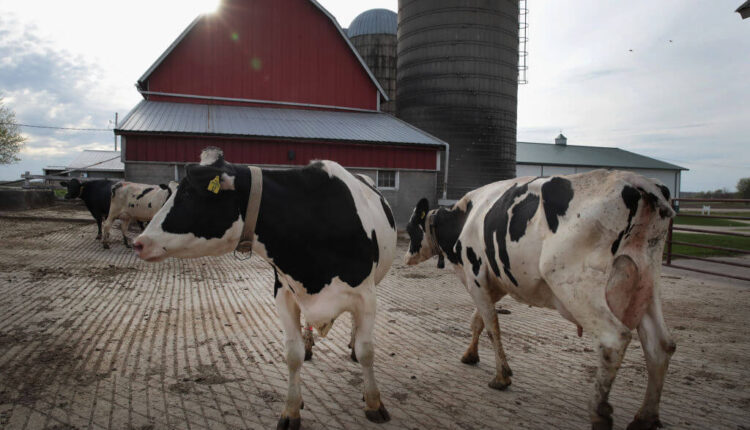 Throughout the late summer and early fall I’ve been traveling, giving talks at bookstores, libraries and university classrooms in various cities about my new book  “Milked: How an American Crisis Brought Together Midwestern Dairy Farmers and Mexican Workers.”

The subject of my book — the deep economic and personal relationships between dairy farmers and the immigrant workers who do most of the labor on their farms — feels as timely now as it did when I first started my research back in 2017, when my family and I moved to Mexico for a year at the start of Donald Trump’s presidency.

Now, as then, our country is heavily dependent on undocumented Mexican and Latin American workers, even as politicians have insulted them, attacked them and enacted policies — including taking away their driver’s licenses — that make their lives even harder.

Now, as then, whole industries, especially the Wisconsin dairy industry, would collapse without the labor of undocumented immigrants, who perform an estimated 80% of the work on Wisconsin dairy farms.

But what interests me the most about the subjects of my book are the deep, personal relationships that have developed over the last couple of decades between Midwestern farmers and Mexican workers — two groups of rural people who have been thrown together by global economic forces beyond their control.

I traveled with a group of farmers through Mexico with a nonprofit group called Bridges/Puentes, created by Shaun Duvall, a high school Spanish teacher from Alma, Wisconsin. It was her inspiration, after working as an interpreter on dairy farms in her area, to take the farmers to visit their workers’ families. Since 2001 they have taken trips every year, building cultural understanding and admiring the homes and businesses their workers have built with the money they make milking cows up north.

One farmer, Chris Weisenbeck, described his visits to the little villages of rural Mexico as stepping into a scene from his own past, when tight-knit rural communities were thriving. Watching a group of neighbors working to build a house together, he commented, “It’s about neighbors helping neighbors and everybody working together. Small town Mexico, small town U.S.A.—same thing.”

Wisconsin has the No. 1 rate of farm bankruptcy in the nation. We’ve lost more than half of our family farms since the year 2000. Those farms that managed to remain in business did so by growing bigger and producing more milk, to keep up with depressed prices and a volatile market — conditions made worse by the North American Free Trade Agreement (NAFTA), which exacerbated the decades-long  “get big or get out” trend in farming.

NAFTA also drove about a million Mexican farmers off their land in its first decade, when the U.S. started dumping cheap, subsidized corn on Mexico under the new, looser trade rules — another force driving large numbers of Mexican laborers to come north looking for jobs.

After years of farming with only family members and the occasional hired hand, about 20 years ago, dairy farmers in Wisconsin and Minnesota started looking for full-time help to run their rapidly expanding operations. Unable to find enough local workers to fill the void, the farmers in my book were thrilled when Mexican workers came to take year-round jobs milking cows.

But because there is no such thing as a year-round visa for low-skilled agricultural work, immigrant dairy workers are almost all undocumented.

A couple of weeks ago, during the World Dairy Expo in Madison, several big, national dairy groups held a press conference to demand that the U.S. Senate pass the bipartisan Farm Workforce Modernization Act, which would create a visa program for year-round agricultural workers. That legislation, which passed the House twice, has been hung up in the Senate and prospects for its passage by the end of the year are growing dim.

Meanwhile, anti-immigrant rhetoric is reaching a fevered pitch ahead of the Nov. 8 elections. U.S. Sen. Ron Johnson (R-Wis.) has issued a lot of dark warnings about immigrants pouring over the southern border, and has made statements that appear to support the right-wing fringe notion that immigrants threaten to replace American workers. Dairy farmers in Wisconsin know that their immigrant workers aren’t replacing anybody. They’ve tried hard, without success, to find U.S.-born workers who want to shovel manure and milk cows every day starting at 4 a.m.

Tim Michels, the Republican candidate locked in a tight race with incumbent Democratic Gov. Tony Evers, has specifically promised not to allow undocumented immigrants in Wisconsin to get driver’s licenses. It’s a cruel and senseless policy that doesn’t stop the flow of immigration; it just makes immigrants’ lives more miserable.

Restoring driver’s licenses, which the Wisconsin Legislature took away from undocumented immigrants in 2007, would help about 22,000 workers reach employers who desperately need their help, according to the nonprofit research and advocacy group Kids Forward. In addition, it would mean the number of uninsured Wisconsin drivers would drop by an estimated 28,000, reducing premiums for already-insured drivers by $16 million. It would also improve family stability for 12,000 undocumented residents whose children were born here, and who would no longer have to worry that their parents might be snatched and deported for driving without a license, ripping their families apart.

When I’ve talked about my book to urban audiences, I’m often asked whether farmers who voted for Trump have realized that they’ve been voting against their own interests. When are rural voters going to wake up and vote for Democrats, urban voters want to know. After all, while rural Wisconsin put Trump over the top in 2016, and went even more heavily for Trump in 2020, the farmers in my book and the communities around them remain heavily reliant on the very undocumented immigrants Trump and other Republicans deride.

But it’s not that simple.

A lot of Wisconsin dairy farmers embraced Trump’s promise to renegotiate NAFTA, which he described as “a bad deal” for rural Americans. And they appreciated Trump’s promise to represent “the forgotten men and women of America.” They feel, with some justification, that neither political party has represented them very well, and that they are looked down on by people who live in cities. They hoped a political outsider would shake up the whole system and do something to address the very real crises in rural America. Some of the farmers in my book voted for Trump even though they didn’t like what he said about immigrants. They feel far away from national politics and are skeptical of liberals and have culturally conservative views — as do many of their Mexican workers.

While abuse and exploitation are byproducts of a system that is so reliant on a disempowered workforce — and those stories are part of my book, too — many farmers recognize the heroism of their workers, deeply admire their resilience and celebrate their success.

The unlikely friendships among two groups of people who have been pitted against each other in national political discourse show how people who are affected by the same economic and environmental catastrophes have in common. 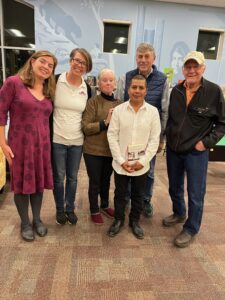 Last week, I traveled to western Wisconsin and Minnesota for a couple of panel discussions with several of the people who are in my book, including dairy farmers Stan Linder and John Rosenow, Rosenow’s employee Roberto Tecpile, and Shaun Duvall and Mercedes Falk of the Bridge/Puentes program. We spoke on a panel at UW Eau Claire and at the public library in Wabasha, Minnesota — both places surrounded by dairy farms and a growing Mexican population.

Tecpile explained to students at UW Eau Claire that, like them, he didn’t grow up speaking Spanish. He learned the language at age 14, when he went to work at a huge outdoor market in Mexico City. Before that he spoke Nahuatl, the Aztec language of his village in southern Mexico. He told how, when he was 8 years old, he lived in a wooden shack with a plastic tarp for a roof. One day a hail storm blew the roof off his house and pummeled his family as they huddled together. He promised his mother he would build her a better house, he said. After working in the U.S. for nearly half his life — 20 of his 43 years — he has built a solid, cement house for his parents and another one next door for his wife and children.

Stories like Roberto’s shed some light on what really drives immigrant workers to come north. Rosenow, for his part, will tell you neither his farm nor the dairy industry as a whole could survive without the hard work of Mexican laborers.

As I travel around in this intensely political season, talking about the relationships between rural Americans and Mexican workers, I see their stories, more and more, as an antidote to our divisive politics. The bond forged by these two groups of rural people is a reminder that people are more complicated than political labels. We can change. We can recognize the humanity of other people. We can realize that, fundamentally, we are all in the same boat.

That gives me a glimmer of hope that it’s possible to overcome the terrible, toxic politics  gripping our country.

We’re going to need a lot more of that very soon.

For the Houma People, Displacement Looms With Every Storm