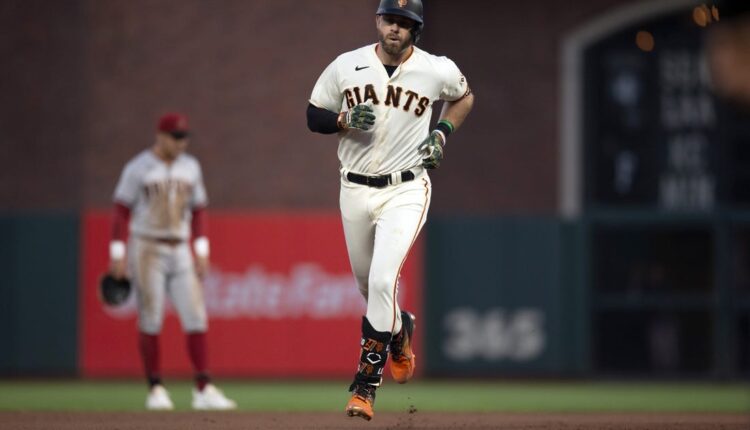 Bumgarner (6-12), who pitched on three championship teams for the Giants from 2010-14, was making just his third start in San Francisco since leaving the organization as a free agent in December of 2019.

Longoria’s homer ended a scoreless deadlock in the last of the fourth. His 10th of the season also scored JD Davis, who had doubled.

Acquired in a trade from Tampa Bay in December of 2017, Longoria and Bumgarner were two-year teammates in San Francisco.

The Giants padded their total run against Bumgarner on an RBI single by Austin Slater in the fifth, and a run-scoring double by Thairo Estrada and a two-RBI single by Joey Bart in a three-run sixth.

Bumgarner was pulled in the sixth inning, charged with six runs on eight hits in 5 2/3 innings. He walked two and struck out six.

The 11-year Giant, who had a pair of 18-win seasons for the organization, remains tied with Matt Cain for the most career victories in the 23-year history of Oracle Park with 60.

Christian Walker produced Arizona’s only run off Cobb with a solo home run in the sixth, his 28th of the season. According to Statcast, the blast measured 461 feet, his second longest of the season. He had a 467-footer earlier this year.

Cobb (4-6) ended a 12-game winless drought with three walks and five strikeouts in his six innings. The right-hander hadn’t won since May 17 at Colorado.

Bart had three hits for the Giants, who won their fourth straight to open a seven-game homestand. Longoria and Davis scored twice a piece, Davis as part of a two-hit night.

Jake McCarthy collected two singles for the Diamondbacks, who were coming off a 2-1 series win at Colorado.