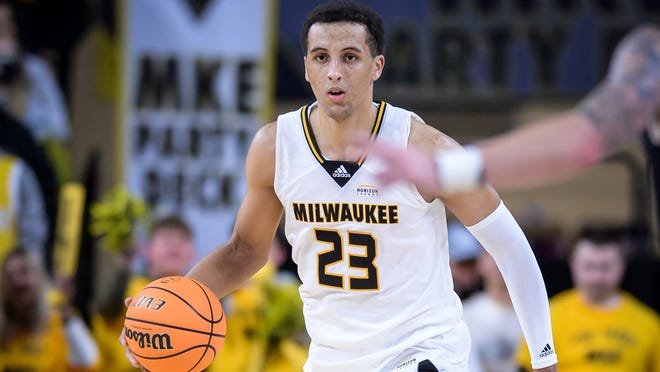 The champion Golden State Warriors are betting on the potential of Patrick Baldwin Jr., taking the UW-Milwaukee forward at No. 28 in the NBA draft on Thursday.

The 6-foot-10 and 220-pound Baldwin is the first Panthers player drafted since Von McDade was selected by the New Jersey Nets in the second round in 1991.

The Warriors, who defeated the Boston Celtics in the NBA Finals, already have strong Milwaukee connections with city natives Jordan Poole and Kevon Looney as well as former Marquette player Juan Toscano-Anderson on the roster.

Baldwin is hoping for some better luck than the last few years. He has been bothered by an ankle injury suffered in his senior year at Sussex Hamilton High School and it was one of the issues that plagued him in his lone season at UWM.

Baldwin only played in 11 games for the Panthers, averaging 12.1 points, 5.8 rebounds and 1.5 assists per game. He also missed several games after testing positive for COVID-19.

Pat Baldwin Sr. was fired as head coach after the Panthers stumbled through a 10-21 season.

“All of it is growing pains and I’m ready to take that next step and show the player I am,” Baldwin Jr. said at the combine in May.

The ankle was also likely cause for his poor measurements at the NBA combine in May. His standing vertical leap was 3.5 inches, the second-lowest mark of those tested.

Baldwin Jr. has pristine shooting mechanics and good size, making him an attractive prospect despite all his struggles in college.

The Warriors are wagering that he will be a better marksman than the 26.6% on three-pointers he shot at UWM, especially with better teammates and more spacing in the NBA. Golden State already boasts two of the greatest shooters in NBA history in Stephen Curry and Klay Thompson.

Cleveland Cavaliers select Ochai Agbaji, who was born in Milwaukee

Kansas star Ochai Agbaji, who was born in Milwaukee, was picked by the Cleveland Cavaliers at No. 14

Agbaji was a first-team All-American and was named Most Outstanding Player in the Final Four as the Jayhawks won the NCAA championship.

He averaged 18.8 points and shot 40.7% on three-pointers in his senior season.

Agbaji is the son of two former UWM players, Erica and Olofu Agbaji.

Former Milwaukee Riverside standout Alondes Williams did not get drafted but, according to the Athletic’s Shams Charania, the 6-foot-5 guard agreed to a two-way contract with the Brooklyn Nets.

Williams had a breakout fifth college season at Wake Forest, averaging 18.5 points, 6.4 rebounds and 5.2 assists per game and being named ACC player of the year.

That production was surprising after Williams spent two seasons at Triton Junior College in Illinois and then averaged just 17.5 minutes per game over two seasons at Oklahoma.

Former Milwaukee Washington star Michael Foster agreed to a free-agent deal with the Philadelphia 76ers, according to Charania.

The 6-9, 235-pound Foster played two seasons at Washington before finishing high school in Arizona. One of the top recruits in the 2021 class, Foster Eschewed College in favor of the G League Ignite, the NBA’s developmental team.

He averaged 15.7 points and 9.3 rebounds for the Ignite, but there were concerns among teams about what position Foster will play in the NBA.