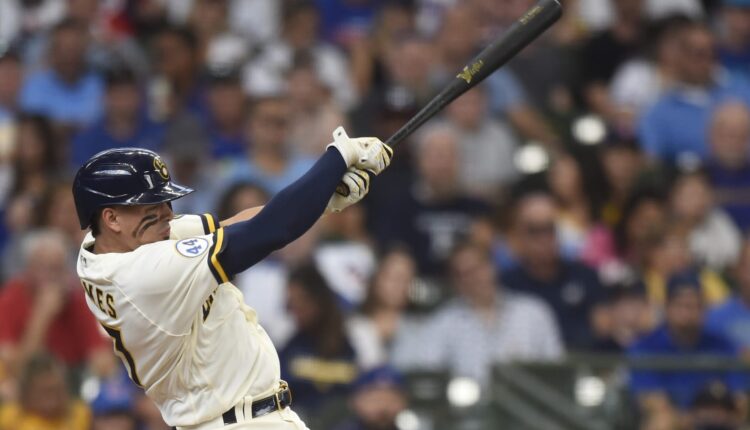 Willy Adames has become a fan favorite during his two years with the Milwaukee Brewers. The Brewers traded for Adames on May 22nd, 2021, a day now referred to by fans as Willy Adames Day.

When Adames arrived in Milwaukee in May of last year, the team was in a bit of a funk. The Brewers were 21-23 but went 74-44 after Adames arrived to finish with a record of 95-67. Many credit Adames’ arrival as the turning point in last season for the Brewers.

Although not as amazing success for the team has followed in 2022, they do still find themselves in first place at the All-Star break. Players like Adames have played a huge role in that, so let’s break down his season and give it a grade.

Considering that Adames missed a large chunk of time with an ankle injury, what he’s been able to produce so far this season has been impressive.

Adames has put together a season that sees his batting average, on-base percentage, and OPS splits sitting at .220/.294/.771. His average and OBP are down from where they were last year, but a lot of that has to do with Adames’ luck more than anything.

Adames has been hitting the ball hard, as he ranks in the 93rd percentile in barrel percentage in 2022. His average exit velocity is 89.4 MPH in 2022, compared to 89.5 MPH in 2021. Unfortunately, the luck just hasn’t been on Adames’ side so far this season.

While his success in terms of getting on base has been down, Adames has still produced plenty of power in the Brewers lineup. Despite missing 22 games this season, Adames has slugged 19 home runs, the most among all National League shortstops.

Even though he hasn’t been able to produce in other departments, Adames has still been able to be a productive bat in the first half because of his power. It’s not like Adames has been alone in not being able to consistently hit the ball, as it seems that most of the Milwaukee Brewers lineup has had similar issues so far this season.

Part of the reason why Adames may be struggling this season is because of his launch angle. He could be a case of launch angle giveth, launch angle taketh away.

As mentioned earlier, his exit velocity is about the same as it was last season. His launch angle, however, has increased to 19.8 degrees from 16.8 last season. Adames might be trying too hard to drive the ball with his swings this season and just needs to relax, but that is all my speculation.

We all saw what Adames is capable of doing as a hitter last season when he came in and completely turned the team’s season around. If Adames can capture the form that he had last season, along with his increased power this season, that would almost be like adding a big hitter at the trade deadline. The swing has been there for Adames this season, now we just need the luck to follow.