Green Bay Correctional Institution: The future of the facility 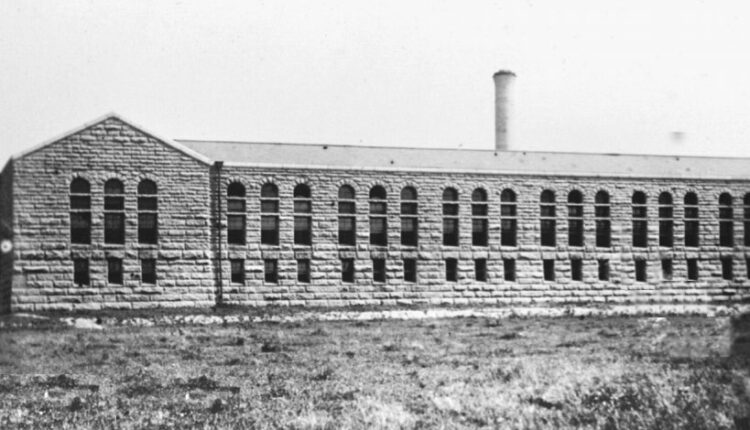 Construction began on the facility in 1898. Neville Public Museum of Brown County photo

Continued from a previous story: Click here to read Part I

A 188-acre parcel of the Kellogg farm, purchased the summer of 1897 in the town of Allouez, signaled the start of the prison facility – a project that captured the attention of the entire state.

The Oct 26 edition of the Green Bay Press-Gazette seemed to prognosticate what the purchased land was to become:

“The everywhere-known Kellogg farm site, peerless for location and contour and all-around beauty, out somehow and without fail to be preserved as the fine residence district of the future Green Bay. The time is coming and is not distant when, with multiplied means of transit, its present seeming remoteness from the city will not be thought of, and when beautiful homes adorned by and adorning spacious yards will dot the whole noble expanse.

“The building of the Wisconsin Reformatory will be inaugurated in earnest with the first coming of the spring, will be the signal for new building operations southward from the city, if conditions are made favorable, which will not cease until the Kellogg farm shall become the fine residence district of the Green Bay that is to be.”

In April 1898, James E. Heg, state board of control president, accepted the position as superintendent for the state reformatory and moved to Green Bay to begin his work, starting the construction of one of the facility’s wings.

Plans were also made to bring prisoners from the Waupun prison to work on the facility, and construction plans were put on display at Green Bay’s Hotel Christie for the public to view, as bids opened in Madison.

An old bicycle factory in Allouez was remodeled to house the inmates as they worked on the first wing.

Ground was broken on May 24 for the foundation, and WJ Thomas, of Green Bay, was named assistant superintendent.

Plans were made for a tunnel from the powerhouse to the reformatory to transfer prisoners between the two facilities.

On June 23, the cornerstone for the first wing was laid, with hundreds in attendance, including state officials, prominent people from all over the state and Governor Edward Scofield, who called it “an important event in the history of the state.”

“If I may be personal, I would like to say that the proposition to build a reformatory in this state where first offenders might have an opportunity of reforming and beginning life anew, has been very close to my heart since I was in the legislature in 1887,” Scofield said in his speech.

“Not many more serious problems than how to take care of the criminal classes or those criminally inclined, present themselves to the people of this country. The more the subject of criminology is studied, the more apparent it is that the old methods of arbitrarily restraining without classification or distinction, offenders of all classes against the laws of the state is woefully deficient in merit. It is too bad, but it is true, nevertheless, that the tendency of many state prisons and other institutions of the kind has been to foster and cultivate the criminal inclinations in inmates rather than to suppress them and reform the individual.”