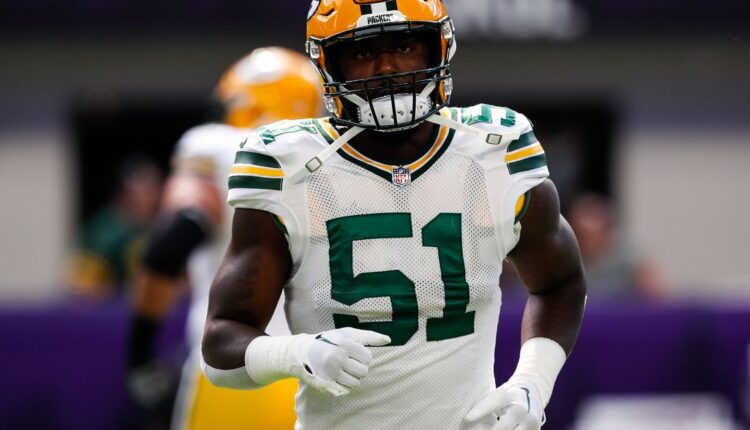 On Monday, head coach Matt LaFleur addressed the media following the Green Bay Packers’ 23-7 loss in their season opener against the Minnesota Vikings. One of the big questions of the day was the status of his injured players, as the Packers lost inside linebacker Krys Barnes (ankle), inside linebacker Quay Walker (shoulder), left guard Jon Runyan Jr. (concussion) and cornerback Keisean Nixon ( shoulder) during Week 1.

It was reported earlier today by NFL Network’s Tom Pelissero that Barnes, who was carted off the field while his right leg was in an air cast, was diagnosed with a high ankle sprain and a calf injury. In the words of Pelissero, “the initial hope is he could be back in a few weeks.”

On the topic of the health of the inside linebackers, LaFleur stated, “Obviously, [Barnes], it looked pretty significant. I think we avoided significant injury. So, that was some good news today. We’ll give Quay the week, but we’re hopeful that he’ll be back ready to roll.” De’Vondre Campbell and Walker started as the team’s two inside linebackers. Walker was then replaced by Barnes, who was later replaced by Isaiah McDuffie.

LaFleur did not seem pleased with the team’s punt protection, which he called “leaky” on Monday. Throughout the preseason and in Week 1 of the regular season, the punt protection line has been made up of inside linebackers and select outside linebackers. The starting team against the Vikings were outside linebackers Tipa Galeai, McDuffie, Barnes and Walker (left to right) at the tackle and guard positions on the unit. When Walker left the game, he was replaced by starter Campbell at right tackle. The team did not attempt a punt while both Barnes and Walker were out of action.

Barnes may even be a candidate for short-term injured reserve, depending on how Green Bay wants to handle their cap situation. If Barnes is placed on injured reserve, he can return to the team as soon as in a month. With that being said, the Packers have been working to release players off of injured reserve with injury settlements to clear cap space and still have receiver Osirus Mitchell, receiver Malik Taylor, kicker Gabe Brkic and safety Vernon Scott on the books on top of running back Kylin Hill, who is on the physically unable to perform list.

When asked about Runyan and Nixon, LaFleur said, “I don’t have a clear cut on what their availability is going to be like,” and mentioned that they will release an injury report on Wednesday. Runyan went down with a concussion when the Vikings’ defensive line met at quarterback Aaron Rodgers for a sack, a play in which Runyan and Rodgers banged helmets. Nixon, who saw playing time as a gunner and vice on special teams, went down on the team’s sole snap of dime defense in Week 1, the only defensive snap he saw in the game.

As a reminder, left tackle David Bakhtiari (knee), right tackle Elgton Jenkins (knee/pectoral), and receiver Allen Lazard (ankle) missed action in Week 1 due to injuries. According to Ryan Wood of the Green Bay Press-Gazette, it is assumed that at least Bakhtiari will miss Week 2’s game against the Bears.