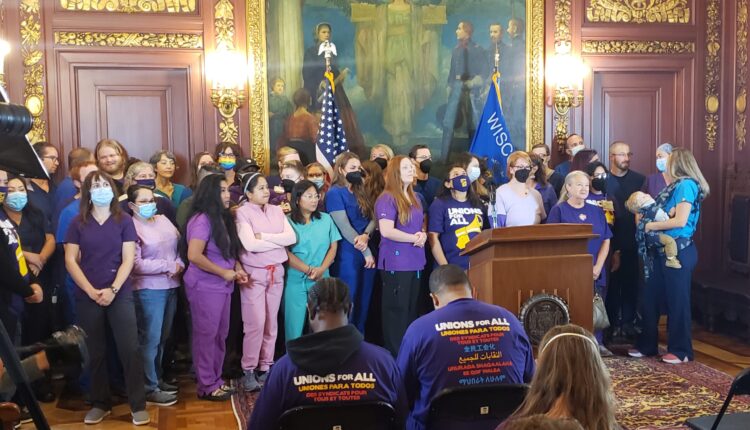 UW Health, nurses and the union seeking to represent them have agreed to a legal process to establish whether the hospital system can recognize and bargain with a union. Hospital and union representatives along with Gov. Tony Evers announced the deal Monday — averting a threatened three-day walkout by nurses that was to begin Tuesday morning.

At the same time, UW Health has agreed to more directly engage with nurses who have joined the union through its existing system for getting employee input on issues relating to patient care and other topics, according to CEO Alan Kaplan and a nurses’ union representative, Colin Gillis.

Evers, Gillis and Kaplan announced the agreement at a noon press conference in the state Capitol following five days of mediation including two days of talks at the executive residence hosted by the governor.

“My message was quite clear — that the people of Wisconsin expect everybody to work together for the best of everyone,” Evers said. “But it was just important to bring people together, and to have them communicate directly with each other. And it worked well. Both sides did a great job.”

The threatened strike was aimed at pressuring the UW Hospital and Clinics Authority — the corporate entity that operates the hospital system — to recognize the nurses’ union and to bargain with them in the face of what had been until Monday adamant refusal.

Since the union drive first went public in 2019, the hospital system’s administration took the position that state law wouldn’t allow them to engage with the union. A series of legal opinions subsequently disputed that legal interpretation.

The new agreement doesn’t automatically guarantee that the union, SEIU Healthcare Wisconsin, will be recognized. But it offers “a path to resolve the question once and for all”  whether that is possible under state law, said Kaplan.

And in the meantime, the agreement gives the nurses, through the union, a stronger voice in the existing UW Health “shared governance” program, according to Gillis. “We already are resetting our relationship with UW Health from one of dispute to one of a productive conversation,” he said.

Typically, the commission is notified by unions or employers in contract negotiations. With UW Health, the nurses and SEIU Healthcare Wisconsin, the agency contacted the parties first offering its services, “given the public interest and the consequences” in the event of a strike, said Peter Davis, the WERC staff attorney who conducted the mediation sessions.

This is a developing story and will be updated.