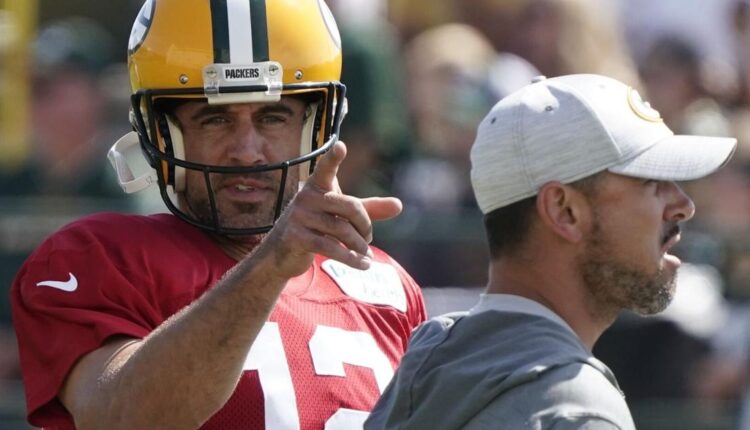 The Green Bay Packers have had one of the most reliable offenses for fantasy managers over the past decade-plus with Aaron Rodgers at quarterback.

Rodgers is still the man under center signing a contract extension this offseason, but there was an unexpected shakeup after All-Pro wide receiver Davante Adams was traded to the Raiders.

With Adams no longer around as Rodgers’ reliable go-to target, the question has arisen if the offense will shift to more of a run-first approach with an inexperienced receiving corps and Rodgers getting up in age.

Rodgers is someone I won’t be targeting in drafts for those reasons, but he’s a two-time defending NFL MVP and should still put up enough numbers to remain a top 12 fantasy quarterback.

The running game is expected to be leaned upon even more this season with a two-headed monster of Aaron Jones other AJ Dillon leading the way.

Jones excelled as a receiver out of the backfield last season as well as a runner and should see the majority of the touches, but Dillon’s role increased as the season went on to where he should see plenty of quality touches as well.

Jones is still the go-to fantasy option since his receiving ability boosts his upside in PPR leagues, but Dillon’s ability to break tackles and being a threat near the goal line make him a value pick in the middle rounds.

The receiving corps has 169 vacated targets left behind from Adams, and the incumbent veteran receiver who’s expected to see the most looks this season is Allen Lazard.

Lazard established himself as a reliable secondary option for Rodgers, but he’s in line for a career season as the primary target in what should still be an above-average passing attack.

It’s safe to assume Lazard won’t receive the amount of volume Adams did, which opens up opportunities for rookies Christian Watson other Romeo Doubs to make an immediate impact.

Watson has missed all of the training camp so far after a knee scope and likely won’t start until the second half of the season, but Doubs has been flashing with the first team in camp and could find himself as a starter right away if continues to build trust with Rodgers.

Watson and Doubs are worth targeting in the later rounds, as they should be able to beat out veterans Sammy Watkins other Randall Cobbbut Watkins could have value early on depending on how the rookies develop.

Rodgers has never targeted the tight end position heavily, but Robert Tonyan has established himself as a go-to red zone target and makes for a potential bounce back candidate.

Tonyan is coming off a torn ACL, but he’s expected back for Week 1 and is a decent dart throw as second tight end late in drafts as someone who could catch double-digit touchdowns.

the Packer’s defense should be a solid fantasy option with added reinforcements this offseason, but kicker Mason Crosby isn’t worth targeting since he isn’t as reliable as he once was.

The Packers schedule appears favorable, ranking 22nd in the league with a .478 strength of schedule rating, and their fantasy playoff schedule consists of the Rams in Week 15, the Dolphins in Week 16 and the Vikings in Week 17.

Sports betting is here in Louisiana. Get updates and analysis from our experts in your inbox.

Spencer ‘the Guru’ Urquhart (@spencertheguru) has been a fantasy football analyst since 2014, founding a community of over 6,000 followers on Instagram

Swine show judging results – West of the I