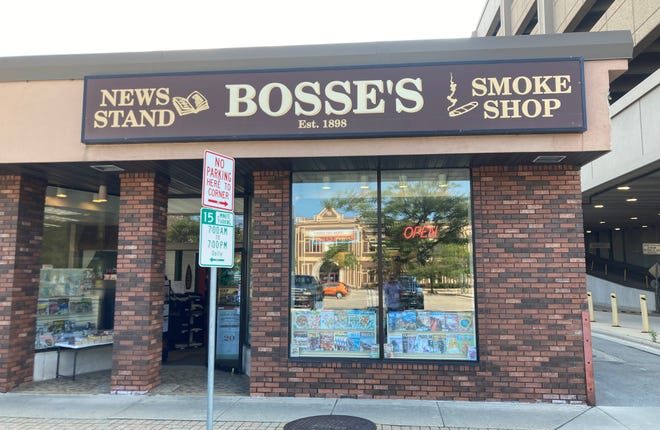 GREEN BAY – Bosse’s Newsstand & Tobacco Shop will mark its 125th year in business at its new home on De Pere’s east side.

The Mitchells spent September searching for a new location in the Green Bay area after the owner of their longtime space at 220 Cherry St. changed their redevelopment plans for the 0.36-acre site at the corner of Cherry and Adams streets.

The building’s owner, TAJ Enterprises LLC, originally planned to add five stories of apartments to the existing structure in the 200 block of Cherry Street, but engineers this summer said it would be more cost-effective to demolish the structure and replace it.

The new building would include 10,000 square feet of first floor commercial space, 57 apartments on five floors and a skywalk connection to the Cherry Street parking ramp adjacent to the site. But demolition meant Bosse’s would have to find a new home.

Bosse’s will remain open on Cherry Street until late November, and will open in its new location Dec. 1.

Art and Joe Bosse founded the eponymous newsstand and tobacco shop in 1898 on the corner of Cherry and Adams Streets.

Joe Bosse hired a 12-year-old Norman Liebert as a paperboy in 1922. Liebert took over the business in 1943 when Bosse died.

Steve Liebert, Norman’s son, started to help out at the store in the 1950s and he and his wife, Sandra, took over when Norman retired in the 1990s. He still owns the business today. Liebert’s daughter, Lisa, and her husband Steven Mitchell, represent the third generation of the family and continue to run the business today. Lisa Mitchell said her daughter, Kayla — the fourth generation — now works at Bosse’s, too.

Bosse’s remained a fixture on the corner of Cherry and Adams until 1981 when downtown redevelopment forced Bosse’s to relocate a half-block west, to 220 Cherry St. The original site became a parking lot for the Boston Store in Port Plaza Mall, according to Press – Gazette archives.

More:Downtown’s Lion’s Mouth Bookstore announces plans to relocate to a bigger location that ‘comes with a surprise’ | streetwise