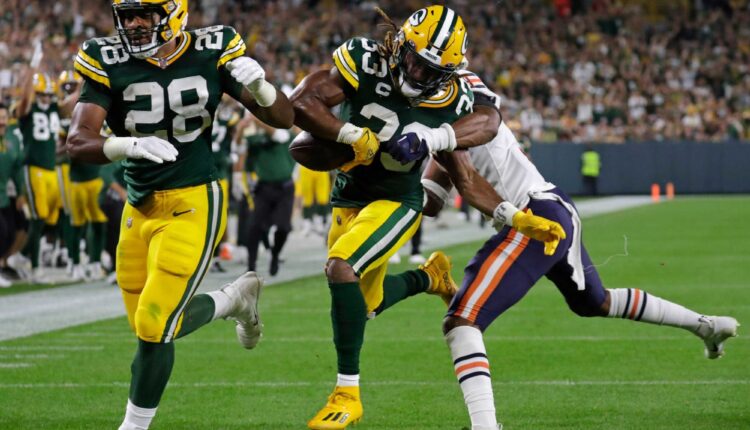 With the offseason here, it’s time to take a look back at the season that was for the Green Bay Packers. To do so, I will be going position by position through the roster, taking a look at what went right and what went wrong.

Next up are the running backs. Below you can stay up to date with each of my completed position groups.

What went right for the Packers’ running backs

– For Aaron Jones, it was a career year on the ground for him as he continued to be one of the more dynamic running backs in the NFL. He finished the season with a career-high 1,125 yards at 5.3 yards per rush, which was the sixth-best rate in football. Jones also finished tied for sixth in rushes of 10 or more yards, according to PFF ($$).

– In addition to his elusiveness, Jones is also a hard runner, especially for his size. He ranked 15th in average yards after contact and seventh in missed tackles forced.

– For an offense in need of help in the passing game, Jones provided that stability. He caught 82% of his passes, and his 72 targets were the second-most on the team. On top of that, his five receiving touchdowns were the third most.

– Overall, the Packers’ run game was the catalyst for their late-season surge on offense. In Green Bay’s last eight games, they were able to score at least 24 in six of them. In those games, Jones and AJ Dillon combined for 128 yards on average at just under five yards per attempt. On the flip side, in the two games where they failed to break 17, Jones and Dillon averaged only 2.9 yards per carry and combined to rush for just 112 yards.

– Patrick Taylor ended up solidifying himself as the third running back and really made his impact on special teams. He ended the year with 121 special teams snaps, the bulk of which came on the kick return unit or the punt coverage team. He also held up well as a pass-blocker on the few instances he had those opportunities.

What went wrong for the Packers’ running backs

– I’m sure, as you noticed, I didn’t have a specific comment above about AJ Dillon. While he had his moments, which included five games averaging over five yards per attempt, he seemed to lack the overall playmaking ability we saw in 2021. On the season, Dillon averaged a modest 4.2 yards per rush and had seven games where he averaged under four yards per rush. Unless things were blocked perfectly by the offensive line, he struggled to create his own opportunities. He even went from averaging 3.18 yards after contact to just 2.9.

– Both Jones and Dillon were reliable in the passing game, but neither was dynamic. Jones averaged just over six yards per catch, and Dillon just over seven, both of which ranked in the bottom half of the NFL among eligible running backs. In part, particularly with Jones, his usage didn’t necessarily give him many big-play opportunities, with most passes coming at or behind the line of scrimmage.

– The Packers struggled in the red zone, and a big reason why is that opposing defenses did their best to take away the Packers’ run game. It was tough sledding, and, at times, Matt LaFleur let the opponent dictate what plays the Packers ran. Both LaFleur and a more efficient passing game could have helped very much the Green Bay running backs inside the 20-yard line.

– As good as Jones is, fumbles were a major problem for him in 2022. I’m sure we all remember the one in the red zone against Detroit before halftime — another one that happened in a big moment — but his five on the season were the second-most among running backs this season.

– Jones also dealt with injuries throughout the season that, at times, had him on a snap count and took away the Packers’ one consistent playmaker on offense.