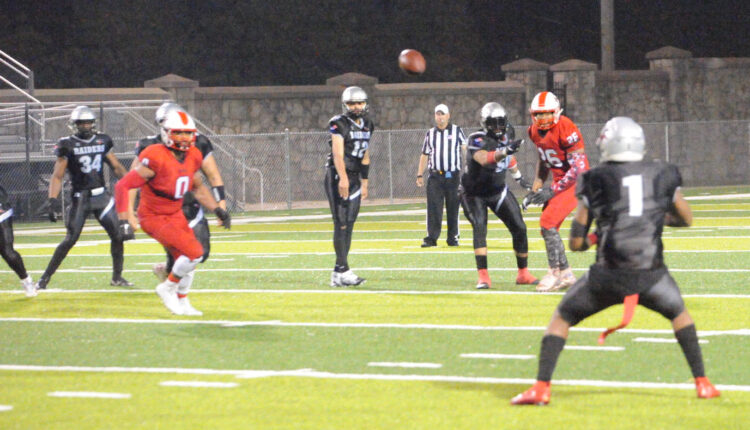 RACINE – OK, it wasn’t an actual Hail Mary pass and catch for the Racine Raiders. By definition, the Hail Mary is a play where the quarterback desperately heaves the football up in the air to the end zone, most times 40 or more yards, with hopes his teammate will out-jump a defender to make an impossible catch with no time left on the clock.

It often happens when a team is losing and has no other choice but to throw where it will almost certainly result in a batted ball incompletion or interception.

It’s not something you draw up; and Racine Raiders head coach Wilbert Kennedy didn’t draw this one up, either, Saturday night toward the end of the team’s MidStates Football League home opener against the Wisconsin Hitmen.

The desperation element was there. The Raiders trailed 34-22 with less than 5 minutes to play, and were down 34-29 with around 1 minute to play. None of that mattered to quarterback Mitch Farr and wide receiver Joe Garcia, a talented tandem that’s becoming a go-to one-two punch for the Raiders.

Farr, who was sacked five times on the night and was running for his life at times, avoided pressure from his left and rolled out, allowing Garcia to get to the end zone. The 6-foot-4 wideout had a much smaller defender on him, so Farr lofted a perfect spiral high in the air, as the seconds ticked near the 1-minute mark.

What happened next is still being debated online, at the barbershops and in Raider football circles.

Garcia leaped to grab the football, but so did the Hitmen cornerback. They both caught the ball, for simultaneous possession, as Garcia got both feet down with control of the football. The defender wrestled the ball away from Garcia roughly one second later, but the damage was done.

Simultaneous possession goes in favor of the offensive player, so Garcia was awarded the touchdown, giving the Raiders a thrilling and dramatic, yet controversial, 35-34 victory. The Hitmen were able to drive down the field in the final minute all the way to the Raiders’ 23-yard line, but a game-winning field goal attempt was blocked.

Racine escaped with the win to improve to 4-1 overall and 1-1 in the MSFL.

After the game, Garcia did his best to explain the play that caused an uproar in the stands, among players on the field and after the game. The Hitmen cornerback, who was at first awarded with an interception for his heads-up play before the call was reversed to a touchdown, gave the referees an earful on the sideline minutes after the game around 11:15 pm, more than four hours after kickoff in Saturday’s marathon.

“We knew we had to score, and no field goal was needed,” Garcia said. “Right before that last play, I was out and they had no clue who was on the field. I just ran a go route. Coach told me to run fast and hard. The play was for me to do a quick out, and catch it and get out of bounds. But Mitchell had faith in me with the 50-50 ball, going downfield, and he just let it fly and let me make it happen… From a few angles, it looked like an interception, but it was a touchdown.”

Garcia finished with five catches for 110 yards and three touchdowns. Farr wasn’t super efficient, completing 19 of 40, but he bounced back in a major way after last week’s five-interception aberration.

As clock counts down, touchdowns add up

Farr was as clutch as ever in the final five minutes, tossing two touchdowns that won the game, and he finished with 272 yards passing and five touchdowns – despite being under extreme duress most of the game and getting sacked eight times.

“Ricky Neal (former NFL prospect) and a few of their guys that played for us last year were really tough on their defensive line,” Garcia said. “We stuck to our game plan, and we found a way to win.”

Farr trusts his guys, and he’s a gunslinger. His connections with Jordan Payne, who scored two touchdowns in the fourth quarter, and Garcia, who also totaled two in the fourth, are uncanny. They have an unseen chemistry and know each other’s timing.

Both Garcia and Farr are from Racine, and they get along well off the field. They’ve known each other since they were kids.

“On the last touchdown, I know Joe has a fade, where he flies down the sideline,” Farr said. “We had been running the same concepts knew, so I the safety wasn’t going to be able to make it over the top.”

Farr said he makes it a point to connect with as many receivers as possible. He completed a pass to each and every Raiders receiver Saturday night.

“They have a phenomenal defensive line, probably the best in the league,” Farr added. “We trusted our receivers to go get it done for us.”

Hitmen do-everything star Shaq Russell bolted for an 87-yard kickoff return for a touchdown and finished with 160 kickoff return yards, setting up the Hitmen with short fields two other times for quick scoring drives.

Russell’s big plays and four touchdown passes from quarterback Justin Billiot had the Raiders on their heels for most of the game. Wisconsin led, 19-9, early in the fourth quarter when the Raiders recovered a fumble around midfield.

But then Farr heated up, trading touchdown passes with Billiot until the 10:18 mark when the hitmen’s 12-yard touchdown catch made it 34-22 for the visitors. Payne answered by catching a short out route 10 yards downfield, turning it up and running over a Hitmen defender, dragging him into the end zone to cut it to 34-29 with 4:49 to play.

Then, the Raiders finally clamped down and caused Billiot fits, knocking down passes and forcing a punt to set up the game-winning drive. After Garcia’s Hail Mary score, the Hitmen got all the way down to the Raiders’ 23 with 48 seconds on the clock, but the stout defense forced a fourth down. The field goal was slightly low and blocked by a Raiders defender, and that was the ball game.

The players and crowd rejoiced in jubilation, and Racine ran out the clock to win it.

National championships are always the goal. But the Raiders haven’t won the league since 2019. Farr, who said he’ll be “hurting tomorrow,” believes this 2022 incarnation can get back to the heights everyone expects.

His newborn son has changed his sleeping habits and turned his world upside-down – in a good way – of late, but he’s happy he can still go out there and win games for Racine’s hometown team.

“I think we got what it takes to do what we did in ’19 when we won the league,” Farr said. “I had a rough week last week and wanted to bounce back, and I did. I didn’t want to blame it on my son and not getting enough sleep. He will be a month old on the 13th (of June).”

In case you missed the game, enjoy one more highlight reel. And then, make it a point to come out to the next Raiders home game at Historic Horlick Field.

The Racine County Eye, which includes the Kenosha Lens, is your source for local news that serves our diverse communities. Subscribe today to stay up-to-date with local sports, business, and more.

Subscribe to the Wisco Huddle to stay up-to-date with your favorite Wisconsin high school sports.