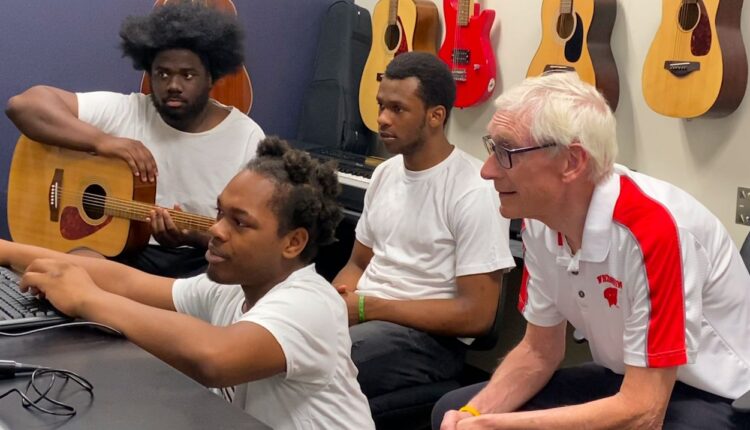 KENOSHA, Wis. — For about the last five years, Rodney Sa’ron Spears has been going to the Boys and Girls club in Kenosha.

What You Need To Know

“When we got up here, we saw this empty room, we were just joking around saying, ‘Hey maybe you make it into a studio,’ and when they did, I was locked in here,” Spears said. “Because for me personally, I have a relationship with music, and as soon as I found out the Boys and Girls Club did too, I wanted to get integrated with it.”

And in the years since, he’s recorded his own music. He has also helped countless teenagers record and produce songs, beats and raps.

“I’ll just kind of be their lamb, whatever they want me to do, I’ll do on the computer, or come in here and record,” Spears said. “They’ll find a beat and be like, can you make a song to this? Like, oh! OK! We’ll load it up, I’ll have them in here so I can teach them how to as we go on, but we have fun because I don’t want it to be a bad learning process.”

That’s also what Christian Gregory, a volunteer with the Boys and Girls Club, spends his time doing.

“It’s really about teaching the next generation music,” Gregory said. “There are a lot of talented kids here, and that what I try to tell all these kids. They’re talented. I’m just grateful for the opportunity to be able to teach them.”

On Wednesday, Governor Tony Evers visited the Boys and Girls Club for a tour, and had a chance to talk with Spears and Gregory about the state-of-the-art music studio, and how it has helped them in their own lives.

Spears said the organization plays a big role in keeping kids safe and off the streets.

“Some of the people from the ‘wrong crowds’ would come here, but they wouldn’t really tell anybody but then they’d change,” Spears said. “Then they’d tell their friends. So we used to get 90-100 people up here just at once just because people who knew big crowds. They were like, ‘Oh, maybe the Boys and Girls Club ain’t so bad.’ Then they’d get their friends over.”

“If young people are given the chance to have opportunities like this, they’re going to be productive, and not doing things that harm the community,” Evers said.

And even though they’ve graduated and entered adulthood, Spears and Gregory are looking forward to paying it forward, helping today’s teenagers find purpose through music.

Will the US Overcome Its Covid Complacency Even as the Threat Returns?