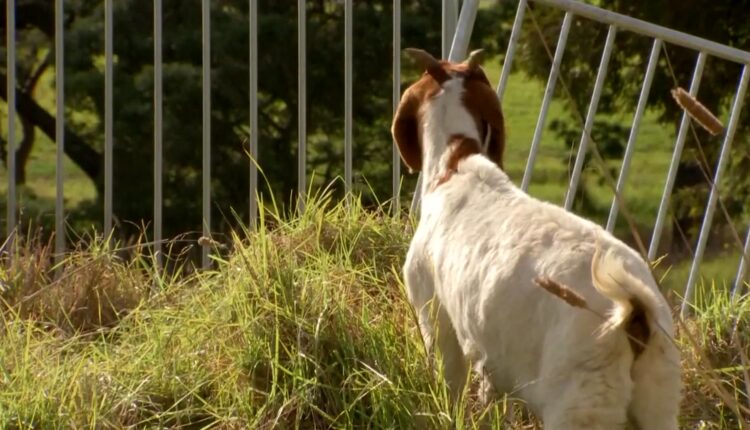 MADISON Wis. (CBS 58) — In an attempt to weed out invasive species, researchers at UW-Madison are turning to a natural alternative – goats.

American Family Insurance is teaming up with the University of Wisconsin-Madison in part of an innovative study to explore methods to remove invasive species by using goats and other methods.

In a fenced-in woody area on AmFam property, 22 goats eat to eliminate invasive species which researchers say has been an issue for a long time.

“It’s really bad almost 99% of oak woodlands have been removed or degraded and the ones that are present are heavily invested with invasive woody shrubs,” said Dr. Mark Renz, Agronomy Specialist, UW-Madison professor who is assisting in the study.

Invasive species are non-native plants that can or have the potential to cause environmental or economic harm. But for these goats – they don’t see woody plants as an enemy.

“They’ll eat anything from buckhorn, honeysuckle, poison ivy,” said Casey Olsen, facilities program analyst at American Family Insurance. “They are not affected by it and they’ll eat whatever they can reach.”

UW-Madison Ph.D. student Stefania Cartoni-Casamitjana is leading the study and said the use of goats has grown in popularity over the years.

“Parks and other land managers are also using goats and it’s something that is very attractive for people,” Cartoni-Casamitjana said. “Who doesn’t want to be around goats?”

These four-legged animals can also save time and energy compared to humans or machinery working on steep slopes to remove invasive plants, Renz said.

“If anyone has tried to cut down a shrub or a tree they know it’s a lot of work,” said Renz. “We are trying to evaluate what works best and what cost associated is so we can give the best recommendations.”

The study includes other control methods and test sites for removing the invasive species, which will help examine the economic and environmental impacts of each of the control methods.