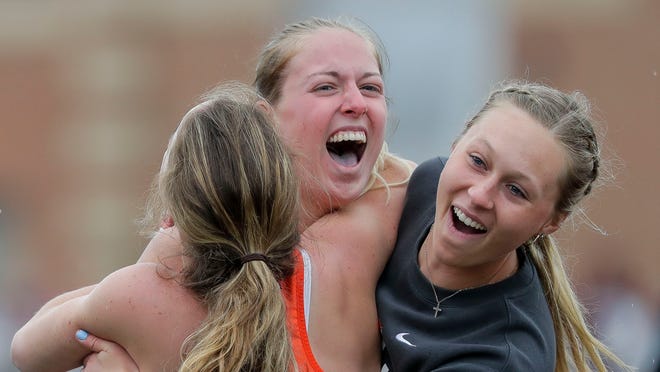 KIMBERLY – The Papermakers couldn’t find the back of the net against the sixth-seeded Warhawks defense.

Third-seeded Kimberly, which trailed 2-0 at halftime, got 15 saves from goalie Kylie Konrad.

MILWAUKEE – The Dashers got goals from Sofia Miranda, Bridget Parks and Jane Martin in the first helped in their win over the Rockets.

Neenah’s goal came in the 73rd minute of the match.

GREEN BAY – Ella Siegle scored three goals in the first half to lead the Trojans to the win over the Owls.

Maddie Marchant and Brooklyn VanGheem added goals for Green Bay Southwest in the second half.

Alex Siduzinski had two assists for Green Bay Southwest, while Mallory Kerhin and Joelle Proski each had one assist.

Zoe Hettiger scored for Slinger in the 79th minute.

DE PERE – The Red Raiders got a goal from Ellie Mangold in the first half and made it stand up in the win over the Phantoms.

Ella Sasse had 11 saves for Pulaski.

PLYMOUTH – The Panthers got four goals and three assists from Hailey Batzner in the win over the Irish.

Plymouth, which led 4-0 at halftime, also got two goals from Melina Knowles and one each from Emma Adema, Cassie Pilling, Sarah Welsch and Ava Stroessner.

Knowles and Hannah Downs both had two assists.

Addie Reimer had three saves in goal for Plymouth.

ASHLAND – The Oredockers, who led 3-0 after one half, got goals from Sienna Mika, Haillee Wilson, Hannah Bocher, Lilly Nye and Emily Nye in the win over the Falcons.

SHEBOYGAN – Sheboygan Lutheran/Christian got a goal from Taylor Batt in the 21st minute and Maria Zylstra in the 78th minute to defeat the Zephyrs and win the regional title.

Greta Norville had six saves for St. Mary Catholic, which finishes the season with an 8-6-4 record.

FOND DU LAC – Mackenzie Rockow scored in the second half at 71:46 to lift the Vikings to the regional championship.

After a corner kick by Rosalie Hilbert, the ball pinballed around until it came to Rockow at the upper right side of the penalty box, and Rockow hit a low hard shot just inside the far left post.

Lydia Bernhard had nine saves in goal for WLA.

“This was a very exciting win for our players,” WLA coach David Haag said. “Oostburg and WLA are two evenly matched teams. Both teams played with intensity and physically, so it was a battle for 80 minutes. Our girls just kept defending and battling. Lydia made some really nice saves and Mackenzie pulled it out for us at the end. I’m very happy for the team and their accomplishment.”

WISCONSIN RAPIDS – Sarah Shaw scored five goals and had two assists to lead the Royals to the regional final win.

Morgan Reichl was in goal for Assumption and made eight saves.

KOHLER – Taylor Schad scored in the first minute and finished with three goals to lead the Raiders to the regional final win.

Bryannah Remy made five saves in goal for the Raiders, who also got strong games from Lydia Vander Meer, Elisheba Sippel and Grace McDole.

#1 Baldwin-Woodville vs. #4 New Holstein, approximately 10 am