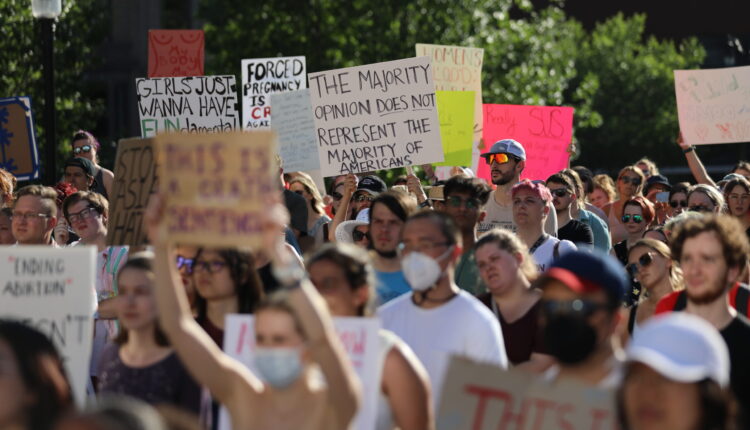 Protesters gather outside the Wisconsin State Capitol on June 24, 2022 in Madison, Wis., during a rally and march for abortion access. Earlier that day the US Supreme Court overturned Roe. v. Wade, ending the federal constitutional right to an abortion. Wisconsin physicians have since operated under a near-total abortion ban from the 1800s. (Coburn Dukehart / Wisconsin Watch)

Since the US Supreme Court revoked the federal constitutional right to an abortion in June, Wisconsin physicians have operated under a near-total abortion ban from the 1800s. Physicians call the language articulating the ban’s narrow exceptions vague. That makes the question of what they should do in certain situations open to interpretation.

Amid the uncertainty, Wisconsin Watch spoke to experts to answer your questions about abortion and reproductive rights in the state.

Still have questions? Email us at [email protected] or text MKE to 73224, enter your ZIP code and request to connect with a reporter.

I want to terminate my pregnancy. How can I legally get an abortion?

While Wisconsin clinics have halted elective abortions since the Supreme Court ruling, abortions remain legal in neighboring states, including Minnesota, Iowa and Illinois.

Some states have attempted to ban leaving the state for an abortion, but “Wisconsin has no such law,” said Diane Welsh, who specializes in health law at the Madison-based firm Pines Bach.

In Illinois, abortion remains legal until the fetus reaches “viability,” the time at which an attending physician determines there is a “significant likelihood of a fetus’ sustained survival outside the uterus without the application of extraordinary medical measures.” That usually happens around 24 weeks of pregnancy — determined by counting from the first day of the pregnant person’s last period. But viability can differ between pregnancies.

Illinois clinics are not legally required to contact a parent or legal guardian for those under 18. Illinois also does not require patients to endure a waiting period, view an ultrasound or receive information from the state, as some other states do.

In Minnesota, the Supreme Court recognizes a state constitutional right to abortion, and in July, a judge struck down certain restrictions, including a 24-hour waiting period and a requirement that parents or a legal guardian of a minor seeking an abortion be notified.

Like in Illinois, abortion in Minnesota is legal until viability.

Abortion access in Iowa remains legal, although that could change. Iowa currently bans abortion after 20 weeks of pregnancy. That’s 22 weeks after the last menstrual period. This deadline has exceptions to protect the health of a pregnant person or save the person’s life.

Iowa requires people seeking an abortion to sit through a counseling session and wait at least a day before the procedure. The state requires parental or guardian notification for patients aged 17 years or younger.

The organization also offers pre- and post-abortion care. For instance, if you don’t know the exact date of your last menstrual period, you can schedule a free “pregnancy assessment and ultrasound dating” at clinics in Madison, Milwaukee and Sheboygan.

If you need help with funding, here are a few of your options:

If I return to Wisconsin following an out-of-state abortion and experience complications, can I get in trouble while going for help at the ER? What should I tell them?

“From a purely medical standpoint, I would want my patient to be able to be entirely honest so I could offer her the best possible management for her concerns in the most holistic manner, addressing not only her physical concerns but also emotional, social, and whatever else these challenging situations involve,” said Dr. Kristin Lyerly, a Green Bay obstetrician and gynecologist.

Still, patients could become involved in an investigation of an abortion provider, which could include collection of evidence like cell phones, Lyerly said.

Patients should be careful about sharing information, said Lyerly, who recommends that recipients of abortion care outside of Wisconsin call the clinic where they received care to seek guidance. Many clinics offer 24-hour hotlines for issues that may arise. If the complications worsen quickly, though, call 911 or show up to the nearest emergency room.

I’m pregnant and have a life-threatening condition. What should I do?

The lone exception in Wisconsin’s abortion ban is for life-saving “therapeutic abortions.” The law says the procedure must be deemed necessary “or is advised by 2 other physicians as necessary to save the life of the mother.” There are myriad circumstances in which an abortion might be necessary to prevent disease or death, OB-GYNs say.

Professional associations, health systems and hospitals — even physicians themselves — are developing policies to guide pregnancy-related care, as Wisconsin Watch recently reported. But whatever advice they provide will not be binding — nor universally applicable. The circumstances under which a person will receive an abortion in Wisconsin will ultimately depend on the health system or hospital — and, when it comes down to it, individual doctors.

That means medical interventions during a pregnancy could vary widely. The uncertainty may cause delays in intervention, especially in rural areas.

If you have a life-threatening condition and you’re pregnant, immediately seek a doctor’s guidance.

Patients who feel that a physician or health system isn’t promptly addressing their needs should “seek a second opinion, from another provider — including a provider in a neighboring state,” Welsh said.

Can I still buy emergency contraception like the morning-after pill?

yes Emergency contraception—often called the morning-after pill—remains legal and available for purchase in Wisconsin. The most well-known brand is called Plan B, but Aftera, Take Action, and My Way are all available without a prescription. Emergency contraception does not function as an abortion — it works by preventing or delaying ovulation to prevent fertilization within 72 hours of unprotected sex. 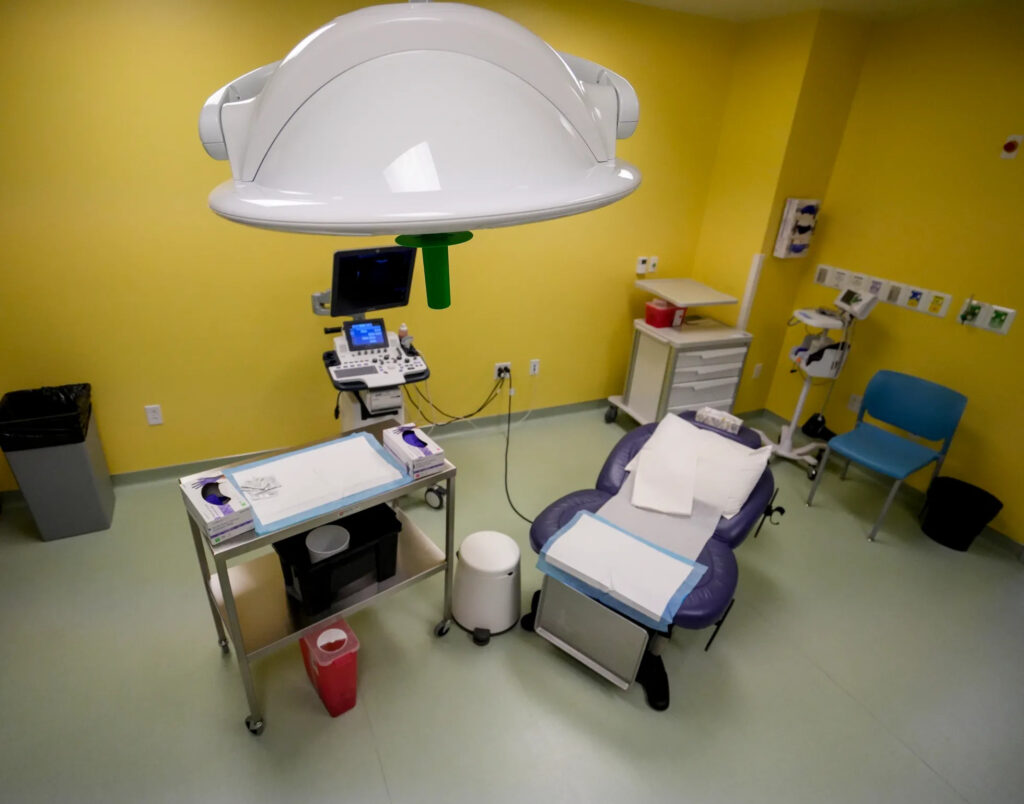 This is one of the rooms where abortions were administered at Planned Parenthood in Milwaukee. The US Supreme Court revoked the federal constitutional right to abortion on June 24, 2022. Wisconsin physicians have since operated under a near-total abortion ban, requiring residents seeking a legal abortion to travel out of state. Photo taken July 14, 2022. (Ebony Cox / Milwaukee Journal Sentinel)

Planned Parenthood offers emergency prescription medication to walk-ins during their business hours. That requires a brief visit with a health care provider on site. Wisconsin pharmacies continue to provide emergency contraception, although some limit how many one person may buy at once. Health care providers advise against stockpiling them anyway, since they expire after about a year. The pill typically costs $40-$50.

Should I be concerned about my data privacy when searching for or seeking abortion?

yes Almost immediately after the Supreme Court overturned Roe v. Wade, some people who use period tracking apps like Clue and Flo started deleting them, fearful that their data could be used against them.

You should be concerned about data privacy in general, especially when seeking an abortion, said Dorothea Salo, a professor who specializes in information security and privacy at the Information School of the University of Wisconsin-Madison.

Be especially wary of most commercial search engines, she said.

“We know they collect and retain search data, including search queries; we know they associate that data with individual searchers; we know they share, aggregate and sell it all over creation; we know that law enforcement agencies access it,” said Salo, who uses DuckDuckGo.

As far as browsers go, Brave is more privacy-centered than Google Chrome.

If this sounds overwhelming, Salo recommends starting with a step-by-step digital security guide, like this one from the Digital Defense Fund.

Can I legally help my friend travel across state lines to get an abortion?

yes Just as traveling across state lines for an abortion remains legal in Wisconsin, so does helping someone do so.

Can I legally get abortion pills in the mail?

No. Wisconsinite must travel to another state to legally receive abortion pills in the mail.

Wisconsin law bars anyone other than a physician to administer abortion medication, and only after they perform a physical examination and share certain information. While the law doesn’t make recipients of mailed abortion pills subject to criminal prosecution, the person shipping the pills could face charges, Welsh said.

One legal workaround: picking up pills in another state. Certain Planned Parenthood locations outside of Wisconsin offer telehealth visits for the abortion pill. The closest is in Illinois. Accessing the abortion pill after your telehealth visit would require picking up a prescription while visiting that state or having them mailed to an address inside of that state.

There’s a pregnancy clinic in my neighborhood. Will they help me?

Pregnancy clinics, also known as “crisis pregnancy centers” or CPCs, typically present themselves as health clinics, but they primarily aim to dissuade pregnant people from accessing abortions — including by spreading misinformation, research shows. Often religiously affiliated, some centers provide pregnancy tests, testing for sexually transmitted infections and ultrasounds, “however, the images are frequently non-diagnostic and often obtained by untrained, unlicensed staff,” according to a review of academic literature on CPCs published by the International Journal of Women’s Health.

“These facilities engage in purposefully manipulative and deceptive practices that spread misinformation on sexual health and abortion,” the review found. “CPCs have also been shown to delay access to medically legitimate prenatal and abortion care, which negatively impacts maternal health.”

CPCs may be located close to reputable abortion clinics and designed like a normal physician’s office. These unregulated centers are not medical establishments, so they are not bound by any privacy laws, and have been shown to collect patients’ personal data.

The Crisis Pregnancy Center Map, a project of two professors at the University of Georgia College of Public Health, tracks 58 known centers in Wisconsin.

Disclosure: Pines Bach provides pro bono legal representation to the Wisconsin Center for Investigative Journalism, but it did not provide legal services related to or participate in the writing or editing of this report. The nonprofit Wisconsin Watch (www.WisconsinWatch.org) collaborates with WPR, PBS Wisconsin, other news media and the University of Wisconsin-Madison School of Journalism and Mass Communication. All works created, published, posted or disseminated by Wisconsin Watch do not necessarily reflect the views or opinions of UW-Madison or any of its affiliates.

Editorial: Rush to EVs has its dangers | Editorial