Here’s what you need to know about new workplace protections for pregnant, nursing workers 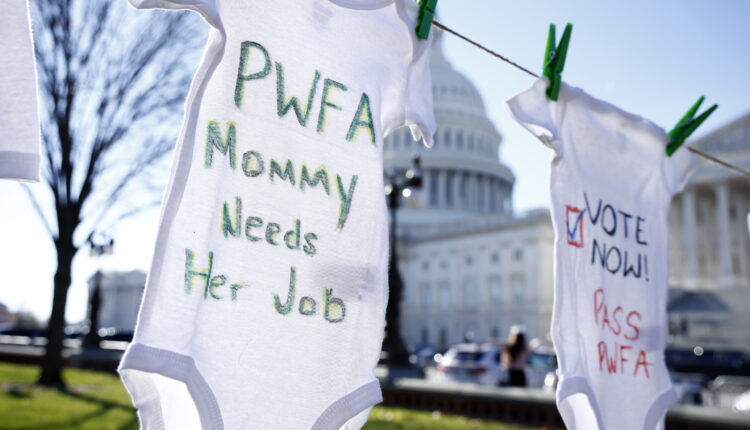 The $1.7 trillion federal spending bill President Joe Biden signed at the end of December ushers in expanded protections for workers who are pregnant or nursing.

Proponents of the Pregnant Workers Fairness Act and the PUMP for Nursing Mothers Act — both included as amendments to the spending bill — say the measures clarify rights for these workers, who weren’t properly covered under existing laws.

Sens. Bob Casey (D-PA) and Bill Cassidy (R-LA) co-sponsored the measure strengthening pregnant workers’ rights. The law, which goes into effect in June, requires a business with 15 or more employees to make reasonable accommodations for pregnant workers unless doing so puts an undue hardship on the employer. That means a pregnant worker can’t automatically be denied additional bathroom breaks, be required to lift heavy items or be denied the opportunity to sit while working or other such accommodations. And it means an employer can’t discriminate against a pregnant job applicant who needs such accommodations.

Supporters of the amendment said that neither the existing Pregnancy Discrimination Act (an amendment to the Civil Rights Act) nor the Americans with Disabilities Act provided the accommodations that pregnant workers needed for a healthy pregnancy. Because those measures didn’t offer enough protections, 30 states enacted their own laws for pregnant workers, according to Bloomberg Law.

The Supreme Court’s standard for assessing pregnant workers’ rights and their needs for accommodations made the bill necessary, said Dina Bakst, co-founder of A Better Balance, a nonprofit focused on litigation, legislative advocacy and education on labor issues.

Bakst, in testimony to Congress in favor of the bill, said the Court’s 2015 decision in Young v. UPS “laid out an overly complicated, burdensome standard requiring pregnant workers to jump through legal hoops and prove discrimination” to get accommodations. The court held that pregnant workers could only have the same accommodations as workers who were limited by injury or disability.

Bakst also testified that a 2019 report by her organization found that as a result of the court’s decision, pregnant workers lost 29 out of 43 pregnancy accommodation cases in lower courts. Elizabeth Gedmark, vice president of A Better Balance, told States Newsroom, said that doesn’t capture the number of workers who never made it to court because of the stress and financial issues related to taking legal action.

“You shouldn’t have to look around and find another coworker or jump through all these hoops or prove that you are disabled under the ADA,” she said. “You should just simply be able to have that reasonable accommodation when you need it, especially to prevent problems and health issues before they even start.”

As recently as August, the United States Court of Appeals for the Seventh Circuit decided that Wal-Mart did not violate the law when it said pregnant workers were not included in a policy at a distribution center in Wisconsin that allowed workers injured on the job to be assigned work that would not aggravate their injuries, Bloomberg reported. The court said Wal-Mart did not need to provide any justification for why the policy was limited to only those workers, the argument made by the Equal Employment Opportunity Commission which brought the suit on behalf of female workers.

Jocelyn Frye, president of the National Partnership for Women & Families said the passage of the Pregnant Workers Fairness Act was a win for gender and racial equity. She added, “For far too long, pregnant workers have gone without the critical protections many people need to maintain a healthy pregnancy: protections like the ability to take bathroom breaks during a shift, sit down while working a cash register, or pause to take a drink of water to stay hydrated.”

The legislation, which passed with bipartisan support, was also endorsed by the U.S. Chamber of Commerce, Retail Industry Leaders Association, Society for Human Resource Management and National Retail Federation.

Vania Leveille, senior legislative counsel at the ACLU also celebrated the passage of the PUMP Act for Nursing Mothers, sponsored by U.S. Sens. Jeff Merkley (D-OR) and Lisa Murkowski (R-AK), which was also included in the spending bill.

The measure was needed, advocates said, because the Affordable Care Act, which required workers be given break time to pump breast milk and the privacy to do so, did not cover employees considered exempt from overtime. That left out 9 million women workers of childbearing age, according to a report released in 2019 from the Center for WorkLife Law, out of the University of California.

The PUMP for Nursing Mothers Act is supposed to fill those coverage gaps, according to the ACLU and Center for WorkLife Law. It also extends the time breastfeeding parents can benefit from these accommodations from one year to two years.

“The PUMP for Nursing Mothers Act is so transformational because it expands the coverage of federal laws that provide break time, and space that is not in the bathroom and has to be hygienic for breastfeeding workers,” Gedmark said.

Businesses with 50 or more employees must provide the time and space for pumping immediately, but the ability to bring a complaint against an employer and take legal action doesn’t begin until April.

Transportation workers are treated differently under the PUMP Act, with bus drivers for long-distance bus companies and some railroad workers having a three-year delay in the bill applying to them. There is also an exemption for air carriers and a difference in how the law affects some railroad workers. Employers do not have to provide breaks for railroad workers in train crews if it would be too expensive for the employer and if it created unsafe conditions for another rail worker who has the right of way, the amendment’s language explains.