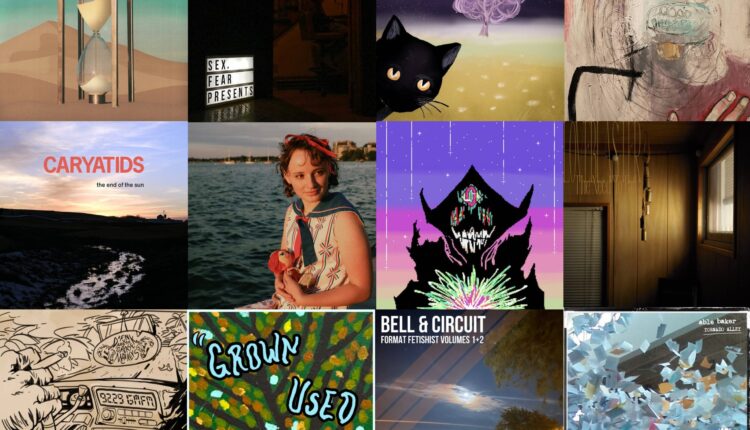 Photo: A 3×4 grid displays the cover art for the tracks that appear on this list.

The first installation of a three-part series chronicling our favorite tracks from local artists.

Kindness wasn’t always easy to come by in 2022, but when we needed comfort, Madison’s local musicians made sure we were covered. Across a three-part series, we will be featuring our favorite tracks from Madison artists, making sure to minimize overlap between our songs and albums selections. Madison’s music community is exponentially more varied than it often gets credit for, though its existing infrastructure needs major improvements to actually work towards meaningful equity.

Across around 36 selections, and split into three distinct parts, our picks reflect Madison’s depth. Emergent rap artists, veteran folk songwriters, experimental acts, punk projects, and more all find some amount of representation. Serenity, urgency, tragedy, and raucous fun are allowed to coexist comfortably here, while we reflect on what each track has to offer and how they impacted us as listeners. Some of these songs came from an album or EP, and some were released as standalone singles. All of them made an impact.

A few of this year’s selections were also included on the To Grow A Garden compilation. They were selected for both the compilation and these lists based on their strength and nothing else.

Music editor Steven Spoerl and Tone Madison publisher Scott Gordon handled the assembly of this year’s selections and writeups. From rap to folk, acoustic to electronic, and hardcore to slowcore, there is a range of material here that shows Madison’s musical strength isn’t due to one specific approach, but to a stylistic diversity that always keeps things interesting.

Few tracks caught me more off-guard this year than the two bittersweet, Elliott Smith-esque rockers that Able Baker released back in March. An enormous artistic leap forward for what was already an impressive project, Able Baker’s final releases as a Madison-based act were extremely compelling looks at what’s shaping up to be an extraordinarily promising future. —Steven Spoerl

The largely sample-based production of Bell & Circuit pays off richly on “Nobody Loves Me,” a track that stretches through a few distinct rhythmic sections and dub-adjacent, nocturnal moods. Rippling horns, vinyl crackles, prickly guitar harmonics—Russell Emerson Hall brings a precise ear to all the elements, finessing them together. Crucially, “Nobody Loves Me” also shows Hall creating with a new sense of possibility, resulting in a track that is grander than the sum of the source material. —Scott Gordon

Making a solid first impression is never as simple as it seems, but Caryatids’ first full-length does it with a natural conviction. “Hard To Lose,” a scintillating highlight from their debut album, The End Of The Sun, is a stomach-droppingly beautiful track of yearning. Wrapped in heavy indie-punk trappings, “Hard To Lose” also features an unforgettable lyrical gut-punch. “And if the flames are claiming me and everyone / Then I would choose to be with you” is one of the most piercingly tender sentiments about the nature of existential comfort from a Madison-based act this, or any, year. —Steven Spoerl

The short but potent EP 92​.​29 GM​-​FM closes by basking in the sounds that live hip-hop band D’Funk & The Grease Monkeys have continued to flesh out since 2020’s Grease & Loathing EP. Rapper D’Funk launches into a series of quick-witted riffs on various famous MCs (“Three stacks gone like that, because I needed stuff / I was wary, retail therapy wasn’t cheap enough”), while the band builds a warm , assured groove around Stephon Marshall’s drums, Aden Stier’s bass, and Andy Gray’s plushy electric piano. Cheldyn Nelson’s vocals give the chorus a cheerful lift, and Maggie Cousin plays us out with a suave and dreamy sax part. —Scott Gordon

Hallowed Hands, the ambient pop project of Cicada The Burrower’s Cameron Davis, released 2022’s blissed-out Side Quest EP, which featured some moments of comic whimsy, as is the case on the exquisitely-titled “Miyamoto, Please Let The Mario Brothers Fuck. ” Davis’ penchant for melancholy, however, Side Quest provides its most resonant moment by way of closer “Depression Of Zelda,” which luxuriates in gentle, chiptune-esque tones before erupting into a subdued, but vibrant, epiphany. —Steven Spoerl

Jane Hobson, “If You Ask“

“If you ask, if you ask / Oh, there’s nothing I won’t do / If you ask, if you ask / I’d say screw it all, for you” is the painfully gorgeous chorus at the heart of Jane Hobson’s current career highlights. A gentle, warm acoustic song about dedication that’s in keeping with a long tradition of lovelorn folk songs, “If You Ask” sets itself apart by treading darker paths. “I’d call off work on Wednesday and / take 100 pills / I’d call in sick on Friday / Hoping that you’re home” is a dizzyingly bleak instance of entangling romanticism and defeatism, but Hobson’s weary sincerity helps the sentiment land . —Steven Spoerl

Multi-instrumentalist/producer Trent Prall’s lyrics on “Queen Of Wands” seem to both hint at some positive momentum and wrestle with forces beyond our control: “The Queen of Wands leading and I can’t escape it.” The plucky bass line and breezy momentum are both typical of Kainalu’s unflappable psych-pop, and so is bringing conflict into focus. “Queen Of Wands” is a showcase for Kainalu’s sharpest qualities. —Scott Gordon

The tragic loss of Low’s Mimi Parker earlier this year was a devastating blow, but Loveblaster’s debut single, “The Need To Fail,” softens it by just the slightest touch. Clearly drawing inspiration from the legendary Duluth band, Loveblaster confidently delivers that distinct brand of sometimes-menacing, always-lovely atmospheric slowcore that Low mastered, extending the band’s legacy in the process. To be clear, “The Need To Fail” is not a pale imitation either, as Abigail Self and Marley VanRaalte suffuse the song with enough distinct personality to mark out a territory all their own. —Steven Spoerl

Vanishing Kids’ Jason Hartman debuted two excellent, metal-forward projects during 2022 with Night Eyez and Old Spirit. Both projects had their share of head-turning moments, but the one that best encapsulated Hartman’s year was “Freezing Brain,” the epic closing track on Old Spirit’s self-titled EP. Demonstrating Hartman’s nimble dexterity as a guitarist as well as his penchant for haunted, keys-driven atmosphere, “Freezing Brain” is a raw, thrashing track that proves Hartman’s voice is as confident on its own as it is as a part of any other project . —Steven Spoerl

Sex, Fear’s debut album, Sex, Fear Presents:, pulls apart the seams of post-hardcore, creating pockets of loose, uneasy space between the dissonant barbs. (I keep calling it “Slacker Unwound,” in a nice way.) “Funko Pop” tumbles from panicked obsession (“I’m ambushed / By materials / And my life’s work crowns all the shelves / My urge for plastic I cannot quell ”) to passages of almost disorienting openness, where gentle guitar and cello lines criss-cross the void. If this really is a song about going overboard with one’s Funko Pop collection, it ends somewhere between acceptance and resignation: “I guess I can consider them my friends.” —Scott Gordon

Marty Finkel’s been releasing music on and off under his own name for several years. His Spinning Swords project, however, had been dormant for 16 years. September’s All We Thought Was Right ended that drought with 10 well-worn, rock-forward folk tracks including the standout “Had A Day.” There’s a rough-hewn, down-home DIY sensibility baked into “Had A Day” that recalls a disparate slate of ’90s alternative influences, from Sebadoh to Grandaddy to The Lemonheads, but Finkel anchors that unmistakable bit of hard-won nostalgia with an aplomb that feels genuinely timeless. —Steven Spoerl

TS Foss, “Grown Used To It“

“Grown Used To It,” the latest single from Tyler Fassnacht’s TS Foss project, is a lush, expansive folk track that incorporates beautiful piano figures, a sprightly bass line, mournful fiddle, and a good deal of wistful melancholy. Fassnacht’s vocals ache across “Grown Used To It,” along with lyrics that face up to the inevitability of disappointing outcomes. “In some ways / I’ve grown used to it,” Fassnacht repeats in the chorus that gives the song its title. A little bleak but incredibly beautiful, “Grown Used To It” is a tantalizing look ahead at TS Foss’ upcoming record, which is due out in spring 2023. —Steven Spoerl

Here’s what you need to know about new workplace protections for pregnant, nursing workers