‘How do you put yourself back together?’: 6 years after son’s suicide, Wisconsin mom forges ahead with service to others 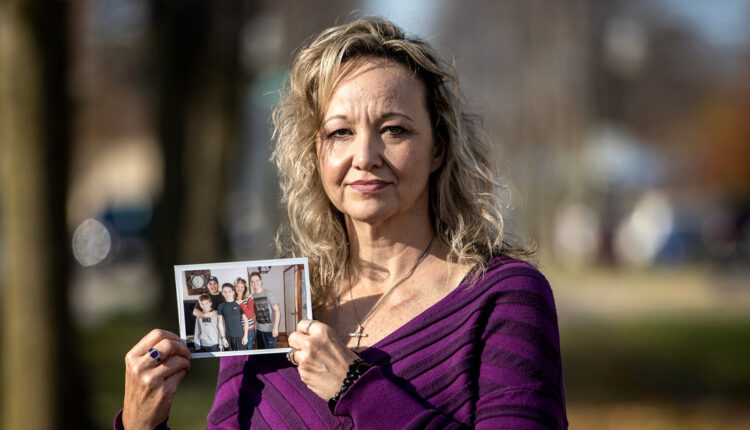 “It looks like he got a haircut,” Labatore said as she watched Lux ​​warm up on the Chicago Cubs’ field, about 60 miles from Kenosha, where Lux and her son grew up together. “To be here on this day, on a Mother’s Day, and actually watching him play means more than I can even express.”

When Lux jogged over to say, ‘Hi,’ to Labatore, she let out an excited, motherly scream. She gasped and said she was so happy to see him. He said he misses her.

“Obviously on those days, all you can do is think about Clay,” Lux said in a video the Dodgers released last month. “We comfort each other on those certain times where it’s hard for both of us — especially her. Anytime I can be there for her, I feel like it’s the right thing to do.”

Wednesday, Nov. 16 would have been Davison’s 25th birthday. In 2014, he died by suicide after fights with depression and injuries that derailed his time playing the sports he loved. Hey what 16

The Dodgers published a 40-minute video in October about the memory of Davison to advocate for mental wellness and suicide prevention. The video has more than 25,000 views.

Davisons number while playing sports was always 44. His loved ones take notice when the number shows up in their lives. They also want to keep the number close to them. Lux has it tattooed on his arm. It’s another way his childhood friend can stay with him.

“I love that he’s with you on every field,” Labatore told Lux ​​on Mother’s Day, pointing to the tattoo.

Labatore is the Kenosha Police Department’s peer support team coordinator and a former detective. She recently joined Wisconsin Public Radio’s “The Morning Show” to share how she goes about promoting mental health among officers. She said she doesn’t want anyone to go through what she went through.

Actually, it’s what she is still going through. While it has been more than six years since Davison’s death, Labatore said it never really gets easier. In and outside of her work at the police department, she continues to search for an answer to: How does she keep going?

Another birthday marks another test.

Labatore said her “Claybay” was a natural-born leader. People gravitated toward him. She said he was so much fun. He was constantly talking trash. He always played by his own rules — sometimes literally.

During pickup basketball games, he would make up rules as the game went along. He would suddenly change the game to make it take it or say double dribbling was allowed. When the game was going against him, his attitude and frame of mind could turn it around.

In the Dodgers video, Lux called Davison the life of the party. He was the funniest and loudest one around, cracking all the jokes. When Davison died, his mom remembered thinking: “Who is ever going to make me laugh like him again?“

He was a light in people’s lives. But Davison lost some of his own light after he broke his hand while boxing in eighth grade. He needed surgery and screws put in. He was devastated. He told his boxing coach that he could fight with one hand. But it wasn’t possible.

“Something broke in him, too,” Labatore said. “Now looking back, that’s where it all shifted.”

Later, he went on to play football as a high school freshman. But he tore his shoulder. In a video Labatore took from the hospital, Davison said it felt like his arm wouldn’t respond to anything he wanted it to. He said the injury felt like having a resistance band.

Labatore could see Davison’s life going downhill. He strayed from the good group of friends that considered her a second mom. Early in high school, friends Labatore said were a bad influence started coming around more.

Labatore said she felt like she was standing on the edge of a shoreline, watching her son drown. She tried to throw him life preservers. But he wouldn’t grab them.

Lux wonders what he could have done differently, too.

“Even at school, we had some classes together, and I could see him being a little more edgy, maybe a little more irritated easily,” he said. “Looking back at it, I think we probably should have pulled him back in. That’s hard. It’s tough to think about that.”

On June 21, 2014, Davison died by suicide. Labatore and others returned from a trip to the mall to find the house, once commonly filled with laughter, silent.

“Our whole world changed in a second,” she said through tears.

Four years before Davison died, the Kenosha Police Department lost two officers to suicide in five months. The police chief at the time, John Morrissey, said the tragedies were an awakening. He created a peer support program and tapped Labatore to lead it.

The program emphasizes shared personal or professional experience. On “The Morning Show,” Labatore said officers are more likely to open up to someone they work with rather than a therapist. She encourages officers to share with each other after becoming more comfortable with the program.

Morrissey said Labatore excels at helping others explore the questions that plague people who have lost someone: How? Why?

“I can probably name five officers right now that I know are alive because of Felicia and the peer team,” he said. “And I think it has changed many, many, many other lives.”

She turned the tragedy into action.

“You take that phone call. Somebody is not doing well. Later, we find out that they were very close to taking their own life — and they didn’t,” Labatore said. “Clay’s life mattered.”

The program is for officers and other department staff in crisis. Still, her work is also about prevention. She said it’s important to notice warning signs and act quickly.

But there are no guarantees. Through the program, Labatore was deeply embedded in the work of mental health in the years before Davison’s death. She had been trained. She saw the red flags. He just would not hold on to the life preservers.

Her training taught her that she needed therapy. She couldn’t recover from the loss of her son on her own. That therapy is one key piece to how she stays positive. Another is her faith. She has seen parents struggle to cope after losing a child. Labatore said she knows Davison, who seemed to be moving a million miles an hour every day, would want her to keep living.

She also gains strength from her advocacy work. Helping others keeps her moving forward through another birthday, another Thanksgiving, another Christmas.

“In the beginning I needed to make sure I was well,” she said. “Now, I know what works for me and my family, and now I feel like I can pour even more into other people to help them.”

Asked what advice she would provide others after a suicide, Labatore paused. She said she was thinking of who would be reading this. She wanted to get it right.

When Davison died, Labatore sought guidance from other parents who had gone through the loss of a child through suicide.

“(I) asked them a million questions like, ‘How do you do this?’ Because that’s it. You feel like you’re just so crushed. You are just broken in a million pieces,” she said. “How do you put yourself back together?”

To Labatore, so much of that question comes down to talking. With her therapist. With other grieving parents. With fellow police officers. With crowds. With Davison’s football team, which she spoke with a week after his death to let them know it’s OK to keep playing — it’s what he would have wanted.

Federal health authorities estimated about 12 million American adults seriously thought about suicide in 2020. In every room where Labatore talks, she hopes to reach someone with suicidal thoughts like Davison or another parent who is seeing red flags. She hopes to reach even more people struggling with suicidal thoughts, depression or other forms of mental illness. She said sharing saves lives.

Labatore wants everyone to learn about Davison. That’s why she was so grateful for the Dodgers video. She heard from viewers all over the country. She said some are donating to the scholarship program she set up in 2019 — an effort to get Kenosha County students into college for a career in mental health services. She wants to write a book, too.

Talking about Davison comes easy. She feels connected to him when she laughs. To remember Davison and raise money for scholarships, the family plans to hold a comedy night fundraiser in November next year.

Even if it comes easy, she openly discusses the worst moment of her life. In private one-on-one conversations. In front of an audience. On the radio.

On the morning of Labatore’s interview for this story, a friend texted her that she was thinking about her. The friend pointed out that it was 44 degrees outside that November morning.

There he was again.

If you or someone you know is considering suicide, call or text the three-digit suicide and crisis lifeline at 988. Resources are available online here.