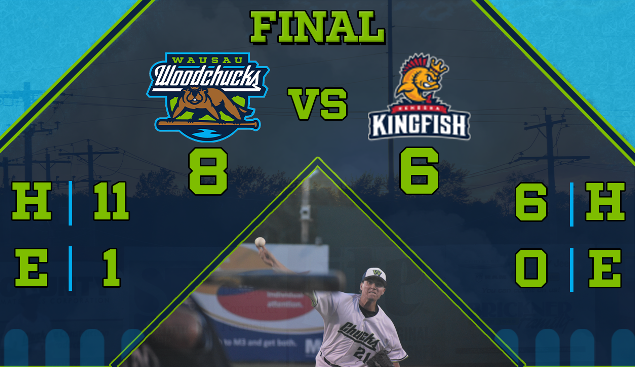 WAUSAU – Chase Hug drove in five runs to lead the Wausau Woodchucks went on to defeat the Kenosha Kingfish 8-6 in a Northwoods League baseball game Wednesday at Athletic Park.

Nick Marshall (West Texas A&M) started on the bump for Wausau and made quick work by only allowing one hit through the first three innings.

The Woodchucks (30-31) struck first in the bottom of the first inning with an RBI single by Tyler Cox (Eckerd) that drove into JC Ng (Pomona-Pitzer). Wausau loaded the bases in the bottom of the third inning just before a wild pitch allowed Hug (Evansville) to score, putting the Chucks up 2-0.

Kenosha (29-33) put up one run in the top of the fourth inning, but it would not go unanswered as the Chucks plated two more in the bottom of the inning. Cox helped the cause by smashing an RBI double to right field, scoring Ng from second base.

The Kingfish would tie the game in the sixth inning, but Hug would retaliate by blasting a massive two-run home run to silence their cheers. The Kingfish would load the bases with Chucks after a series of walks, and Hug would take full advantage with a two-run single in the bottom of the seventh inning, giving himself five RBI on the night.

Kenosha was unable to come back despite scoring one more run in the top of the eighth, leaving the Woodchucks to close out the game and bring home a win with a final score of 8-6.

Following a two-game road trip to Mequon to play the Lakeshore Chinooks on Thursday and Friday, the Woodchucks will return to Athletic Park on Saturday to face the Fond du Lac Dock Spiders at 6:05 pm There will be fireworks following Saturday’s game, sponsored by Crystal Finishing Systems. Tickets can be purchased online at https://wausau-woodchucks.nwltickets.com/ or by calling 715-845-5055.