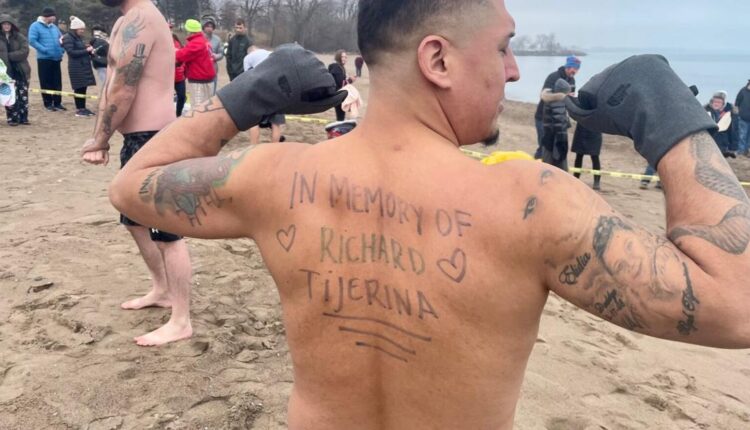 There’s nothing like starting the new year with a crisp dive into frigid Lake Michigan with hundreds of other area residents.

At 11 am on New Year’s Day participants braved the cold and waded into the waters at Simmons Island Beach, 5001 Fourth Ave. for the 2023 Polar Bear Swim.

The free event, organized by Brian Vaccaro of Diver Dan’s Scuba Center and the Kenosha County Dive team, included men, women and children. Vacarro and others from the Kenosha County Scout Leaders Rescue Squad helped ensure the event was safe for swimmers.

Participants began gathering at the beach around 10:30 am and many wrapped themselves in blankets and sipped hot drinks.

The annual event had been canceled in recent years due to dangerous currents and freezing temperatures. On Sunday, the weather was mild, and temperatures hovered between the high 30s and low 40s.

“We’re excited to have it this year because it’s been a while between COVID-19 and the weather of the last few years,” Vaccaro said. “It’s been a tradition that’s gone on for a long, long time. It’s one of those traditional things some people want to try to do. I’ve also heard of some people participating because they lost bets.”

Vaccaro suggested participants “run into the water as quickly as you can.”

“The faster the water hits you, the better,” Vaccaro said. “Make sure you have somebody to help warm you up afterwards and wear something on your feet. … Then get dry as quickly and get into your nice warm car.”

Although the weather was mild, Vacarro said the cold can still surprise folks.

Bryan Tijerina, of Kenosha, said he took part in the event to honor his father.

“I’ve always wanted to do it,” Tijerina. “I wanted to try something new to start out this new year, and do this in memory of my dad who passed away on Sept. 21.”

His father, Richard Tijerna, was a former Kenosha County Sheriff’s deputy and US Army veteran.

“I’m a little nervous,” Bryan Tijerina said. “My plan is to go into (the water) to my knees and then drop.”

Kerkman’s sons offered her a blanket when she exited the water.

Kenoshan Eleanor Dombkowski, 11, took part in the event for the first time Sunday. She was accompanied by her parents.

“I just had a passion to do it,” Dombkowski said before the swim. “I’m a little bit nervous.”