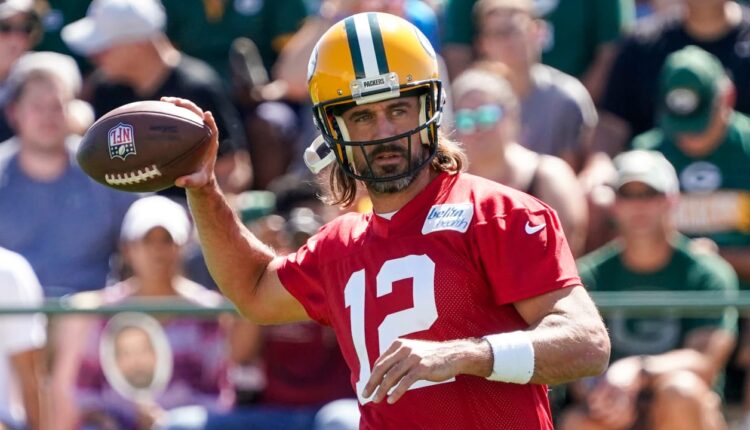 Aaron Rodgers might not be as concerned about his wide receivers as many Green Bay Packers fans seem to be.

Rodgers was asked Saturday about his receiving group in light of the loss of Davante Adams, who was traded to the Las Vegas Raiders this offseason in a franchise-changing deal. The quarterback doesn’t appear daunted by the challenge of establishing new targets in this offense.

“I like the guys that we got,” Rodgers said Saturday on Training Camp: Back Together Saturday. “Obviously not having Davante, who took the lion’s share of the targets last year and had an incredible season, there’s gonna be the same amount of balls and yards and touchdowns to go around. So now it’s a matter of who’s going to be in those situations to make those plays.”

One incumbent who appears poised for a big role is Allen Lazard, who finished last season strong and ended 2021 with eight touchdown catches. After joking earlier this week about both Adams and Lazard being future Hall of Famers, Rodgers turned serious about his clear expectations for Lazard — in a contract season for the receiver, no less.

“Obviously, Allen Lazard is going to step into the No. 1 role,” Rodgers said, “and I think it’s going to be a very seamless transition for him as a primary blocker and kind of a niche guy for us, to get an opportunity to get more throws, be No. 1 in the progression more often.”

There also could be help from the Packers’ two WR draft picks, second-rounder Christian Watson and fourth-rounder Romeo Doubs. Watson remains on the physically unable to perform list, with Rodgers saying he expects him back “in a few weeks.”

In his absence, Doubs has been one of the early standouts of camp, making several impressive catches, according to practice observers. Although Rodgers hasn’t traditionally leaned on rookies heavily, Doubs clearly has made a positive early impression.

“Romeo Doubs has had a really nice start to the camp,” Rodgers said. “He’s been getting a lot of attention based on some of the plays that he’s made. I like the approach. Very understated kid, very humble kid from kind of inner city LA, made his way to Nevada.

“I was sitting with him at lunch the other day and really just marveling. It’s surprising how many teams passed on him. Whatever reason it was, we all feel really good about Romeo and the start he’s gotten off to.”

Rodgers also threw bones to his longtime running mate, Randall Cobb, whom Rodgers thinks is “still an excellent slot receiver,” and free-agent signing Sammy Watkins, whom Rodgers said “has a lot of experience” and also “a lot to prove .”

“I think those guys are a little more dangerous because they have so much more to play for,” Rodgers said.

But right when the warm fuzzies were flowing, Rodgers dropped a pretty big caveat: The Packers haven’t even had full-contact practice yet.

“The great equalizer — I’ve said it many times, I’m sure you feel the same way — is pads,” he said. “When we put the pads on next week, then we’ll see how good we are up front, how confident we are outside, and I think you’re gonna see how good our defense can be as well.”

We also could find out then if Rodgers is as confident in his reshaped receiver group as he seems to be in the early camp days.

Madison Bumgarner again tried to be the “Pitching Police.”