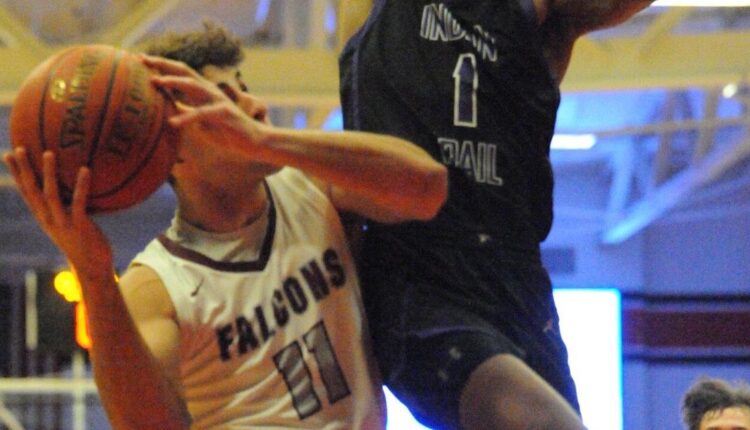 He got the final rebound, played the back-breaking man-to-man defense, and scored most of his team’s points down the stretch.

And he truly believes his Indian Trail boys basketball team can make it all the way to Madison and hang a championship banner in the rafters this season.

Not to mention this guy hopes to not only play Division 1 college basketball someday, but also land a spot at the highest level – the NBA.

A lot of kids say these things and they don’t happen, but when you’re 6-foot-8 (he says he’s 6-7), can jump out of the gym, are built like a football player, and are only 16 years old, who’s saying no?

Mannaseh, or “MJ”, Stackhouse, is a Zion, Ill. native that has lived in Kenosha for the last 10 years, and he travels all around the region playing the game he loves, hoops, and his immense talent and potential was on full display Tuesday night at the 10th annual Doctors of Physical Therapy Holiday Hoops Classic.

Stackhouse stepped up late in the game, willing his Hawks to a 52-47 victory over Kenosha County foe Central in the night cap of the first day of the annual event that saw four boys games, with Racine Horlick, Racine Prairie, Lake Geneva Badger and Indian Trail all picking up wins.

MJ’s 26-point, 15-rebound performance helped the Hawks overcome a 27-21 halftime deficit – and 11 first-half turnovers – as Indian Trail outscored the ice-cold Falcons 26-14 down the stretch to win the game.

“It was amazing, last year they beat us by 20 or 30, and it feels good to come back and beat them,” Stackhouse said after the game. “It wasn’t the most precious win, but hey, we came out with the victory, and we played good.”

Indian Trail improved to 5-2 on the young season, while Central falls to 5-2.

After the game, Indian Trail head coach Robert VanDyke said the defense stepped up down the stretch, and sloppy play was erased in the second half.

“I wrote one number on the board, 11, and that was how many turnovers we had in the first half,” VanDyke said. “You can’t have 11 turnovers and beat a good team like that. Our goal is 10 or less. We sat down defensively, did really well for a long time. We both went on scoreless stretches.”

“We missed a couple layups, too, and we could’ve won by more, but credit to Westosha, they have hands everywhere. When we got up five there, we called a timeout and I said we needed a defensive stop, knock a couple free throws down, and we’re good. LJ and Jackson made big front ends at the line, and obviously, we were able to defend how we wanted knowing they needed a three.”

Indian Trail has only lost to Germantown and Kaukauna, two state powers, and he attributes a selfless attitude to his squad’s success.

Westosha led by as many as seven points, 33-26, but the Hawks, behind Stackhouse and Jackson Wilhelmson, fired back for a 14-6 run, capped by LJ Dagen’s runner at the 6:30 mark.

But Stackhouse was there again, cleaning up a missed shot with a put-back layup, like he was able to do all night long with his jumping ability and sheer athleticism, and Trail led, 50-47, with 35 seconds left.

Stackhouse picked up Griffin, an extremely quick, shifty point guard, at the 3-point line, stuck to him like glue along the baseline, and forced a missed reverse layup to preserve the three-point lead.

Then, Wilhelmson hit a free throw and got another big rebound, along with Dagen’s free throw, and Stackhouse fittingly secured the victory with a rebound off a long three with 6 seconds remaining.

“We are doing way better than last year, and I think we can all the way to Madison if we really want to,” Stackhouse added.

John Kinzler, who helped the Falcons build a comfortable first half lead (Central led the first 30 minutes of the game), scored nine of his 10 points in the first half.

For the Hawks, Kayden Johnson provided a nice perimeter to complement Stackhouse’s size on the interior.

Johnson was able to push the pace and get the more athletic Hawks out on the break and score at the rim, finishing with 13 points.

“I have no problem putting anyone in the game in any situation,” VanDyke said. “That’s huge when you have 13 guys that can flat-out play. The temperature of the team is that we’re selfless.”

Stay tuned to www.kenoshanews.com the rest of this week for more from the Holiday Hoops Classic at Carthage College and UW-Parkside.