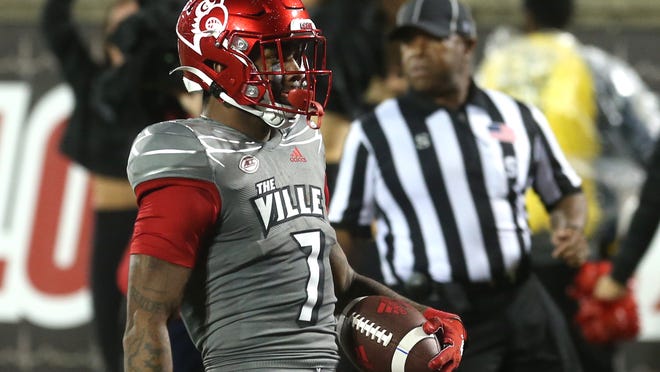 Taurus Jones chased Louisville quarterback Malik Cunningham to the sideline, then stuck to him to the wall behind the bench.

The James Madison linebacker appeared to have used excessive force to tackle Cunningham well out of bounds. And it sparked a fight.

Multiple Cardinals taking exception to the perceived offense rushed to Cunningham and swarmed Jones. Dukes players came to Jones’s defense. And the two teams, late in a game U of L led 27-10, pushed and shoved for several moments.

Jones assessed a personal foul for 15 yards, which was ejected from the game as Louisville coach Scott Satterfield came to his quarterback’s defense.

Kei’Trel Clark:Louisville football DB knew he was destined for a breakout game. Here’s why

Except there was one problem. Cunningham appeared to have grabbed Jones’s facemask before being pushed out of bounds, didn’t let go and the players collided with the wall below the bleachers. Jones then appeared to get up and signal that he was grabbed by his facemask, pleading his innocence.

Officials, after originally ejecting Jones, eventually reviewed the play. They overturned Jones’s ejection but upheld the penalty, and they assessed Cunningham a 15-yard facemask penalty. Several minutes after the fight, the down was replayed after the penalties offset.

Cunningham went on to throw touchdown to Ahmari Bruce-Huggins to push the lead to 34-10 with 6:29 left to play. The Cardinals (5-3, 3-3 ACC) are a win away from becoming bowl eligible.

You can watch the moment here: