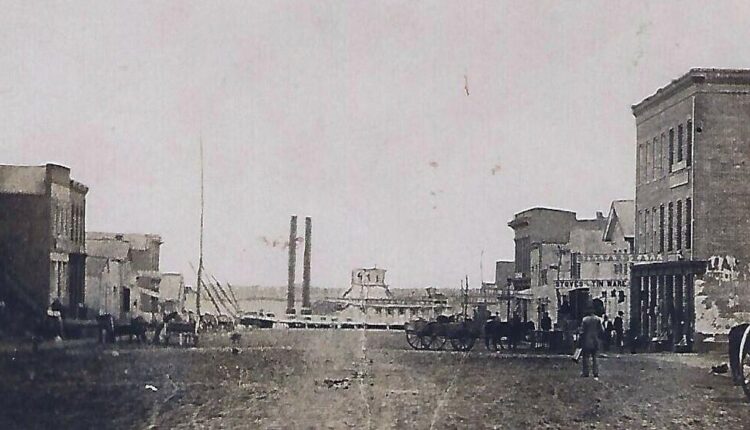 When American railroads literally received millions of acres of land as grants from the federal, state and local governments in order to encourage rail construction, much of that land needed to be sold to provide money for materials and labor.

Advertising this vast amount of real estate required descriptions for people totally unfamiliar with anything west of the Missouri River. Land in Cass County required great copywriters’ skills like those written in 1879 promoting Burlington & Missouri River Railroad’s Plattsmouth. Agent DH Wheeler said the “cheap pastoral landscape of Cass County has no superior, prosperity is ever present, food is abundant, you see no poor, no crowded throughfares of the East, everyone meets you with a smile, comfort and prosperity abound.” Even negatives were turned into positives, noting there were no forests, stumps or stones to be cleared.

Before Cass County, or Nebraska, or even the United States existed in the area, known visitors included Lewis and Clark in 1804, who spoke of the confluence of a river they named Platte which joined there with the Missouri River, and Manuel Lisa who visited in 1807.

In the spring of 1853 the Secretary of War, interestingly then Jefferson Davis, granted James and Martin O’Neil the right to establish a trading post on the west bank of the river. The O’Neils then disassembled their building at Coonville, transported it across the then-frozen river, and rebuilt it as a two-story log structure known as Old Barracks and a cabin just to its northwest at the foot of what would become Plattsmouth’s Main Street.

With the official formation of Nebraska Territory on June 24, 1854, Samuel Martin was legislatively granted a license for a ferry from Coonville and with his settling on the west shore and his assumed residence at Old Barracks, he is usually considered the first settler in Cass County.

Cass County became one of Nebraska’s first eight counties in 1854, being named for Brigadier General Lewis Cass, an Ohio attorney, Secretary of War under President Jackson and US senator from Michigan, active in creating the Kansas-Nebraska Bill, and US ambassador to France .

As the territorial legislature debated the site for Cass County’s seat of government, the two contenders were Plattsmouth and Kenosha, 12 miles south on the Missouri River. Plattsmouth’s lobbyists created a fictitious map showing the Platte River 10 miles north of its actual site which caused the legislature to choose Plattsmouth as the first county seat.

In October the Plattsmouth Town Co. was established and the following month, acting Nebraska Gov. TB Cuming established two voting precincts in the 550 square mile/352,000-acre Cass County. One precinct was at Samuel Martin’s Old Barracks and the other at Col. Thompson’s house in Kenosha while the county’s population was recorded at 354.

On Dec 15, 1854, Plattsmouth was officially named Cass County’s seat and was platted Aug. 15 while the second county census showed the population at 712. A judge then reassigned the two voting precincts as Plattsmouth and Rock Bluffs (sometimes Rock Bluff).

The first county election was held Nov. 4, 1856, with three county commissioners elected and county borders redefined. The 1860 federal census showed Cass County’s population at 3,369, and it was further noted that there were 16,963 acres under cultivation and 362,800 bushels of corn had been harvested.

The Cass County seat was contested at an election April 15, 1861. The results were: Plattsmouth 368, Rock bluffs 223, Mt. Pleasant 109 with 28 votes from other various places. In 1870 the Burlington & Missouri River Railroad built through Cass County reaching Lincoln July 26, causing Plattsmouth to become an increasingly active point in the county and created the beginning of a railroad shop facility there.

Another county seat election on Oct. 18, 1875, resulted in Weeping Water receiving 1,034 votes, Plattsmouth 856, Louisville 147 and Rock Bluffs 93 but the Nebraska legislature required a 3/5ths majority to move a county seat.

The primary result was to stimulate Weeping Water’s electorate to push harder. Another election May 14, 1878, showed Weeping Water with 1,393 votes, Plattsmouth 1,061, Louisville 64 and miscellaneous sites 81, but the 3/5th rule still left the county seat at Plattsmouth which was growing rapidly.

The Missouri Pacific Railroad built a north/south path through the county in 1881-82. In 1890 Cass County reached its peak population of 24,080 while the Rock Island Railroad also built through the county. Though plagued with charges of a stolen election and fraud, a county bond financing a new, extant Cass County Courthouse in Plattsmouth, paved the hopes of moving the county seat.

Cass County currently lists 15 cities and a population estimated at 26,870. Kenosha is but a memory, Rock Bluffs boasts its historic school building while Weeping Water is home to about 1,000.