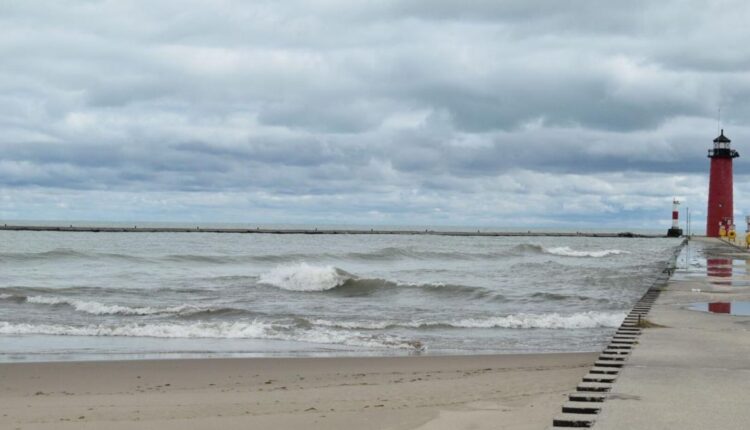 Kenosha and other parts of the southeast Wisconsin region received a major amount of rainfall—even record-breaking in the Racine and Caledonia areas—caused by a slow-moving weather system which stalled temporarily over the area on Sunday.

Kenosha received an official total of 4.81 inches of rainfall Sunday as a low pressure system developed and lingered over the area throughout the day. The city’s one-day record is 5.65 inches set on Oct. 21, 1965.

“What happened with this particular low pressure system that makes it different is what we call a closed low,” said Rebecca Hansen, a meteorologist at the National Weather Service in Sullivan. A closed low is defined as a “low pressure area with a distinct center of cyclonic circulation that can be completely encircled by one or more height contours.”

“Because this was more of a slow moving system, and it sort of waffled over the area, it kept these bands of rainfall over Wisconsin for a longer period of time,” Hansen said. “The big thing with this system, though, is because it lengthened over the area for such a long time, we were able to accumulate a lot more rainfall before it moved off.”

Hansen said other factors were present, such as moisture in the system, warm and shallow clouds and high rainfall rates of one to two inches per hour.

Hansen said there were also 40 miles per hour winds in the region and waves up to 8.5 feet in Racine and several feet above normal in Kenosha County.

Despite the heavy rainfall, the Kenosha Water Utility did not have to utilize bypass pumps to pump water out of the sanitary sewer system and into the storm sewer system or bypass water at the wastewater plant.

“We have a 30 million gallon equalization basin, which is like a large storage facility that we can utilize during heavy rain events like this, and we did pump into there.” said Curt Czarnecki, general manager of the Kenosha Water Utility Department. “It’s almost like a buffer tank that allows us to store flow there and then treat it through the normal treatment process and and put it back into Lake Michigan, so we did utilize that.”

Czarnecki said the dryness of the ground also helped reduce chances of local flooding as the rain was able to soak in.

The department worked throughout the day Sunday to monitor weather conditions.

“I always like to just give our employees a pat on the back just for their dedicated efforts, you know, putting their personal lives on hold to make sure we’re upholding our high level of service to our customers,” Czarnecki said. “Our employees did a great job Sunday and helped protect property.”

“However, the Fox River is rising slowly,” Abongwa said. “We are monitoring it just to stay on top of it.”

Kenosha County Parks Director Matt Collins said Petrifying Springs Park was not forced to close due to rain, but it likely would have in the past.

“All of the renovations of the Pike River on the Mount Pleasant side and in Petrifying Springs Park are paying dividends,” Collins said.

The rainfall did impact the Washington Park Municipal Golf Course, though, as it was closed Monday due to the rainfall. According to city officials, gas carts will not be allowed on the course for the next several days.

After the effects of the rainfall, the 2022 Santo Principe Memorial Senior Golf Tournament was rescheduled for Sept. 20.

Further north, the Wisconsin Department of Transportation shut down a portion of westbound I-94 and rerouted traffic onto WIS 16 for water removal operations.

Between Sunday at 6 am and Monday at 10:40 am, WeEngeries restored power to more than 34,000 people in the southeastern Wisconsin area who reported a series of scattered outages.

“This definitely wasn’t the worst, but I would say it was a very unique weather pattern as it really didn’t move east or south at all; It just kind of kept swirling right over southeastern Wisconsin. I think it just kept gaining steam and just kept dumping water on us, which was kind of not typical of our geographical area.” Czarnecki said. “All things considered, we were able to, I guess, weather the storm fairly well.”

Unless we experience pain, most of us give little to no thought about our knees on a daily basis. However, healthy joints are super important …

From blueberries to beetroot, many different fruits and vegetables are regularly referred to as “superfoods” .

Overfilling your washing machine could be adding unnecessary costs to your energy bills.

The age-old ‘better late than never’ certainly rings true when it comes to saying thank you! Buzz60’s Maria Mercedes Galuppo has the story.

Chronic pain – pain that persists for more than three months despite treatment – is a leading cause of disability worldwide.

Getting everyone out the door in time isn’t the easiest job in the world and here’s potentially why. Buzz60’s Chloe Hurst has the story!

After a tough workout or long walk, it’s not uncommon to have sore muscles the next day. But if muscles feel stiff or more difficult to move t…

According to several viral videos, chewing gum is a quick way to define your jawline, however, experts say that might not be the case.

The fast pace of modern life often makes it difficult to maintain a balanced diet and lifestyle. If you are feeling overwhelmed by work, have …

There are still a few ways you can get free or affordable COVID tests or at-home rapid test kits. Trinity Chavez has the details.

Doctors say that wrinkles around the eyes are common because of the delicacy of the skin in that area.

Liver cancer is cancer that begins in the cells of your liver.