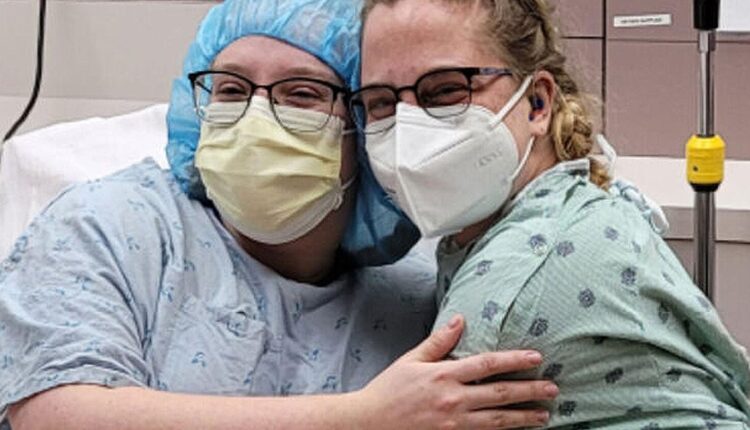 When a family with Kenosha ties together this Thanksgiving, they will also be celebrating together the culmination of something that began nearly a quarter-century ago.

On Oct. 23, 1998, when Madison Conine was just 2 years old, she received a kidney transplant from an anonymous donor.

She was born with Prune-Belly Syndrome, also known as Eagle-Barrett Syndrome, a rare disorder that affects the stomach muscles, bladder and kidneys.

The Kenosha native would grow up with that stranger’s gift, attend Tremper High School and ultimately prepared to go off to college.

But in 2020, her doctor informed her that her donated kidney only had about “two years left.”

“At that time, it was roughly 20 years use with the kidney. An average donor’s lasts about 10 to 15 years,” Madison said. “So when they told us that we will need another transplant within the next two years, we said ‘OK, how are we going to go about this?'”

A donor was already lined up, and they were such a close match that there would be no risk of Madison’s body rejecting the transplant.

She would get a kidney from her twin sister, Savannah.

Know it was coming

Even as children, the twins knew Madison would need a second kidney transplant at some point. While Savannah was the best option, as they are genetically identical, Madison said she made sure never to try and force the decision from her sister.

Savannah, however, said she always assumed she would be the next donor.

“I always knew it would come to this. It just made the most sense,” Savannah said. “It was never a question of if, but when.”

While Savannah had made her decision, she said it took months before she could move forward with the transplant. She went through a lengthy screening process, all the while balancing her efforts to get into medical school and a move to Arizona.

Researchers from Johns Hopkins University say that drinking a cup of coffee a day may reduce your risk of acute kidney injury (AKI).

“I felt like the process was really slow,” Savannah said. “The wait was very frustrating.”

Both realized that, between the surgery and Madison’s dialysis, they would have to put their school plans on hold until after the surgery, which they said school officials allowed.

On March 3 — more than 23 years after Madison’s first kidney transplant — both siblings were put under anesthesia.

“I was scared but that was mostly because I’d never been put under anesthetic before,” Savannah said. “I knew I would be fine, and Madi would be OK as well.”

Madison was more worried, however.

“I’m always anxious the night before,” Madison said. “But keep in mind, this is my 50th surgery.”

The transplant was a success, and today, both siblings are healthy and working through their schooling. Madison lives in Mukwonago and Savannah is in medical school in Arizona, but they still FaceTime regularly and will see each other again this Thanksgiving.

The main takeaway Savannah wants people to have is the importance of organ donation.

“I always think there should be more organ donors,” Savannah said. “People are really freaked out by organ donation, but I think it’s so important.”

“Maximize What You Can Do”: LeBron James Weighs in on Aaron Rodgers’ Misery at Green Bay Packers Amidst Lackluster 4-7 Run