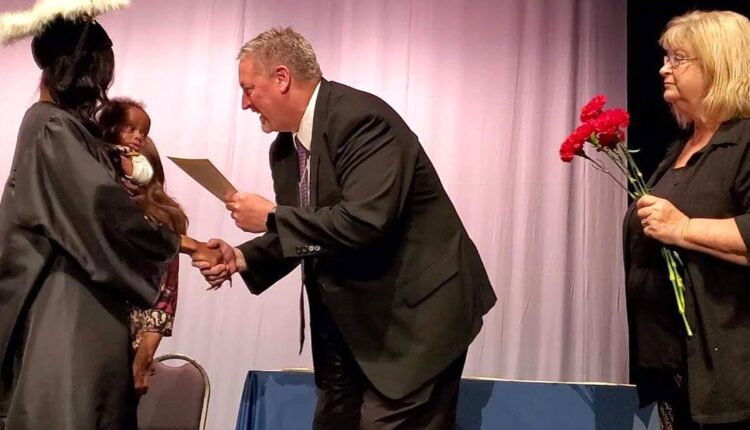 A rainy and unseasonably cold Thursday didn’t dampen the spirits of dozens of students decked in black gowns and caps, some decorated, as they lined up to take their rightful seats at the Ralph J. Houghton Performance Center at Reuther High School.

They were graduating with each other and they belonged there.

The ceremony, unlike that of the traditional high school setting, recognized Kenosha Unified students who, for a number of reasons, were not able to meet credit requirements to graduate with their cohorts. The district’s program is an alternate route to graduation in which a diploma is issued for those who meet all requirements and have taken and passed the Iowa Tests of Educational Development.

There were a total of 228 ITED graduates, with representatives from all KUSD high schools except LakeView receiving a diploma through the High School Diploma Options (HSDO) program. Of those, 135 crossed the stage during the ceremony.

“ITED diplomas are not just handed out, it’s earned. ITED Class of 2022 (members) have gone through struggles, trauma, all tough situations and still, still got their high school diploma,” said Eitan Benzaquen, Hillcrest principal, who delivered the commencement message to a nearly full house. “That’s what I’m talking about. That’s the earned part.”

Benzaquen described the Class of 2022 as one that felt “belonging with one another other.”

“(They) mastered great values, became independent leaders and are generous to each other and others,” he said. To that he extended his hand, asking them to declare themselves before the hundreds of friends and family members who’ve helped them along the way.

It took a couple of tries, but they loudly and proudly proclaimed, “We are the Class of 2022!”

Benzaquen characterized the students as “risk takers,” each of them striving to master personal growth … to become better as humans.”

“While other super people were trying to master things, Class of ’22 was mastering values ​​… like hard work, dedication, kindness, resilience,” he said.

But, it doesn’t happen overnight. He said they went through trials and tribulations and had their failures.

“Let’s be clear, school is not the only place that has hard work,” he said. “But you work up every day.”

Bolstered by coaches, school staff, caregivers, along with friends and family by their side, “you accepted the challenge.”

“Teaching each other never to give up, with this independence they gained,” he said. Then, in one voice they rang out “We are the Class of 2022!”

“I love it,” said Benzaquen, grinning.

“Class of 2022 degrees and staff gave so much to each other without wanting anything in return,” he said. “It’s heartwarming.”

Among the most generous things they gave each other was another chance, he said.

“And through this generosity came … the Class of 2022,” he said. “I appreciate how resilient you are. You guys have come back from the toughest situations. This will serve you well in life.

“Although this ceremony does bring a close in another chapter in their life, the next chapter is an exciting one. Whether you’re headed to college or the workforce, you will always be making our community better with your belonging, your mastery, your independence and your generosity,” he said. “Do not accept anything less than the best you truly are a great group of people. I wish you only the best. Congratulations.”

Kim Fischer, Unified’s regional coordinator for secondary school leadership, then signaled the moment they were waiting for as the auditorium continued to buzz.

“All of the graduates listed in did successfully pass the Iowa Examination and all required components of the Kenosha Unified School District’s high school diploma option,” she said. “Therefore, it is my great honor to endorse and present the KUSD Class of 2022 and I respectfully ask that they be granted their diplomas.”

One by one and school by school they took their turns, some took their bows, they clapped when their friends and families whooped and whistled. After most had been seated, colorful confetti was launched from the balcony and the celebratory paper rained down them.

For Jahnanay Reed, earning her diploma was a long time coming. Near the end of December, she gave birth to her son Tamir, now just over 5 months old. As she balanced school and life, she carried him with her onto the stage. He would be there with her as Indian Trail High School and Academy Principal Scott Kennow congratulated her on a job well done and a diploma well earned.

KHN’s ‘What the Health?’: Taking a Shot at Gun Control