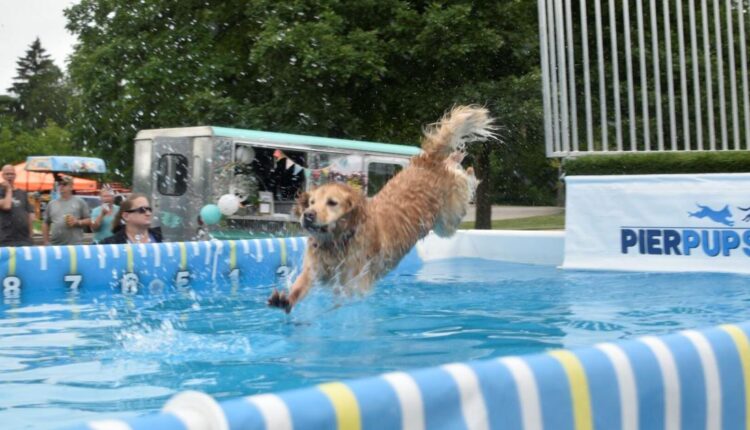 While most dogs before him took a long head start, Augie, a Staffordshire bull terrier, was too excited and went for his jump in the pool and took his head start from a few feet from the edge of the water.

“We are very lucky to have everyone come out, and Shadow Dogs, who agreed to do this for us, has been amazing,” said Connie Ader, Safe Harbor Human volunteer coordinator and assistant event coordinator. “Getting the support from all these other locations as well is greatly appreciated.”

During the dock diving competition, owners lead their dogs to the desired starting point. From there, owners walk to the edge of the platform, right before the water, to encourage their dog to run and jump in the pool.

Measurements for jumping lengths are listed on the side of the pool, and the measurement of the jump is determined by where the base of the dog’s tail breaks the surface of the water.

Andy Cigallio, a Kenosha resident, came to the event with his wife and his lab, Vito, to see if Vito would want to jump in the water. After lots of coaxing, Vito made it in the water and swam to the ball.

“He’s very athletic, he’s very fast and he can jump really high so I thought this would be perfect for him,” Cigallo said. “He got a little nervous with that water.”

Some dogs at Pup and Pints ​​went for the photo, rather than the pool. Meaghan Foley, a Greyslake, IL, resident came to the event specifically for the portrait session for her dog, Pearl.

“I take photos of her and I love photos of her,” Foley said. “It’s professional (photos) and it benefits Safe Harbor, so it’s kind of a win-win.”